Every spring, my family meets several other families in Charleston, South Carolina for a long weekend. The purpose of the trip, or at least what we tell other people, is to participate in the Cooper River Bridge 10K race. What it's really about, though, is getting together with old friends and new ones for a week of hanging out in a super rad beach house. 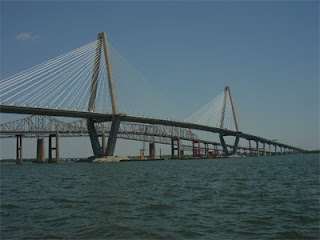 The house we rent changes year to year, and so do the participants, and there have been years when I haven't been able to make it for various reasons. The bridge we run/walk over has even changed from the Silas Pearman to the brand new Arthur Ravenel bridge in 2006. But overall, this weekend hasn't really changed.


And for that, I am thankful.


And I love that I love it as much now as I did when I was eight.
Good for me, that my parents created this tradition for me and my brother. We've created a lot of memories from this trip over the years.
Bad for the blog, as I had to find something to do that I've never done before. But if I'm being honest, there really isn't anything that I'd want to change about the weekend. I like it just the way it is. 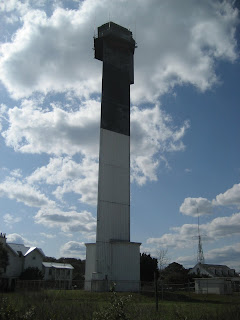 On Friday, I did wake up in Charleston, thankfully, just as my mother said that I should. And like all Cooper River Bridge Run weekends, we started the long weekend with breakfast, followed by some inside jokes about previous beach trips, then a walk on the beach, some more jokes, and then lunch.


That's what we do: we eat, we run, and we laugh. Sometimes we laugh first. We laugh often.


After lunch, which consisted of two of my favorite foods: fish tacos and oysters, we walked back to the house and decided we'd lounge by the pool, and laugh (and probably eat) some more.

It was a great day. The same day that I've had, give or take some added spouses and children and an elevator in the house (fancy), nearly every year for 20 years. At around 3pm-4pm, I realized I was still short of doing anything that I'd never done before and I started to get anxious, which I was pissed about because here I was doing what I love to do with the people that I love to do with it.


I'm an anxious person by nature, but this blog takes it to a new level quite a bit because if I'm not stressing about doing something I've never done before, I'm stressing about being behind or not writing. So I was nervous. Partly because I had to figure something out, but mostly because I didn't want to leave the party (which wasn't much of a party, just more loafing by the pool).


I decided to take my nervous energy elsewhere, so I jumped in my car and drove to my brother's house so that I could get on the Internet and blog for a little bit. I thought it might make me feel better to get some work done, but I felt like I was missing something back at the house, so after an hour, I started to head back to my family and friends.

As I made my way across the Sullivan's Island bridge (one of the greatest drives I've been fortunate to have made numerous times), I made up my mind to stop stressing and just enjoy the weekend.

While crossing the bridge, I looked to my right, and saw peeking out above the trees the Sullivan Island Lighthouse and remembered that despite having grown up in South Carolina and living in Charleston for a year, I'd never been there. 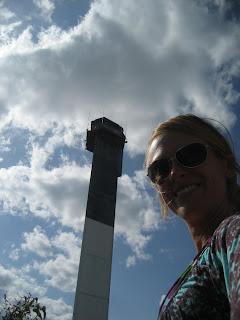 
I love lighthouses, because where there is a lighthouse, there is the sea, my favorite place to be. I was actually disappointed in myself for having never been to this one. My only defense was that I lived on the other side of the city when I lived in Charleston and frequented the Morris Island Lighthouse instead.

The Sullivan's Island Lighthouse has an interesting triangle shape and is painted black on the top, white on the bottom. It's positioned in the midst of a residential area, so I actually parked in the front of someone's house to walk over and take a picture. I planned on climbing to the top, or at least going inside, but since the National Park Service took over the control of the lighthouse's upkeep in 2008, the lighthouse will only be open to the public a few times a year.


So that's the new thing I did on this day, and I snapped a few artsy shots of the lighthouse too, also something I've never been able to do.


I've seen it, I know where it is, and I made my visit there happen quickly, so I could get back to enjoying the people most special to me, just as I have been doing for 20 years.

Charleston on Dwellable
Posted by Stephanie Gallman at 12:20 PM