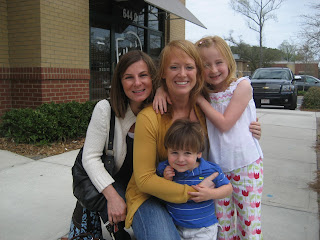 I had to keep myself busy, and find a way to acknowledge this day in a positive way.

Day 182's thing I've never done before was to celebrate my half-birthday.

I started the day having lunch with my best friend from high school, Danielle, and her family.

The meal was good, the company was better and I laughed out loud when Danielle's daughter Karson dropped her fork while eating, turned to me and said, "Aunt Steph, have you ever had lice?"

Though that was a question I've never been asked before, this conversation really had nothing to do with my half-birthday celebration. With only six months left of my twenties, though, I loved that in her ever-hilarious way, Karson was able to take me back to my childhood by bringing up a word I hadn't heard in probably 20 years.

I laughed as I responded, "Lice? Yes, I had lice a looooooong time ago. Have you?"

"No," she replied, going back to eating her meal. 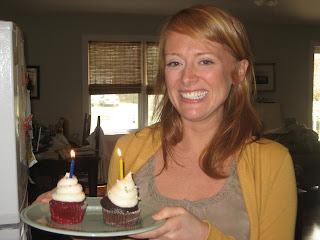 I looked at Danielle as if to say, "Why is she asking me about lice?"

As humorous as this little exchange was to me, and as joyful as all of my visits with Karson are, I couldn't help but be reminded of how fast time is flying. She's seven-years old. She starting to lose teeth. She knows words like, "lice."

I find that the best thing to do when I'm feeling down about my age is to hang out with someone older than me. The obvious choice was my friend Adam, who is exactly two years older than I am. Exactly.

Adam and I met in college and I remember when I found out that we were born on the same day, I was floored. At that time he was the only person I'd ever met that had the same birthday as me. Like it was inconceivable to me that someone else could've also been born on September 27th.

I was even more shocked when I went to Adam's house and noticed that he, like me, set his clock 14 minutes fast.

I called him when I was done with lunch.
"What are you doing?" I asked.
"Nothing," he said. 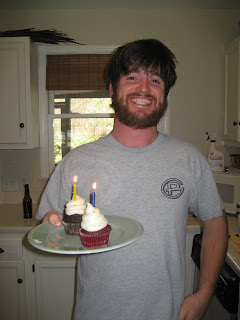 I told him I was coming over to his house and that he was making his blog debut on Day 182 and we were celebrating our half birthdays.
I walked to Cupcake in Mt. Pleasant and bought four cupcakes, all different flavors.
"Happy Half-Birthday!" I shouted when Adam answered the door. It's a good thing we're such good friends, because he probably would've thought I was insane otherwise.
He happily supports my crazy ideas and though he's never said so, I know he would do anything to support the blog, even if it meant celebrating a non-holiday and eating cupcakes on Sunday afternoon.
We blew out the candles and made a wish. I wished that the next six months would go slowly and that when they were finally over that I would be level-headed about it. And that I would become more interesting and more beautiful when my real birthday did arrive.

I'm a greedy wisher, what can I say?

We ate our cupcakes, which were amazing, and then I had to return to Atlanta to get started on the second half of this challenge.