After a long weekend out of town, I knew that Monday, Day 183 was going to be a tough one to get through.

I had to run a few errands before work and saw at the CVS checkout counter a little red bottle that looked like a potion for sale by the register. "5-Hour Energy," the bottle read. I'm usually too smart to fall for these "extra" items for sale, but then I remembered a commercial I'd recently seen featuring a creepy guy walking around an office talking about what 2:30 in the afternoon feels like to his co-workers. 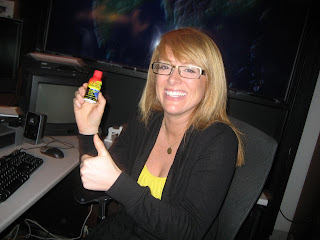 The ad compares 5-Hour Energy to all of the other caffeine options. Unlike soda and coffee, this drink supposedly gives you that extra kick without giving you the "2:30 feeling later."

I decided to ignore all of that and give 5-Hour Energy a try as Day 183's thing I've never done before, so I bought a couple and took them to work. I snapped a picture before unscrewing the top on one and then I drank it down in one gulp.

The fact that it was "lemon-lime" flavor did not help, it just made it taste lemon-limey terrible.
I decided, based on experience, not to judge 5-Hour Energy on the way it tastes. After all, Red Bull also tastes pretty bad, but it always gives me a jolt. And when I tried espresso on Day 10, I was horrified by how bad it tasted, but then completely excited about how it made me feel. Maybe, I thought, 5-Hour Energy has the same bad taste, but also the same positive effect.

I waited for the drink to kick in, but I'm sad to report that I never got the burst of energy I was looking for. Instead, I just felt sick. Not the jacked-up, hands shaking, ready to take on anything kind of sick, though. Just sick.
I considered this may have been a one-time mishap with the drink, so I tried the other bottle a couple of weeks later. I had accidentally left this bottle in my car, meaning that instead of just tasting gross, it tasted hot and gross. And once again, I never got energy I was promised.
The commercials are convincing. Weird, but convincing.
But the drink never lived up to the hype.
Posted by Stephanie Gallman at 9:00 AM