When I completely disregarded Earth Day and instead watched the NFL draft, one of the suggestions Melanie had given me for a "green" activity was to pick up trash.

On my morning run on Day 232, I did just that as the thing I've never done before. I picked up litter along the side of the road.

If the saying is true that we can tell a lot about a person by what they throw away, then we can deduct that my neighbors drink Big K, smoke Newports and have children who are not yet potty-trained. I know, because they left a trail of evidence in the form of empty soda cans, cigarette cartons, and diapers strewn about the neighborhood. 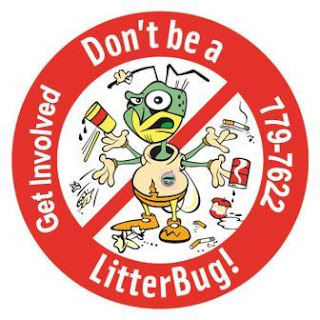 The stuff left behind ranged from the disgusting to the downright bizarre.

I always wanted to know, for example, what kind of people buy individually wrapped pickles from gas stations, but thanks to the bag with the pickle juice still in it laying on the road, I know that at least one of them lives in my neighborhood.

I always thought canned French Onion dip was best consumed indoors, at one's home, with a table to put the can on for dipping. But not where I live, apparently, because an empty can of it was among the debris I collected, along with an empty bag of Tom's Hot Fries. For a moment, I wondered if those two items, that on their own are delicious, are a good combo, and if they were enjoyed right there on the sidewalk.

I always assumed that feminine hygiene products were items that should be used in private, but not everyone feels like me since several of them were laying in the street and in the park near my house. I refused to pick them up. I just couldn't. But I'd like to do more than lecture the woman that discarded them there. I'd truly like to slap her once for littering, and then again for being nasty.

The only thing that actually made sense to me were the 40 oz. beer bottles in paper bags. Now that's trash I can support. Still, I like to drink beers as much as the next gal, but why not throw it away when you're done?

Soda cans, fast food wrappers, milk cartons, the amount of trash surprised me. And then it infuriated me.

If there is one thing that I have learned in my 29 years is that there are more than two ways to live, more than two sides to every story. I am just one person, with my own experiences and my own biases, but who am I to say that my way of doing things is any more right than someone else's?

That being said, if I could, for one moment please, climb aboard my soapbox and say, I do not understand litter. Or litterers.

I do not understand at what point in their lives these people learned that throwing their trash on the ground was the right thing to do. At the same time my parents were saying to me, "Pick that up and throw it away," where their parents saying, "Eh, just drop it, someone else will clean it up?'

I should, in telling you my deep feelings about this subject, mention to you that I'm, in general, a messy person. Ask anyone who has lived with me; anyone who knows me. I'm not particularly proud of it, but I'll leave my clothes all over the floor, I rarely make my bed, and I leave clean laundry unfolded on a chair in my living room for weeks. My entire apartment is less than 500 square feet and I've hired a cleaning lady more than once. (I think I just heard my mother sobbing in South Carolina). But with every living situation I've ever been in, I have gone to great lengths to keep my messiness to myself and not have it infect the common area. I'm not sure I always succeeded, but a conscious effort was always made.

And despite my messy ways, I can, for certain, tell you that I'm no litterer. Perhaps that's why my car sometimes looks like a dump. Because I assume let the trash collect there as opposed to on the side of some highway for someone else to clean up.

The longer I was running and picking up garbage, the angrier and more appalled I became, at the amount of trash littering the streets.

I considered for a moment that perhaps some of these items were left behind by homeless people who didn't have a trash can of their own to discard things. But that theory was quickly tabled, because as I picked items up along my run, I never had to carry them very far before finding a trash can. There were receptacles everywhere.

Therefore I beg someone to explain it to me. Why would you drink a can of soda and just drop it on the ground? Is it laziness, or do you have that little respect for other people?

I don't often get fired up, but as you can see, this experiment did the trick in inciting some emotion out of me. I hate to pass judgment on people, but I cannot hide my feelings about this one: littering is wrong.

There, I said it. Now I'll get off my soap box and go back to being carefree Stephanie, loving life and trying new things.