And after a spirited and borderline combative conversation with my mother about how my generation isn't patriotic, and doesn't understand the true meaning of the day, it was clear it was time to leave my parents' house and head back to Atlanta.

FF had invited me to the Braves game, which sounded like fun, and a completely patriotic way to honor Memorial Day. But the selling point on this game for me was that the Beach Boys were playing a free concert after the game. Question: What is more American than a baseball game and the Beach Boys?

See Mom, I told you I was patriotic!

Day 246's thing I've never done before was to see the Beach Boys at Turner Field.

When I told people my plan for Memorial Day, my news was met with several smiles and raised eyebrows, I’m sure in part because this was Day #3 with FF, and also because they were jealous that I was going to see the Beach Boys and they were not.

My brother's reaction surprised me, though. He wanted to know about FF, but that was secondary to what he was really curious about.

"The game will be fun," my brother said, "Is Stamos going to be there?"

"Since when does he play with the Beach Boys?," I asked.

Jeff looked at me like I was an idiot, and for good reason.

I assumed that the “Uncle Jesse plays with the Beach Boys” subplot on Full House was just a ratings ploy to help the already absurd scenario of three men raising three little girls in the same house in San Francisco. When in fact, John Stamos has been playing drums with the Beach Boys for 25 years.

Since I was completely unaware of this already existing relationship, when Jeff, and later my friend Elizabeth asked me about Stamos' attendance at the game, I had to confess I did not know if he would be there.

I asked FF, since he had sold the game to me with the promise of a performance by Beach Boys.

"Is John Stamos gonna be with them?"

He laughed, but like me, was not aware of the 25-year long Stamos/Beach Boys relationship. I suspect he might’ve also been somewhat alarmed that I even asked a question about John Stamos.

Though not clear on whether or not Stamos is actually a “Beach Boy,” he makes regular appearances with the band as a drummer. When he wants to drum, he shows up at the concert, and he drums. I am not sure who fills in for Stamos when he's not there, or how that backup drummer feels about playing second string to Uncle Jesse. 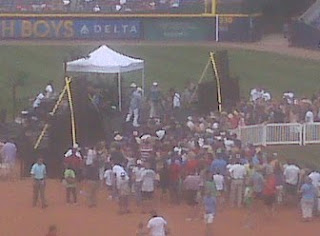 Much to our dismay (especially my brother's), the Atlanta Braves Memorial Day concert was not one of the shows John Stamos signed on to play.

But the rest of the Beach Boys proved that they all may be pushing 70-years old and singing songs that haven't been hits since the 1960s, but they’ve still got it. The classics, like "Wouldn't It Be Nice," "Kokomo," and "Little Deuce Coupe," clearly never die. There were people of all ages both on the field and in the stands dancing, clapping, and singing along. I held off on showing FF all of my moves (this was only Date #3), but I think he became aware that day that I'll pretty much dance to anything.

The day wasn't drama free, thanks to the sound system that crapped several times during the show; there was also a scare when the ballpark staff stopped serving beer in the 7th inning before the end of the game. I worried that I have to deal with the third date jitters without the help of Bud Light. But thankfully, the concession stands reopened once the concert started, or things could've gotten really awkward.

I mean, the Beach Boys are good. But they're not that good.
Posted by Stephanie Gallman at 5:44 PM