On Sunday, Day 238, I woke up fairly early considering how tired I was the night before. I guess that's what happens when I go to bed at 10pm on Saturday night.

Jeremiah, the overachiever, left to play in a tennis match and promised to return later so we could go to lunch.

Lucia and I sat on her couch and caught each other up on the last four years of our lives. Boys, family, work, nothing was off limits and in two hours I think we covered everything. At least the highlights, and the lowlights. 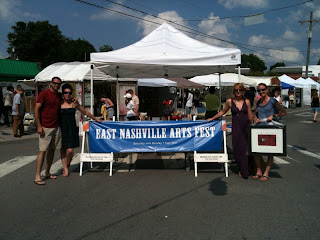 What I noticed about Lucia, and what I've noticed about others, is that she has read some of the blog, so there were times when as I was telling her something, she'd nod as if she's heard the story before. Only I knew that was impossible, because I hadn't seen Lucia in at least a year. For those who read the blog that I don't see very often, by the time I see them, my stories are old news. Those I do see regularly usually don't even bother reading the blog, because they've heard it all before.

My friend Adam has actually expressed his frustration with this fact, often unsure if things he knows about me are are because I've told him or because he's read about it.

Facebook, I've noticed, has the same affect. I've mistakenly approached people I haven't seen or talked to in a while saying things like, "Hey! Looks like your trip to the Bahamas was awesome," only to have them act weird towards me because I didn't actually know they were going to the Bahamas, I just stalked their pictures on Facebook.

After our marathon catch-up session was over and Jeremiah returned from playing tennis, the three of us, along with Amy, headed to Margot, a quaint little restaurant in East Nashville for brunch.

Nashville is, not surprisingly, like Hollywood for country music stars, and because it's so much smaller than Los Angeles, I kept looking around the area and in the restaurant for celebrities. The whole vibe made me feel like running into Nicole Kidman or Keith Urban was not the most far-fetched idea. And I really expected for it to happen to me.

It did not. But Nashville is a cool town.

I did manage, however, to sneak through a couple of firsts. Day 238's thing I've never done before was to try cucumber vodka and go to the East Nashville Arts Fest.

We got seated upstairs at Margot with a fantastic view of the bar and the front door, in case Carrie Underwood decided that she also wanted to brunch there. The waiter told us the list of specials including a Bloody Mary made with their own specially made cucumber infused vodka. 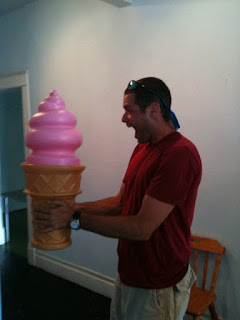 For whatever reason the smell and taste of cucumbers had not been appealing to me since the worst-decision-of-my-life juice diet the week before. Strange, since I'd always liked them, and of all the unpleasant flavors represented in the juices I had to drink, cucumbers were the least offensive. Regardless, I hadn't quite been able to stomach them since Arden's Garden liquefied and ruined them.

But, I thought, it's hot, cucumbers are refreshing, vodka is good, and Bloody Marys are my favorite. Certainly this will be fine. So several of us ordered one.

I took one sip of this Bloody Mary and nearly spit it out. I felt like I was experiencing the juice diet and a bad drinking game all at the same time. There are a lot of things vodka can be infused with, or be made to taste like, Mandarin, Lemon, Sweet Tea (thank you, South Carolina). Cucumber is not one of these things, at least not to me.

The waiter redeemed himself when I asked for a cup of coffee to replace the bad Bloody Mary and he brought me my very own personalized French press set. I'd had French press coffee before, but never from an individual set. It was delicious. and so was brunch.

After brunch, we ventured over to the East Nashville Arts festival where several local and regional artists, jewelry designers, and photographers had all come to display and sell their work. I'm a sucker for artwork, even though I don't know what I'm looking at or how high quality the pieces are. I see something I like and I'm ready to shell out the big bucks realizing only minutes before the transaction is complete that I don't own a home to put it in.

Once we had baked in the sun long enough, we went for ice cream at the Pied Piper Creamery, an ice cream shop that occupies an old home and boasts flavors like "Trailer Trash," and "Debbie Does Ice Cream." We got our ice cream to go and sat out on the front porch, making friends with a pair of cousins who just as well assumed wearing their ice cream on their faces and hands than eating it.

We went back to Lucia's house to cool off, and so I could pack my stuff to get ready to leave. Jeremiah and I played several intense Scrabble games on his iPhone and then we got into a Hoarders marathon.

The next thing I knew, it was 6pm, Nashville time. 7pm Atlanta time.

As the third episode of Hoarders started, I jumped up quickly and announced I had to go. I felt a sudden urge to get home to clean my house. Truthfully, I wanted to stay and watch six more episodes and eat popcorn on Lucia's couch, but I was facing an early wake up call and had to get on the road.

The theme of the day was, "Support the local economy," which we really did (minus Hoarders, of course).

I can't stress it enough, Nashville really is a hip town.