On Day 248 I walked over to my friend Emily's desk and saw a plethora of new toys on her desk.

"What are those?," I asked Emily, pointing at the oddly shaped figures on top of her computer.

"Silly Bandz," she replied, as if I should've already known.

"Oh, that's a Silly Band?," I asked, picking one up. It reminded me of the jelly bracelets I used to wear in elementary school, only sitting on Emily's desk, the bracelets looked like a football, a helmet, an elephant. Emily's Silly Bandz were Alabama football themed. 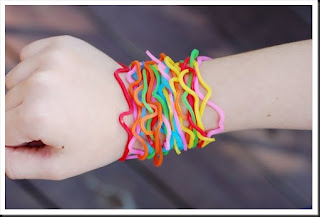 I first heard of Silly Bandz from my most favorite celebrity Kelly Ripa, who thanks to her own kids, sometimes wears and talks about them on her show.

Mo gets the credit for the bringing the plastic bracelets in animal shapes into my life, however. I'm still not sure why Mo knows so much about the most popular accessory in middle schools, but he outfitted some of our co-workers with their very own.

"Do you want one?," Emily asked me, almost childlike, proving that we're never too old to participate in trends meant for pre-teens.

"Sure," I said, happy to take part in the craze.

I wore the two Silly Bandz Emily gave me off and on for about a week. In that time, I'd often forget that they were on my wrist, but when I did glance down I couldn't help but be reminded that Mo actually paid for these colorful rubberbands.

And that's all they really are. Rubberbands.


Rubberbands that have been banned from some schools because they cause such a distraction. They are, according to Time Magazine, 2010's version of Beanie Babies and Pokemon cards.


True, they form into the shape of animals, and I suppose that is the draw for children, but why so much hysteria over a plastic arm band? I'm not trying to be a downer, and crap all over Silly Bandz, I'm just trying to express my frustration over the fact that I didn't think of this idea. My brother used to wear a rubber band on his wrist all of the time, and my friend Greg still does. Why didn't it ever occur to me when looking at either of their wrists, "Now if I made that rubber band mold into the shape of a monkey and then painted it red, I could make kids go crazy and be a millionaire."

Later that month, I also wished I'd held onto my Silly Bandz for my family's annual trip to the beach in North Carolina. Those bracelets could've earned me the street cred I so desparately needed around my cousins' kids, who spend half of the short time we are together unsure of who I am and therefore scared to talk to me. Had I come to the beach with an arm full of Silly Bandz, I may have made some progress on these relationships.

Silly bands are just as their name suggests. They're silly. They're downright ridiculous. But damn I wish I would've thought of them.
Posted by Stephanie Gallman at 9:00 AM