Day 240: The Bathroom that Cleans Itself

On Day 240, Bug (real name: Jennifer) and I went to the Botanical Gardens in Atlanta to go for a walk as the thing I've never done before, but when we got there, the ticket lady told us the gardens were closing in half an hour.

We opted to save the Botanical Gardens for another time, and instead just take a walk around Piedmont Park.

In a public park, the possibilities for something to do that I've never done before are endless, right? Something would certainly come to me. 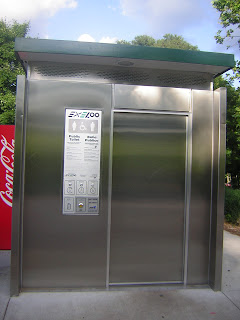 Why, 240 days into this project I'm still leaving things to chance, often forcing me to kiss dudes with moustaches and eat undesirable things, I have no idea. In my defense, I started this day with a plan. I just didn't research it ahead of time and didn't know it wasn't going to work out. So I had to scramble.

I told Bug I was going to roll down the hill log style into a group of Boot Campers as the thing I've never done before, but I didn't end up having to do that. I think it would've been so much fun, though, and have not ruled it out for the future.

But on that day, something else happened that made it so I didn't have to participate in such antics. As we started to another lap around the park, we saw a group of people gathered around a big silver box.

I stared at it for quite a while, unable to figure out what it was. I assumed whatever it was had to be new, because I couldn't remember having seen it before.

"What's that?" I finally asked Bug.

I don't know why my follow-up question to "What's that?" was "Is it free?" I'm really not a cheap person and I would've happily paid to see a self-cleaning bathroom. And from the exterior, it looked like the kind of place that would require admission.

Maybe it's coincidence, or divine intervention, but upon learning what it was, I realized I also needed to pee. 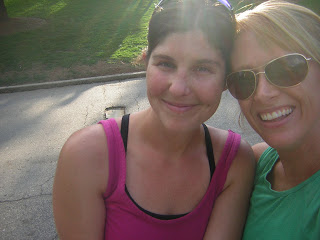 So naturally, my curiosity coupled with the call of nature made Day 240's thing I've never done before was to use the Robot Bathroom in Piedmont Park.

We walked up to the big shiny box and I got in line behind all of the other people who also needed to pee, or who were, as I was, interested in finding out what goes on inside a stainless steel, self-cleaning, over-sized porta-potty.

I watched as those ahead of me left the facility. A few people exited like it was no big deal, just another trip to the bathroom. Others laughed with their friends, impressed at the facility's simple utility and convenience (a bathroom in a park), but most impressed with that it's a self-cleaning bathroom! In a park! And it talks to you! Holy freaking cow!

When finally it was my turn, I stood in front of the door and it slid open, like magic. I entered, looking back at Bug pensively. The door closed behind me and there I was, all alone to enjoy the huge room (seriously, I could've done a full on dance routine in there) and the mystery of the self-cleaning bathroom.

As the door closed behind me, a voice from inside spoke to me, telling me I had ten minutes until the door would re-open.

First of all, the bathroom talks, which is genius. And it plays music, which made me want to stay in there forever.

But as the voice said, I only had ten minutes. I presume the creators of this device chose that amount of time as the cut off to keep drug addicts from shooting up, homeless people from sleeping seeking refuge, and couples from fornicating inside.

When I looked around, I immediately thought about how I wouldn't at all be surprised if the thing lifted me off of the ground and beamed me into space. That's how state of the art it was. 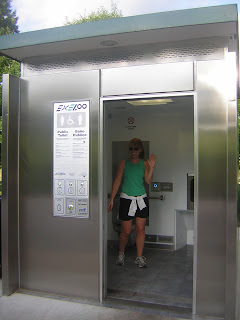 I sat down to do my business and looked to my right to find an electronic toilet paper dispenser ready to spit out tissue when I pressed to blue button. When I was done, I stood around looking for a button to flush, but couldn't find one. I wondered if it was like the airport bathroom that flushed automatically. I continued to stare at it as I went to the sink to wash my hands. When I put my hands in front of the soap dispenser, the toilet flushed. When I was done there, I continued on to the automatic hand dryers.

After standing around for a few more minutes, ready for a troll to pop out and give me a facial, I stood in front of the door and it slid open again, Star Trek style. Bug was standing there smiling proudly with a camera, and snapped a shot of me exiting.

"How was it?" she asked me, hilariously, like I was a child using the potty for the first time.

I didn't stick around to see this, but I'm told every hour or so, the bathroom shuts its doors and goes out of service for a while to clean itself. I don't know what exactly that means, or what happens during the self-cleaning. I wonder if anyone other than the person who invented it does, or if it's so secretive, they keep it to themselves. I imagine it's probably like a car wash, though when I let my imagination get the best of me, I picture fairies flying out of holes in the walls with squeegees and tiny buckets of soapy water, ready to take care of business.

Regardless, like the person whoever thought of the plastic table that goes in the center of the pizza to keep the cheese from sticking to the box, whoever came up with the Robot Bathroom is truly a genius.

There's a reason why I had to wait in line to use it that day, and it wasn't just because other people had to go.

It's because it's the most awesome public bathroom ever.
Posted by Stephanie Gallman at 9:00 AM

Email ThisBlogThis!Share to TwitterShare to FacebookShare to Pinterest
Labels: Bug