"Today's the day," I announced to my friends at work. "I've got my reservation for Spicy Chicken."

In the weeks leading up to the unveiling of its newest menu item, the Spicy Chicken sandwich, fast food restaurant Chik-fil-a began a marketing campaign encouraging customers to make a reservation to try the sandwich for free. 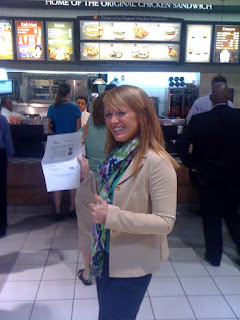 Since there is a store in the food court of my office, it seemed fitting that I would sign up for one of these free sandwiches and try one as Day 247's thing I've never done before.

"This is history in the making," Mo said, when I told him it was time.

I don't know if I would go that far. True, this was the Spicy Chicken sandwich debut, but I'm not sure anyone will write about it in history books. I don't see myself ever turning to my children and saying in my most earnest voice, "Kids, you know what today is, don't you? The 25th anniversary of Chik-fil-a's release of the Spicy Chicken Sandwich. Let's all pause for a moment of silence in remembrance of this day."

On the other hand, the day the Spicy Chicken was made available to Chik-fil-a customers is exactly the kind of useless information I always seem to remember, so maybe I will.

Regardless, with my reservation form in hand, Mo and I headed downstairs to the food court in our office to pick up my free trial sandwich.

"I'm here for the Spicy Chicken," I said triumphantly to the man behind the counter, handing him my form.

He was friendly, and he smiled when I said it. Meanwhile, Mo was behind me snapping pictures of the entire encounter behind me on his iPhone. For all this guy knew, this could've been my first ever trip to a fast food restaurant. 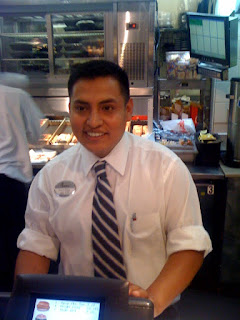 Just before he handed me my food and drink, the Chik-fil-a guy started looking a little shady, like he had to tell me a secret or something. I was not at all following what he was doing.

"For mi amigo," he said, nodding his head towards Mo as he slipped a second spicy chicken sandwich into my bag.

We're not sure if it was our friendly conversation with the guy, or the fact that Mo was wildly snapping pictures to the point that it made him appear mentally challenged and therefore deserving of a free sandwich too that made our new friend so generous, but we got out of there with two free sandwiches, a drink and a salad for $4.10.

We thanked him profusely, like he had done us an enormous favor, realizing on our way back upstairs that free Spicy Chicken sandwiches were fairly easy to come by that week, reservation or not.

When we got back to Mo's desk, we handed the camera to Justin to document our reaction.

Since everything Chik-fil-a makes (with the exception of the carrot raisin salad) is pretty much delicious, I knew that I would like it. I just didn't know how much I would like it. I did not know that they would knock a spicier version of their already kick-ass sandwich out of the fast food ball park. It's just like the regular Chik-fil-a sandwich, only it tastes like it's been dipped in wing sauce.

After discovering how much I loved the Spicy Chicken, I asked around to see what others thought about it. The reviews were mixed, which for some reason really offended me. 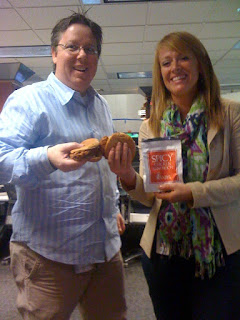 Justin shrugged his shoulders and said, "It's ok. I just think it tastes like their regular chicken sandwich covered in wing sauce."

The very reason I loved it is the same reason Justin wasn't at all impressed.

My friend Emily's boyfriend Jay works for Chick-fil-a and he said they've been working on the Spicy Chicken sandwich for ten years. At the time, I was 247 days into this year-long project and completely exhausted, I can't imagine working on the same sandwich for TEN years. I suspect Chik-fil-a takes this much time with all of their new menu items, meaning if I started working on something now, I'd be almost 40-years old before anyone in the general public ever got to try it.

Though I wouldn't want to devote all of that time into a spicier version of the original, I am so thankful that someone did. I'd say it was time well spent.
Posted by Stephanie Gallman at 1:12 PM