Day 235: The Price of Progress

Any time a house or building goes through construction, there are growing pains. My office is currently undergoing a massive renovation that when completed, will bring our facility into the 21st century. I think I speak for all of my coworkers when I say we are excited about the finished product. We're less excited, however, at sharing our workspace with a construction team that works around the clock. 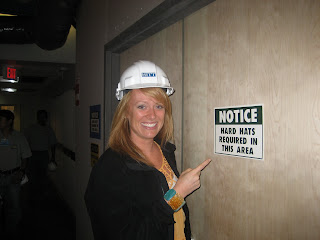 Day 235's thing I've never done before was to go to work in a construction zone; I was forced to wear winter attire in the middle of the summer, I wore a hardhat, and did business over the phone with chainsaws and drills in the background.

My co-worker Jackie comes into work before I do, and keeps me abreast of the temperature, especially when it reaches an abnormally chilly level, which it tends to do. Nobody's really sure why, in the dead of a hot Atlanta summer, our office can get so cold, that we need Snuggies and fleeces, but on Day 235, the subzero temperatures forced me to raid my friend Emily's drawer for the fleece she keeps inside.

My work environment wasn't ever "quiet" to begin with, but now we're forced to contend not just with each other, but also with the sound of drilling, sawing, and hammering on the other side of the wall the construction team erected to separate us from them. On Day 235, I realized just how bad the noise could get when I picked up the phone to call one of my clients.

Right as I was yelling, "HEAR," the drilling abruptly stopped, causing everyone to turn and look at what the shouting was about.

"Whoa," Lawrence said, on the other end of the phone, reacting to the fact that I was suddenly shouting at him.

"Sorry!" I said, embarrassed. "It's the drilling. The construction. Nevermind."

Luckily Lawrence and I are friends so I didn't have to go into too depth of an explanation. This scenario has played out with others I'm not as friendly with and it's not always as easy to explain.

To their credit, my company has done an excellent job at alerting us about days and nights when the drilling might be especially loud. They've even bought us food to compensate for our troubles.

Still, when the noise had reached headache level, I jokingly cried out, "I can't work under these conditions!" I was kidding, but I'm honestly not sure I can. By day's end, my ears were ringing and my heart racing, and I fear that Day 235 was just the beginning of a long road ahead.

Of course, there is a good possibility that part of my tenseness came from the fact that after work, I was going on another first, my first second date with FF (remember him?), which also turned out to be my first trip to Hob Nob, a restaurant specializing in high gravity beers and pub food. We had one of those second dates that I thought only happened on Match.com commercials. We closed the restaurant down, then we closed the bar down, and then we sat in my car until 5am and talked about nothing until we realized Thursday night had turned into Friday morning and we both had to be at work in a few hours.

This still isn't a dating blog, but I thought it was worth mentioning, especially since the day started with me wearing a hard hat.The price of progress, then?

For my future state of the art office space the cost seems to be predictable room temperatures, a relatively peaceful work environment, and consistent, normal phone conversations.

Getting to know an interesting guy and pretending like I'm still in high school for a night cost me $8 (the price of two beers) and a productive Friday.

Not a bad deal, I don't think. On either front.
Posted by Stephanie Gallman at 6:00 PM