Warning: This blog contains language that is inappropriate for children. Words like shit, fuck, and golf.

After several private golf lessons, sinking a putt on a PGA golf course, and even a trip to the driving range on my own, the only thing left for me to do was to actually play a full round of golf.

Eighteen holes with my dad and brother. That was Day 244's thing I've never done before. 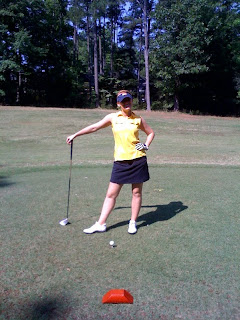 If you know me at all, you're probably thinking what my brother and dad were likely thinking: God help us.
My dad reminded me (or warned me?) all week that he'd booked one of the first tee times at the course so that I'd need to get up early and be ready to go by 7am. When my dad "reminds" me of something he does so as often and in as many ways as possible. So I was made aware of our tee time via email, phone call, and my mom, who reminded me one last time before I headed out after Caroline's performance on Friday.

I set my own alarm, so as not to miss the tee time he had made so abundantly clear, but I didn't need to, because my dad woke me up bright and early on Saturday morning. I suited up in my brand new golf outfit, we loaded our clubs into the car, and away we went, arriving with plenty of time to spare.

I knew before I even swung my club for the first time that day, that I was going to be getting a lot of instructions on my golf game from both Jeff and my dad.

What I did not know was that the instruction would not be limited to my swing, but would also include plenty about golf course etiquette. Ahead of us teeing off, for example, my dad said that he and Jeff would tee off at one box, and as soon as they were done, I needed to drive myself to the lady's tee box up ahead. They would take the other cart to get ready for their second shot.

"It keeps the game moving," my dad said.

I did as I was told, which turned out to be the only thing that I did right the first couple of holes. I was a mess pretty much from the start; if I hit the ball (which was not always guaranteed), I wasn't hitting it very far.

My dad and Jeff were both encouraging, taking turns giving me pointers so as not to overwhelm me with a barrage of suggestions. "Choke up the club," "Don't bring the club back so far," "Have your putter ready to go so you won't have to keep going back to the cart," were among some of the instructions I was given.
Despite their help, however, when I was able to connect with the ball, I still required three shots to get me into the vicinity of where their first shots were landing. I joked that since I hit them all about the same distance, I could really probably play with just three clubs: a driver, a pitching wedge, and a putter.
When I told him that playing 18 holes of golf was the thing that I'd never done before, my dad immediately removed his cell phone from his pocket and vowed to document the day's activities.
"It's for the blog," he said, enthusiastically.

I did need pictures for the blog, but when he handed me his phone to show me what he had taken thus far, I was not impressed. I was actually pretty disgusted. 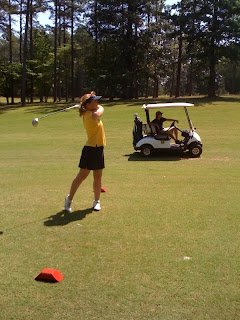 "Ugh, Dad, I hate these pictures," I said, standing outside the cart waiting for my brother to hit. "I look fat."

"What?" He rolled his eyes. "Get in the cart."
I've had a version of this conversation with my dad before. Several times, in fact. So, while I don't think he was particularly surprised that my vanity is alive and well, I also don't think he expected he'd ever have a conversation like this one on the golf course. I'll bet at that moment he wished he rode in Jeff's cart.

I decided to drop it, because clearly there was nothing he could say that would comfort me, and if I took it any further, I'd probably never be invited to play again.

As we moved on, I discovered that I was most effective with my pitching wedge. No surprise, considering that's the club that my instructor used to teach me the basics.

But put any other club in my hand, and I was unpredictable; my shots were all over the place and my frustration was building. How, after lessons, and practice (Ok, not that much practice), could I be so bad at this?

I stepped up to the ball, took my time to align my body, just right. When I felt like I was ready, I pulled back to swing feeling like this one was going to be a good one. I drove down and my club barely grazed the top of the ball, knocking it off the tee, but only moving it about ten feet.

"MOTHER FUCKER!" I yelled in front of my dad, at no one in particular.

"Sorry," I said hastily to my dad who seemed more amused by my frustration than offended by the cursing.

"You know why they call it golf, don't you?," when I got back on the cart to drive the short distance to my ball.

"No," I said, warily, and still super pissed about how terrible I was hitting. 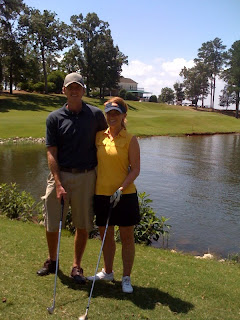 "Because shit and fuck were already taken."

I laughed. Then he laughed.

Then he stopped laughing and looked at me and said, "Don't put that in the blog."

"Ok," I lied, knowing that not only was I going to talk about it in the blog, but since I felt like swearing the moment I stepped onto the course, his joke might be the focus of the entire entry. Golf makes me say things that even my potty-mouth wouldn't normally say.

At the turn, my score was an embarrassing +28. We all took a bathroom break and my dad visited the snack bar.

"Do you kids want beers," he asked Jeff and me, removing Miller Lite cans from the cooler. I feel it necessary to point out again, for the sake of my mom, that it was dad asking us kids if we wanted beers.

Drinking beer at 9am felt a little aggressive to me, but if that's what golfers do, then I had no choice but to do it too.

I waited until we'd played a few more holes before I cracked open one of the beers, and also exchanged my sunglasses for a visor.

When it was my turn to hit again, I drilled the ball with my driver and sent the ball soaring farther than I ever had before. The shot impressed my Dad and brother; I was shocked, elated.

That shot also kicked off a string of several impressive drives, forcing me to assume that the key to my golf game might be a few sips of Miller Lite and a visor. Screw learning the basics, all I need is some alcohol and a proper sun shield!

I pulled off a handful of double-bogeys, which for me is enormous progress and something to be happy about. My short game is shit; I can,and will, ruin a great drive once I get on the green having to putt 4-5 times before getting it in the hole.

Eventually we made it to 17. The most beautiful and kindest hole in the whole wide world. Dad hit and his ball went left, into the woods next to the cart path. I can't remember where Jeff's ball ended up but I'm sure it was somewhere good.

And then it was my turn. I knew I was going to hit the ball well because no one was paying attention to what I was doing, which seemed to be the theme of the day. When all eyes are on me, I'm horrible; once everyone looks away, I'll manage to squeak out something worth talking about.

I swung my driver and felt the connection instantly. The ball soared through the air and dropped exactly where I wanted it to, making Day 244 also the first time I ever shot from the tee box to the green. 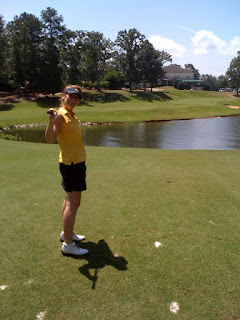 And that, my friends, is the reason why people play this demoralizing sport at all. Because the second that little ball dropped on the green and rolled towards the hole, I forgot about all of the other terrible shots I hit that day (with the exception of the "mother fucker" one). I only remember how excited I was and the look on my dad's face when he finally emerged from the woods with his own ball and he saw what I had done.

Obviously for me this day was much more than a round of golf. The quality time I got to spend with the two most important men in my life was worth all the cuss words and the ugly pictures.

I don't suspect I'll be joining the boys all the time on their golf outings, I'm pleased to report that I was able to keep up, and had enough good shots to warrant my dad telling me several times that night, "Stephanie, I think you could be really good at this game."

"Good for what?," I wondered. Comic relief?

I'm not really sure what my final score was, and to be honest, I'd rather not know. All I care about is: I kept up! I shot a double-bogey! I got on the green from the tee box! Everyone got along! No one cried!

And only two casualties were suffered: my sunglasses that fell out of the cart and were run over and a club cover that I had to return the next day to pick up.

Hell yeah.
Posted by Stephanie Gallman at 9:00 AM