Her husband Scott organized a surprise dinner for her at Rosebud, a restaurant in the Highlands.

I had a little surprise of my own, deciding to give Emily, as her birthday present, the opportunity to decide what Day 242's thing I've never done before would be. 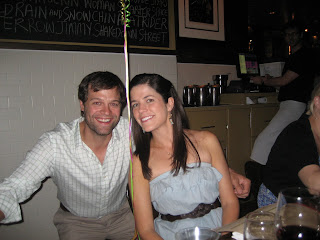 I know you're probably thinking, "That sounds like the crappiest birthday present ever." And it is. It was all I had, though, and the idea had the potential to be a win-win for both of us. Emily could completely embarrass me, and I wouldn't have to come up with anything on my own.

Besides, Emily is a Project 29 to 30 fan. When I told her my plan she actually seemed excited about the opportunity, which made me feel relieved, and less like a shitty friend.

When we took our seats for dinner, she revealed what she had come up with.

She motioned towards the trio that was providing the background music at the restaurant.

"You have a choice," she said, "You can either ask one of the band members out on a date, or you can get them to play 'Happy Birthday' and you have to sing it."

And thanks to my brother Jeff, I never make the first move when it comes to dating and boys; and thanks to a horrible singing voice, I never sing in public. Never.

Alright, with the exception of Spring Break 1999 in Key West, Florida, when my friend Lauren McKinnon taught me every word to "Let's Get it On," I never sing in public. 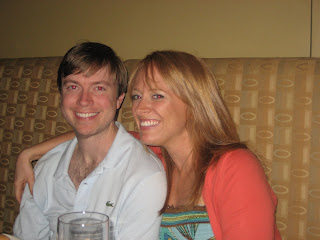 I love music, and I love to sing, I'm just so bad at it, that I keep my out-loud singing limited to my car and my shower. I really blame feeling so self-conscious about my singing voice on my dad, since he was the one who leaned over to me while I was singing a hymn at church and whispered, "Are you trying to sound that bad?"

I really wasn't trying to sound bad at all. Apparently it just comes naturally.

So what to choose when there are only two horrible options?

I glanced over at the trio, who was already hard at work playing unrecognizable background music. At least one of them was hot, the other two were not ugly, and none appeared to be wearing wedding rings. Asking one of them out seemed like the logical choice under these circumstances, though it freaked me out way worse than singing for some reason that even I can't figure out (No, I can figure it out. It's a book called The Rules, and it haunts me.)

I really do want to gather up the courage to ask someone out, but I want it to be someone that I am sincerely interested in. And I didn't know these guys at all.

She smiled wide and clapped her hands, and together we decided to ask the waiter if the idea we had in mind was something he could help us execute. We're cute and can be quite charming when we need to be, so I think we both assumed this would be a pretty easy request, and that the waiter would be on board.

But he wasn't. Not one little bit. 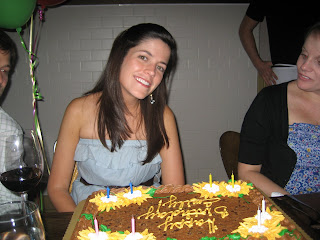 He clenched his teeth and sucked in air and leaned back from the table shaking his head slowly.

Emily turned to look at me as the waiter walked away.

"That was weird," I said to her. She agreed.

I considered his reluctance and immediately considered that maybe he thinks I've had a few too many cocktails and just want to get up there and make a mockery of the restaurant and the trio's musical talent. But I wasn't.

And Rosebud is a nice restaurant, but it's far from stuffy. The slogan on the place's website says, "We like comfortable food, loud music and a good drink." I hardly think they're against people having a little fun on the microphone, good singer or not.

The more Emily and I discussed the reasons why they might be against my joining them for one song, the more annoying I found this trio. I mean, the place hosts "Grateful Dead," nights once a month. The fact that this trio, "wasn't sure," if I could come sing with them was annoying. Who did they think they are?

"Pssst . . .hey nameless trio playing in a restaurant on a Thursday night," I felt like saying, "Don't take yourself so seriously!"

Moreover, by that time our table of 15+ was quickly becoming the only group in the place, so the majority of people who could've been bothered by my singing Emily "Happy Birthday," would be my friends. And they already know I'm a terrible singer.

We ordered our food and enjoyed our meal and in between asking for drinks, Emily and I kept checking in with the waiter to see if he'd had any luck with convincing the band to let me join them.

Most of the time he shrugged his shoulders and said he wasn't sure; I wasn't convinced that he'd actually ever asked them. Towards the end of the meal, he returned to the table and said almost in a conciliatory voice said, "Ok . . .they're going to be winding down soon, so if you want to do it, you're going to need to go now."

Based on his reluctance to let me sing in the first place, I didn't waste any time in jumping up from the table and heading over there. I didn't want them to start packing up before I had my chance, or worse, change their minds completely.

I tried to casually walk over instead of breaking into a full on sprint to get there. I wanted to appear cool, not overeager, and definitely not nervous, which is exactly how I felt. Luckily the whole thing went down so quickly that I didn't have too much time and before I could even summon the birthday girl and everyone else to come watch, the trio started playing "Happy Birthday," and everyone missed the beginning.

They all made up for it by running to the front to cheer me on, and to shoot video, and as you will hear, singing along with me. Thanks, Trish.

Regardless, I thanked each of them profusely for allowing me to sing "Happy Birthday" to Emily. Not one of them would look me in the eye. They may have agreed to play along, they may have agreed to let me sing into the free microphone next to them, but they clearly weren't amused by this idea. At. All.

Maybe they'd never heard such a bad voice? Or maybe they feel as though their artistic integrity had been compromised by participating in such "sorority-girl" behavior?

Don't they know that either way, regardless of what I did, I could only make them look better?

Happy Birthday, Emily! Sorry your present was so crappy.
Posted by Stephanie Gallman at 9:00 AM