I considered calling this entry, "Sunday Funday," but that would imply that I haven't had a Sunday Funday before and that would be a lie. Sunday Fundays are my favorite, and Day 231 was of the unexpected variety.

The day started at Treehouse, where I met some of my closest girlfriends for brunch. Despite living in the same city as them, I'm ashamed at how rarely we all get together, and how much advanced notice was required to make this brunch happen, especially considering that when we met, our single most important priority was hanging out. I know that adding jobs, boyfriends, husbands and (soon) children to the mix will only continue adding to the challenge, and though it's certainly not worth fretting over, I marvel at how my friendships with these women continues to evolve.
Regardless of the notice required, I was happy 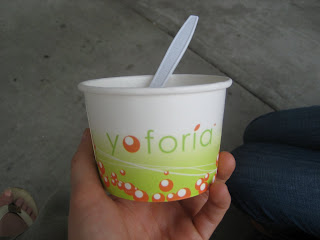 that we were able to nail down a time that worked for all of us. I knew this was going to be a good afternoon when I showed up and was the first one there. I could tell my friends, especially Trish, were impressed, as this never happens. Never.

"Let's all get together and have brunch," quickly turned into, "Let's eat some food (raw for Steph), drink mimosas (pretty sure not raw, but really who cares at this point?), and talk about what's been happening in our lives over the last couple of months. And if it takes us almost five hours and two venues to do it, we're going to catch up if it kills us."

Four a half hours later, we succeeded at our plans to catch up. When the epic brunch started to wind down, we looked at our watches, realized how long we'd been there and some determined it was time to go.
I'm not sure if it makes sense or was just a coincidence that the only two left with nowhere to go were the two unmarried girls of the group, but so it was, Maribeth and I were left with nothing but each other.

The pedicure that I got was at first seemingly no different from any other that I'd ever had. I chose this particular nail salon, Buckhead Nail and Toe, because during the pedicure, a woman will come over to massage your shoulders while you're sitting in the spa chair. Of the many simple pleasures in life, this is one of my favorites.

At one point during the massage, she asked if I wanted her to continue.

What kind of a question is that?

Is "forever" an appropriate response?

When the pedicure was over and I went to pay, I made the shocking discovery that these nail ladies are running the nail salon's version of a telephone hotline! First five minutes, free, with purchase; one dollar for each additional minute, meaning I owed them, in addition to the pedicure, $10 extra dollars.

My neighbor growing up learned about these scams the hard way when he spent an entire day calling the Alyssa Milano hotline for a chance to speak with her, only to rack up $23 on his parents' phone bill, a cost that at the time completely devestated him, as it wiped out his entire life's savings.

I, like Michael's parents, had to suck it up and pay for the services rendered, but I wasn't happy about it. And for the record, I'm not sure who told the masseuse her services were worth $1 per minute, but I think that's a gross exaggeration.

I tell you all of these other stories for no other reason than I wanted to and it's my blog so I can. But they all bring me to Day 231's thing that I've never done before and that was to try a new kind of frozen yogurt on the scene in Atlanta, Yoforia. 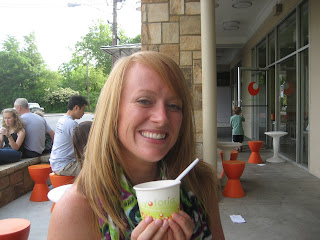 Seriously, could this Sunday get any girlier? Brunch, mimosas, idle gossip, pedicures . . . and now, frozen yogurt.

Only this isn't your run-of-the mill TCBY frozen yogurt. Yoforia is different, better, it will make you skinny and give you wings to fly. According to Yoforia, anyway.

Maribeth described it as less sweet than regular frozen yogurt.

"It's more tart," she said. "Like plain yogurt from the grocery store, only frozen. Like Greek yogurt!" ll of this explanation, I think she was trying to describe the taste to herself, not just to me.

When I walked into Yoforia, I was reminded of my first trip to the Apple store so many months ago. The super modern, almost futuristic decor gave off an heir of superiority much like Apple does, so you think you're at some super hip nightclub that only the cool kids know about. Only it's not a nightclub, it's frozen yogurt, and you're with your only other single friend while all of your other friends are at home with their boyfriends and husbands doing "Sunday" things.

I fully suspect that also like Apple, Yoforia likely thinks they are a lot cooler than they actually are. It's probably just a matter of time before they're handing out numbers and taking reservations for people to eat there.

Another reason for me to hate Yoforia: because everyone else loves it and can't stop talking about it. I mean, this is me we're talking about. The one who still has a Dell computer and a flip phone.

So we walked in, I'm faking excitement for the sake of Maribeth's feelings, but I'm fully prepared to be annoyed that like the Twilight series, this yogurt couldn't possibly live up to the hype.

I wanted to hate it, but I could not.

That's because Yoforia is as delicious as advertised. I didn't hate it at all. In fact, I loved it. I love it. At the risk of giving you Maribeth's confusing and vague description, it's really light, refreshing, and has a mere 25 calories per serving.

And I hate to admit it, I'm convinced that it actually could make us fly. Or maybe that was just the mimosas.

Posted by Stephanie Gallman at 11:00 AM