On Day 249, Emily and I hosted a martini party, something she'd been suggesting we do as a fun activity for the blog.

"Perfect," I thought, because while being a vodka martini drinker for several years now, I had never actually made the cocktail myself.

When Sex and the City 2 hit the theaters, this party we'd only just talked about started to make sense, and began to take shape. What if we had martinis and appetizers ahead of going to see the movie? How completely unoriginal and girly! 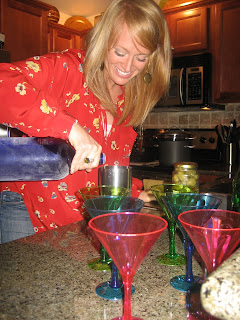 Let it be known that I make no apologies for liking this show, and the films, as much as every other woman. Interesting characters, superb writing, fabulous shoes . . .what's not to like? Hosting a party in honor of a movie, though, was completely out of character for Emily and me.

But what the hell? Who cares? I needed to learn how to mix a martini, I needed away to get people over to Emily's to taste it and I did want to see the film, so Day 249's thing I've never done before was to make blue cheese stuffed olives and mix a dirty martini.

And host a Sex and the City 2 party. Barf.

I prepared the blue cheese stuffed olives before going over to Emily's the night of the party.

They're not hard to make, they're simply time consuming. The challenge for me was figuring out how to get the cheese in the little hole inside the olive without kitchen tools like piping bags and toothpicks.

Before that, though, I had to get the pimentos out. I searched wildly for a tool that would've done the trick, but came up short. I wondered, after briefly considering grabbing my bathroom set to get this job done, if there is such a thing as kitchen tweezers for scenarios like this. If not, perhaps I will invent them and become rich and famous.

I washed my hands thoroughly and used my fingers and a fork to remove the pimentos. Then I filled a plastic sandwich bag (the single girl's piping bag) with the blue cheese mixture (blue cheese, garlic and black pepper), snipped the end off of it and squeezed the mixture into the now-vacant hole in each of the olives.

The process wasn't pretty, and my method, along with the mess, served as further proof that I will never have my own cooking show, but the finished product was delicious. I repacked the pimento-free, blue cheese stuffed olives into the olive juice, as the recipe told me to, packed my other hors d’ourves and raced over to Emily's house.

"I got all dressed up for my partay," Emily said when she opened the door to her place wearing a fancy new shirt.

We began racing around to set up the food and drinks, forgetting for a moment that our friends are usually late and likely wouldn't arrive on time. Our window for food and drinks was short, though, since we were headed to the movie at 9pm, so we wanted everything ready by the time guests began to arrive.

As we started filling platters with the food we'd prepared, I had to laugh.

"Where were we going with this menu?," I asked Emily, as I looked at the spread that included baked brie, guacamole, wontons and frosted cookies with the characters from Sex and the City's names painted on them.

Scott, Emily's husband, agreed. The theme we were apparently going for was, “Emily and Stephanie’s favorite finger foods.”

He motioned towards the brie.

"Did you guys make that because of Bree in the movie?," he asked, smiling, proud that he had drawn this conclusion. 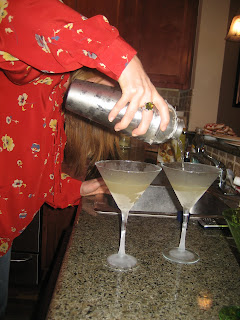 Emily and I stared at him, and then we looked at each other. Then Emily looked back at Scott.

"Are you talking about Brie from Desperate Housewives?," Emily asked.

And then he grabbed a wonton and left the condo immediately for Donald’s, where he would stay, banished from his own place for the rest of the girls' night.

After Scott left, it was time to mix my first martini.

And then Lisa called.

“Where are you?” I said, “I made blue cheese stuffed olives.”

"Well why don't you stuff one with a ruffie and I'll be right there.”

"What? Nice, Lisa. That just made the blog."

She hung up, and arrived a few minutes later.

While we waited for her to get there, I went back to mixing my very first martini. Though I wasn't thinking this at the time, I'm extremely grateful that learning how to make a martini was on my list of things to do that I'd never done before. I just feel like that's something every 30-year old should know how to do.

Emily gave me instructions, and said a martini isn't scientific. It's just vodka, a couple of splashes of vermouth, and as much olive juice as I wanted in the cocktail shaker with ice. That's it.

Then shake, (but not too much so that it spills all over Emily's countertops as I learned the hard way) pour, and serve.

After a couple of tries, I discovered the key to a good martini is to make it super cold, and super salty with the olive juice.

Our guests agreed. Those who tried the dirty martini seemed to like it. Well, more like they didn't hate it; I'm going to take that as a success. No one seemed completely turned off my the drinks and the olives were a hit.

We spent a lot of time out on Emily and Scott's back porch that night, discussing everything and nothing. Lisa was surprised to find out, despite me already telling her, that I'd made the olives myself.

I reminded her about our conversation earlier about the ruffie, and I told her I'd already planned to write about it in the blog. Then she said she hated when I write about her, because I misrepresent her.

"No," she said, "You just always make me sound stupid."

Maribeth chimed in and agreed with Lisa that I've painted her in an unflattering way. 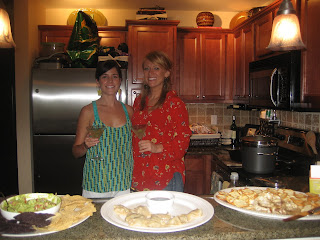 Though this conversation was light-hearted (I think), I made it clear that the only person I aim to disbarage in this blog is myself. And I truly mean that. My friends are the characters in my life and they're way more interesting than any characters I could've created, but in no way did I ever mean to put them out there in ways that are unfavorable.

But seeing as how I'm several months behind in writing, I must admit that, "My blog is the truth, as I remember it," so I might not get everything exactly right. I'm getting up there in years, after all.

I told both of them this and then encouraged Maribeth and Lisa to start their own blogs to set the record straight.

At 8:30pm, we needed to make a move to the theater for the movie, but no one could really get the motivation to get out the door. The martinis were simply too tasty, and the conversation (read: gossip) was just too good, so after a great deal of dicussion, we opted to skip the movie and enjoy each other's company (and my martinis) instead.

The change of plans kind of screwed Kyle who had already bought her ticket to the movie, but the decision was the right one, and Kyle met us at Emily's.

So the Sex and the City 2 party turned out to be the martini party that we'd intended it to be all along.

So fun, so girly, and so fabulous. Just like us.

Ok, enough with the cliches. Can someone bring me a beer?
Posted by Stephanie Gallman at 2:00 AM