Weeks before going to Panama and embarking on the juice fast, I'd planned what I was going to do on Day 230.

Actually, it was my friend Tray, a Louisiana native, who decided that for Day 230's thing I've never done before, I was going to learn how to boil crawfish. And he was going to teach me.
Of all the activities to welcome me back into the world of e 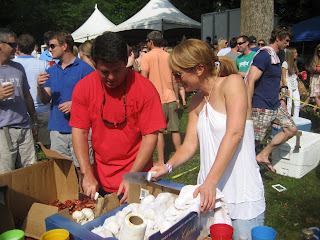 ating solid foods after a 72-hour hiatus, I'm not sure this was the best one. Not because I don't love crawfish, but because presuming I was successful in learning how to cook them, I wasn't going to be able to eat them since I was still only permitted to eat things that were raw. I wasn't even supposed to enjoy the second best thing at a crawfish boil, ice cold beer.

Damn you, Arden. And your stupid garden.

Like it or not, this was the day of Tray's annual charity crawfish boil, so I had no choice but to make this the day that I learned how to cook the little critters. My friend Emily came along with me to the event, for the second year in a row. Last year's crawfish boil turned into an all day affair that ended in a parking lot in the pouring down rain and may or may not have involved splashing strangers in puddles and a dance off. Though we weren't sure we were ready for that kind of fun this year, there is no doubt that Tray and his friends know how to throw a good party.
We arrived at the event, which is in a big yard behind a house in an Atlanta neighborhood called Virginia-Highlands. After a stop at the beer truck (That's right, I drank a beer. I may have had two. This was me giving the middle finger to fasting and to Arden's Garden), Emily and I started walking to a sectioned off area at the right side of the yard where Tray had set up to boil the crawfish. We could see several pots already in progress, but Tray was nowhere to be found. Not surprising, since he is one of the hosts of the event, and has quite a few responsibilities. I imagine it's a labor of love for him. He works his tail off the weeks leading up to the boil and on the day of, but he does so surrounded by all of his friends from Louisiana who come into town to support the cause. I think he manages to have a little bit of fun while working so hard.

But because he was running the show, he was sometimes difficult to track down.

Once we arrived at the cooking area, Emily and I both ran into several people that we knew, but we still didn't see Tray. I knew I needed to be near the pots of crawfish, but wasn't ready to cross the makeshift barrier into an area where I knew no one. Instead, we opted to stand outside the barrier looking longingly, and awkwardly toward the pots, like we were trying to get into a party we weren't invited to.

Finally I spotted Tray and said, "I'm ready to get my crawfish on!" 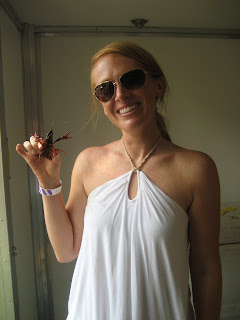 He shook his head laughing and said, "Where've you been? I've been cooking for three hours."
Emily and I received permission to cross over into the sacred crawfish boiling area.
"Alright," I said, "Let's get started."
Tray handed me a lighter and told me to light a flame on the gas burner beneath the pot.
"Sure," I said, confident this task would be easy. Only it wasn't. I don't know if I was scared I was going to burn my hand off or if my clothes weren't permitting me to get low enough to see what I was doing, but regardless, I couldn't make it happen; couldn't get the flame lit.

He didn't say so, but I'll bet Tray was thinking it was going to be a long day of teaching if I can't even light the burner.

Once he got it lit, Tray instructed me to cut lemons, potatoes, and garlic bulbs in half, and then throw them all in the boiling water for ten minutes.

"How many of each do I need to cut?" I asked, my need for a recipe rearing its ugly head.

"I don't know," he said, as he walked over to another pot already in progress. He lifted the lid and said, "This many."

I shrugged my shoulders and said, "Ok."
I hope you're not reading this entry in hopes that I can give you a legit recipe for a crawfish boil. There was no recipe, there was only Tray eyeballing my work and saying, "Yep. That looks about right."

He showed us where all of the ingredients were and handed us knives so Emily and I could start chopping, a task that seemed easy enough, except that the only table reserved for the preparation of this meal had just a square foot of open space, and we were fighting each other for it.

Not to mention, once everything was cut, getting it all into the pot of boiling water meant putting myself and those around me at potential and serious risk of 3rd degree burns. 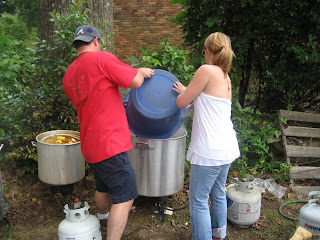 I'm not sure if it was safer, but Emily and I turned our crawfish cooking into a basketball game, standing way back and hurling the lemons, potatoes, and garlic into the pot.
Tray had, at that time, disappeared again, leaving Emily and me by ourselves in this sectioned off area that consisted solely of Tray's friends, none of whom we knew. You can imagine, then, I'm sure, the understandably strange looks we received from some of them wondering what two random girls were doing in their VIP section chopping lemons and potatoes. Most of them stared at us, wondering who we were and why they'd never seen us before, and, likely, what we were doing there.
Others had the guts to ask, "Who are you?" or "Do I know you?," which inevitably led to me telling them that I was friends with Tray, and about the blog.
As usual, I said, "blog," they heard, "geek," and quickly walked away. Others were intrigued and wanted to hear more. One in particular was extremely concerned with us getting the full crawfish experience, especially if I was writing about it.
"Wanna see where we're keeping all of the crawfish?," he asked us.

I thought that might've been a pickup line or a euphemism for something else. It was not.
"No, seriously," he said, "They're over there in that truck." He led Emily and me up a small hill, opened the door to the truck and we climbed in to find several white coolers, all filled with live crawfish.
I was amazed by them, crawling all over each other, likely unaware of what was about to happen. I picked one up, feeling mildly sorry for the little thing that would soon meet its death in a pot full of boiled water that I'd prepared. We thanked our new friend for giving us the behind the scenes tour of crawfish, and returned from our short field trip to find Tray waiting at the boiling pots.
"Has it been ten minutes?" he said to me.
"Ten minutes?," I asked.
"Yeah," he went on, "Has it been ten minutes since you put the potatoes in?"
"Uh . . .uh . . .," I stammered, "I don't know . . .I don't have a watch . . .I just picked up a crawfish . . .with your friend!"
Tray shook his head at me again, still smiling, realizing that I'm not as quick of a learner as he'd hoped, and that I needed constant supervision on this project. I realized that Tray wasn't just teaching me for the fun of it, he was counting on this batch of crawfish to be edible. I couldn't slack off any longer.
Once the potatoes (and the garlic and lemons) had cooked for 10 minutes, it was time for more ingredients--corn, sausage, and seasoning.
A lifetime Lowcountry boil fan, I looked over to where Tray was motioning towards seasoning and said, "Oh, like Old Bay?"

He glared at me like I'd killed his dog right in front of him.

Then he held up a yellow bag of what I can only assume is the real deal, legit crawfish boil seasoning that obviously is 1000 times better than Old Bay.

"Well excuse the hell out of me," I said.
The final ingredient to go into the pot was the most important--the crawfish.
Now, I was there to help and do as much as I possibly could to aide in the crawfish boiling, but when it came to dumping the crawfish, the best assistance I could provide was to get the hell out of the way. That's because the pounds and pounds of crawfish are stored in long, white coolers and require those with a lot more physical strength than me to lift them high enough to dump into the boiling pot. 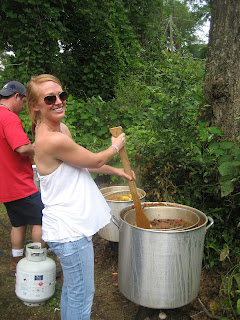 Tray and his friends took care of that as gracefully as they could, losing only a few runaway crawfish that creeped into the woods behind the pots.
Once all of the ingredients were cooking, it was time for me to stir them with a brown paddle that reminded me of the paddle Ben Affleck's character uses to beat up freshmen in Dazed and Confused.
So far I'd managed to show up late, not light the burner, forget to keep time, and offend Louisiana spices, but I thought for sure that I couldn't screw up stirring the pot. I was wrong. Tray informed me that stirring a crawfish pot is less round and round, more up and down motions. When I was doing it right, I was almost pushing the food into the seasoned water and letting it come back to the surface.

"Bring me the corn," I said to her, while I was still stirring the pot.

"Oh, so now you have a sous chef?" Tray joked.
I don't know about that, but thanks to Tray's instruction and our teamwork, Emily and I managed to boil two batches of delicious crawfish for charity go-ers consumption.
We didn't eat any, because Emily hates crawfish and I couldn't eat anything cooked, but Tray gave me two thumbs up on a job well done and to my knowledge, there were no reports of food poisoning.
Anyone that got sick at the crawfish boil did so because of too many trips to the beer truck, not because of me.
Posted by Stephanie Gallman at 11:34 AM