Back from vacation, still nursing my sunburn (which had taken an interesting and even more disgusting turn that had caused my feet and ankles to swell), my body was in need of some TLC.

The timing felt right to try a cleanse or a detox program of some sort, something that I’d wanted to try since I started the blog. 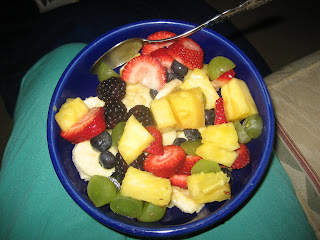 My friend Katy was interested too, having had several friends complete various cleanses of their own. We both did research and were both overwhelmed at the varieties that exist, ranging from day-long cleanses to month-long ones. Some are so intense, taking off work is recommended because the lack of nutrients makes you so weak. Others require drink mixes and supplements costing hundreds of dollars. I knew I couldn't spend that much money, and I knew I couldn't commit to much more than a week or a few days, so I opted to do the Arden's Garden 3-day Love Your Liver Cleanse.

What is humorous to me now (and trust me, there wasn't much that was humorous about this experience. At all.), is that Arden's Garden offers another detox cleanse that is two days long. But I chose the three day cleanse for some unknown, terribly stupid reason. I've attacked a lot of challenges this way. When I learned to knit, I wanted to knit an entire sweater that day. When I learned to rock climb, I expected to make it to the top of the mountain instantly. When I fast, I want to fast as long as I possibly can. I mean, why suffer for two days when you can suffer longer?

Ahead of the cleanse, which started on Day 227, I had to prepare, so Day 226's thing I've never done before was to eat raw for an entire day and purchase the juices needed for the cleanse.

Before going to Arden's Garden I did enough research to share with Katy exactly what was expected to see if this cleanse was one she also wanted to do. She instantly said yes, and then I told her what it would entail.

Monday and Tuesday we'd need to prep for the juice diet by phasing out cooked food and replacing it with raw. Wednesday, Thursday, and Friday we'd consume nothing but the juices they provide, and then Saturday and Sunday go back to eating raw.

"So it's three days?," she asked me over email.

"Well, the cleansing is three, but the eating raw is supposed to happen two days before and two days after," I explained.

She went on to tell me that she was headed to New York that weekend for her brother's graduation, a weekend to be filled with big family dinners in nice fancy restaurants.

"There's just no way," she said, apologizing for leaving me on my own to complete this task.

"No worries," I said. I can't say I blame her. I know she's not a quitter, she's just realistic. 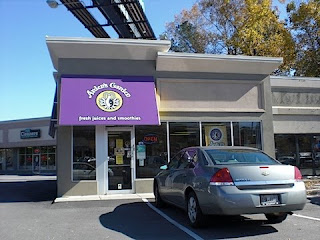 Regardless, I was on my own.

Eating raw was easy. With the exception of beets and sweet potatoes, I love all fruits and vegetables, so eating them exclusively for a couple of days was different, but hardly a challenge at all. I started a modified raw diet on Day 225, but sneaked in a piece of frozen pizza, mainly because I didn't want it to go to waste, but also because I wasn't quite ready to embrace the raw experience just yet.

Day 226 was strictly raw, however. I made a big fruit salad in the morning, and ate salads for lunch and dinner. There were no limitations on what vegetables and fruits I could eat, so I ate quite a bit of produce ranging from spinach, avocado, tomatoes, strawberries, bananas, and mangoes. The food was delicious, and I felt quite satisfied.

When I went into Arden's Garden on Day 226, I spoke to the bearded guy behind the counter and told him I was interested in the Love your Liver 3-day cleanse.

"My liver needs some lovin'," I said, laughing, certain that he would think I was both hilarious and charming.
He didn't crack a smile.
He wasn't unkind, though, and was extremely knowledgeable about "juicing," as he called it and eating raw. He said that the body digests cooked food differently than raw food, so eating "raw" helps the body prepare for the juice fast. Juicing, he explained, was sort of like hitting a "reset" button on our bodies, apologizing to them for all of the harmful things we've done.

Alright, maybe I indulged a tad over the last couple of weeks, but I don't know if I'd call fish tacos and grilled chicken harmful, necessarily. That sounds a little dramatic. Now the rum punches and the Coors Lights, that's a different story.

I told him that I had already started the raw part of the diet and thought it was going pretty well so far. I was feeling rather proud of myself until he nodded and said he only eats raw foods.

All the time. Nothing cooked. Ever.

"Ahhh, that must be the reason for the frown," I thought to myself. I'd be a stone cold bitch if I never ate cooked food.

This revelation about bearded Arden's Garden dude was insanely interesting to me, so I instantly abandoned my own questions about the juice cleanse and went on to ask him at least 10 questions about how he lives a normal life while only eating raw foods.

I could've substituted all of the specific questions for just one that probably would've covered what I really wanted to know and that's, "Why?" 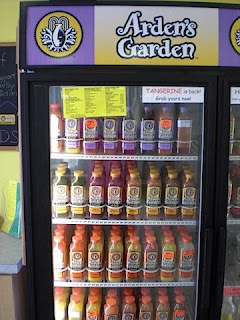 Why? Why? Why would you only eat food that is raw?

Midway through our conversation, which was making me both tense and excited all at the same time, a woman came into the store and asked for a shot of wheat grass.

As if my conversation with the Arden's Garden guy hadn't already led me to this conclusion, hearing her request made me certain that I had come to the wrong place.

I am an A kind of person. They are B types of people.

Not necessarily by type, but they were friendly, and seemed to know what they were talking about, so I listened to what they had to say, knowing full well that the cleanse would be good for me, but wouldn't likely change my eating habits permanently all that much.

The next thing he said turned out be one of the most interesting points I would consider over the next few days throughout the cleanse. Because the point he was making turned out to be spot on.

Hmmm. . .eating only when my body is hungry? Now that's a new concept.

I, like a lot of people, eat when I'm bored, or because I want to taste food, or because it's noon and everyone else is going for lunch. Eating is a social activity and one that I happen to find very enjoyable. I love big meals with lots of people and lots of food that go on for hours and hours.

The juice cleanse would take all of the joy out of eating. And living. I didn't know this then, of course. I was still excited and delusional enough to think completing this experiment would cause me to drop 20 pounds and give me beautiful skin and hair.

Time to detoxify and start loving on my liver.
Posted by Stephanie Gallman at 9:00 AM