**Editor's Note: The picture associated with this blog is misleading and does not reflect the author's views on the subject matter. The author is simply vain and was taught at a young age to always smile for the camera.***

Day 227's thing I'd never done before (and vowed never to do again) was to get this detox underway and begin the Arden's Garden 3-day Love Your Liver juice fast.

I woke up excited and optimistic about trying the juices, about all of the bearded Arden's Garden guy's promises for renewed energy, about releasing all of the toxins from my body and feeling lighter on my feet. This optimism, and desire to succeed, allowed me to overlook a lot of things that a normal person would, like the fact that I wasn't allowed to consume solids for 72 hours and that most of what I'd be drinking smelled like grass.

The words, "Oh hell no, I'm not drinking that!" never even came out of my mouth, even after reading the ingredients, which should demonstrated how dedicated I was to the process.

The worksheet that homeboy at Arden's Garden gave me spelled out exactly what juices I needed to drink and when. 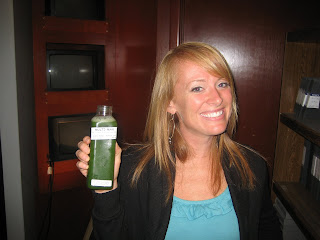 I downed the water no problem when I woke up. Lemon water, check!

I'm one of those people who eats immediately upon waking up so while I wasn't sure if this was following proper protocol, after drinking the distilled water, I measured and drank the Multi Green and Carrot juices.

I drank the Multi Green first, because it was green and I just had a feeling it was going to be the more painful of the two. I was right. Multi Green contained Cucumber, Celery, Spinach, and Parsley, things that separately, and tossed in a salad in solid form, I love. Liquefied and mixed together, however, they were every bit as tasty as you might imagine. Still, I thought, it was just 8 ounces. I can do this.

The Carrot juice was a bit of a reward for taking the Multi Green like a champ. Carrot juice is sweet and though I found this juice's consistency and color a bit off-putting, I drank it with no problem.

The Multi Max was the mid-morning snack, and while it was also green in color, I found it easier to take than the Multi Green, presumably because the main ingredient was distilled water. The other ingredients listed on the bottle: Cucumbers, Celery, Lemon, Spinach, Parsley. The cucumber taste was most prevalent and I found it sad, and a little unappetizing, that I had rubbed cucumbers all over my sunburn just a week prior, and now I was drinking them.

Lunch became my most favorite, most coveted meal of the day over the next three days. Apple juice. Simple, delicious, exactly as advertised, Apple Juice. A whole 16 ounces of it. I think you're by now on to the fact that I don't have a lot of nice things to say about Arden's Garden because of this experience, but their Apple Juice, and other fruit juices, are pretty damn good.

Because of my funky work schedule, I drank lunch around 3pm, and then had my Mid-Afternoon snack, a second round of Multi Green, at 7pm or 8pm. This round was a little bit more difficult, because instead of just 8 ounces, I had to drink 16. It went down slowly. Like a newborn still figuring out how to eat, I was drinking every few hours, but taking a least an hour to finish anything. I felt that by the time I finished one the drink, it was almost time to drink another.

So I suppose in a way, the bearded Arden's Garden guy was on to something, at least as it pertained to my hunger, because after drinking the last Multi Green, I was full. Or perhaps I was so disgusted by its taste, that I didn't want to drink anymore. Regardless, neither my mind, nor my body, were hungry.

The final "meal" of the day was called Salad in a Glass, which sounded completely terrible, but looked so pretty, I wanted to believe that it could taste good. Bright red and frothy, like a smoothie. With the exception of the Apple Juice, I'd been fooled all day by Arden's Garden, though, so I knew better and checked the ingredients: Beet, Parsley, Carrot, Celery, Cucumber, Spinach.

I took one sip and dry heaved. The smell, the taste were both beyond foul. I tried, I truly did, to finish it, but I was full, and completely grossed out. I'll make room for pie or cookies or ice cream when I'm full. But this drink? No thanks. Not hungry at all. So, after a few painful sips, I quit.

I left work feeling bit like a spoiled brat who wouldn't eat her vegetables. I also felt like Arden was kicking my ass.

I was defeated, tired, disgusted. With myself and these juices.

I went to bed depressed, wondering how I was going to be able to do this for 48 more hours.
Posted by Stephanie Gallman at 10:12 PM