On Day 220, after an action-packed nine days in Panama, Maribeth and I got up early and boarded a plane back to Atlanta. I was sad to come home and sad that vacation was winding down, but knew my body couldn't take much more. In fact, I felt a little beat down, like I was going to need a vacation from my vacation. 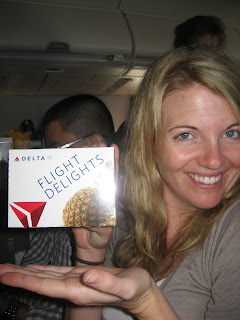 I was looking forward to kicking back on the plane with some refreshments courtesy of Delta and continuing the extended nap I'd started the day before. But as we had already learned on our way to Panama, Delta no longer offers any sort of refreshments other than pretzels, peanuts, or cookies, and a drink on flights. Even international trips.

Maribeth and I had to leave our hotel at 5am to catch our flight, leaving no time to stop for breakfast. So once we'd been in the air for a little while, we were both starving.

Day 220's thing Maribeth and I had never done before was to purchase, and consume, a Delta Flight Delights box.

The cost of the entire package was only $5, but I still get mad thinking about us having to buy food on an international flight. It's not about the money, it's the principal of the matter. I spent all this money to fly to Panama (actually I didn't because I used frequent flier miles, but still) and I had to pay $25 to check my luggage, and this airline can't scrounge together some crappy airline TV meal to serve us? Ridiculous.

The box that we purchased came just as advertised:

We laid out all of the box's contents onto Maribeth's tray table, and looked at our delicious bounty opting, like children, to eat one item at a time.

Luckily, Maribeth and I saw eye to eye on the fact that we should eat what we anticipated would be our least favorite items first and gradually 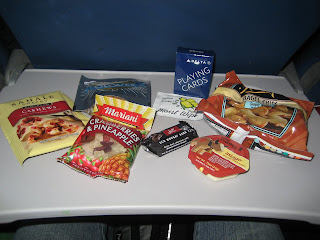 work up to the best ones. She and I also agreed that we should take pictures of the entire Delta Flight Delights experience, guaranteeing to annoy and freak out everyone sitting in close proximity.
We ate the dried fruit first. I love dried cranberries, but other dried fruits weird me out, so I wasn't a huge fan of the pineapple. After we polished off that bag, we moved onto the pomegranate-vanilla glazed cashews, which were delicious. The combination of those flavors was unexpected and strange, but quite tasty.
My favorite item was the olives, which were called "Oloves" and were served in a bag with a light vinaigrette dressing. They tasted good, but I think I liked the fact that they were served in the bag as much as everything else.
We saved the Asiago cheese dip and bagel chips for the end because we knew they'd be awesome. I mean, come on, it's cheese dip.
Maribeth and I enjoyed the Swiss chocolate while watching Leap Year, a romantic comedy that ranks up there with Felicity as far as being completely unrealistic and lacking intellectual stimulation. I cried at the end, though, proving that I'm a huge loser and a hopeless romantic.

All in all, the Delta Flight Delights box was, as its name might suggest, delightful. I'm still not happy about being forced to purchase my own food on an international flight, but for $5, we made it to Atlanta in one piece and not completely starving.
And then we went out for pizza.
Posted by Stephanie Gallman at 9:02 AM