Besides a few good rides on some Panamanian waves and a new vacation friend, my marathon surfing lesson with Chapo on Day 217 also earned me severe sunburn on my backside.

I've glossed over it in the last few blog entries, just because I didn’t want to talk about it while still trying to enjoy the last few days of vacation, but I feel like I'd be lying if I didn't tell you that it was one of the worst sunburns I've ever had. 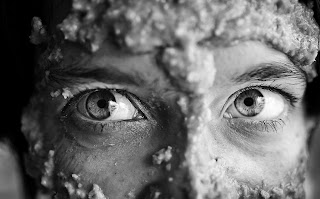 triplets), I was extremely emotional about getting this burned, mainly because of the minor dermatological procedure that left me scarred in January and my subsequent vow to be mindful of my time in the sun. After all the tears I'd shed on that day, I couldn’t believe I'd allowed myself to get sunburned again.

I had taken the proper precautions all along the way: wearing hats, spending time in the shade, applying and reapplying 50 SPF multiple times throughout the day. But all of my diligence was ruined in a mere four hours out in the water with Chapo.

Unfortunately for me, the damage done in four hours could not be undone as quickly. And though I had already been suffering the burn's wrath for several days, I faced many more despite my will to rid myself of the sunburn immediately.

I Googled, "at home sunburn remedies," which yielded thousands of results.

Not surprisingly, aloe was mentioned the most. I had already been applying aloe to the burn for several days, along with lotion, and cold compresses at night. I'd also been popping what Maribeth later told me was an overdose of Aleve for the pain. Some of the other recipes for remedies I hadn’t tried included milk, oatmeal, vinegar, egg whites, olive oil, cucumber, and cold water.

I texted Maribeth because she's a nurse and she already knew the extent of the burn. And because I was used to talking to her every minute for ten days and I missed her. She called me back and weighed in on all the remedies I'd read about.

She said I really couldn't go wrong with any of them, but cautioned me from being overly optimistic. I wanted the burn to be gone by Friday (it was Thursday); she reminded me that healing sunburn takes time and told me to be patient. She also urged me to take it easy in the sun over the weekend, since I was headed to Charleston for my friend Lindsay’s 30th birthday beach extravaganza. I told her I would, and packed an ample supply of muumuus and linen pants.

Looking for some immediate relief, though, I decided to make, as Day 221's thing I've never done before, my very own at home remedy for sunburn.

I followed one of the recipes I found on the Internet and mixed cooked oatmeal with olive oil and egg whites. Then I added mashed cucumbers on my own, just because I knew they’d be refreshing and cold, and could possibly take some of the sting away. I chilled the mixture for half an hour before spreading it all over my face first, and then the backs of my legs. And just because I wanted to see how unattractive I could possibly look during this little experiment, I sliced a couple of cucumbers for my eyes.

The mixture did feel good because it was cold, but I’m not at all convinced that it was doing anything to heal the burn. After my conversation with Maribeth, I was pretty sure nothing would, except for time. I could've rubbed jell-o or mayonnaise or hair gel and it probably would've felt the same, and yielded the same results.

Having to lie down on a beach towel on my stomach in the middle of my living room while oatmeal dripped down the backs of my legs was one of the most humbling and horrible experiences of my life. I felt defeated.

When Lauren emailed me and asked me what I was doing, I told her.

"I think this is rock bottom," I said.

It got worse. When I felt like I had let the oatmeal do what it was going to do, I got up to get into the shower and left a disgusting trail of slop from my living room, through the kitchen, and into the bathroom. I was a mess, the house was a mess, and I was nowhere closer to healing my burn than I was when I started. If there was a silver lining, it was that I took a cold shower to rinse the oatmeal off my legs, and that was soothing.

The at home remedy was overall a fail, to follow up the bigger fail of letting the burn happen in the first place. I said I learned my lesson back in January, but I mean it this time. Absolutely no more sunburns for me.

Unless Chapo is around, and then I make no promises.
Posted by Stephanie Gallman at 3:00 PM