One of the activities El and Erica had suggested we do while in Bocas was to take a boat cruise around all of the different islands. I liked the idea 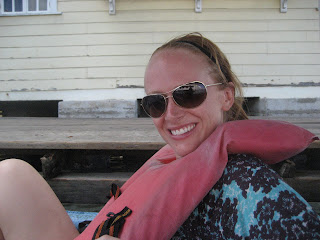 of exploring the area on water, but I had been on these kinds of tours before, and after getting stuck out at sea with my friend Lauren for hours in Thailand in hopes to catch a glimpse of where Leonardo DiCaprio filmed “The Beach,” I vowed never to do it again. The boat trip was crowded and so touristy it was borderline offensive, not to mention expensive. I did not enjoy myself at all. Plus the tour lasted for what felt like an eternity.
"Never again," I said. Never again.

Erica and El said they knew a boat captain, Batcho, that did private tours around Bocas for $60. It would just be us, and we could decide where we wanted to go, and how long we wanted to stay. That's the kind of boat tour I can get on board with, I thought. Maribeth agreed, so we asked our new friends to set it up for us.

We’d planned to catch the 8am cab from La Coralina to meet Batcho at 8:30am at the boat dock. El and Erica would pack us a cooler with lunch and drinks. It was a great plan for two people who didn’t try to talk to every single person in Bocas the night before.

But since we had done just that and came close to succeeding, the next morning we were moving very slowly.

As promised, the cab came to get us at 8am and with our cooler, we made it to the dock at 8:30am. It was truly a miracle. We jumped out of the cab, the driver took off and immediately we started looking for Batcho. 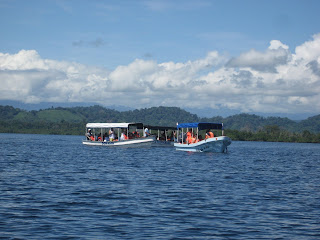 There were a lot of people standing at the dock, presumably taking boat trips like ours, so finding Batcho was going to be a challenge. We’d hoped Erica told him what we looked like and that he would approach us.

And we assumed she did, because almost immediately, a guy came up to us and asked us if we were here for the boat cruise.

“Are you Battia?” Maribeth asked.

“I don’t think ‘Battia’ is the right name,” I said to her, but I confess, at that time of the morning, I couldn't remember Batcho's name either.

The guy shook his head yes.

“We’re from La Coralina,” Maribeth continued, and the guy continued nodding and then pointed to the boat for us to board.

He asked us for just $20, not the $60 they had said he would, so I assumed this was just a deposit for the trip, and he'd collect the rest later. But I kept thinking that if that’s what he was going to do, Erica would have told us. I had a bad feeling about him immediately, but I ignored it.
While still sitting on the boat by ourselves, I looked around at the other boats full of passengers and said to Maribeth, “Ugh, I feel so badly for all those people crammed in that boat wearing life jackets.”

Just as those words came out of my mouth, though, more people started to board our boat and one of the co-captains started handing out orange life jackets for us to put on. 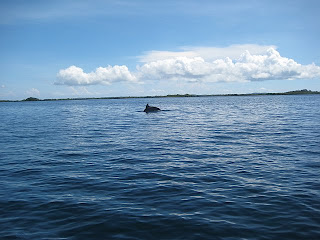 I started to have a freak out, well aware that this was not the boat we were supposed to be on. My realization came too late, however, and our cooler had already been stored on this boat, and the captain had already started untying us from the dock.

I turned to Maribeth and in the whiniest voice I've used since age 12, I said, "This isn't right! This isn't our boat!"

Maribeth sort of shrugged her shoulders as if to say, "Well that sucks."

My whining was futile, because it was too late to get off. We had been stolen from Batcho.

Day 216’s thing I’d never done before was to get kidnapped by a renegade boat captain/pirate, and suffer hours of touristy island hopping with strangers.

The first place we cruised to was Dolphin Bay to see (what else?) dolphins. After stressing the entire ride over about this not being the right boat, and about Batcho probably still searching for us at the boat dock, I resolved to pushing through the day and enjoying myself and the dolphins.
Not in a dorky, 12-year old girl kind of way, but I, like a lot of people, am fascinated by dolphins, so to see this many of them in such a short period of time in a relatively small area of the water was pretty amazing. Plus I saw a boat named "Stephanie," and it cheered me up for a little bit. A boat with my name on it: cool.

To see "Stephanie" and about a dozen other boats full of tourists in orange life vests chasing dolphins around the bay: not cool. 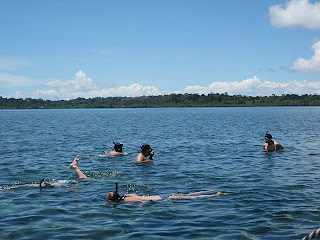 After Dolphin Bay and before lunch the captain/kidnapper took us to an area where we could snorkel. I have snorkeled several times in various locations, but after snorkeling here I understand why Panama is known for its scuba diving and snorkeling. The colors were so vivid and the fish were so close. Snorkeling in a Panama in a scene that felt like it was out of a video game: cool.

Snorkeling virtually on top of the other passengers from my boat and being told like a child when it was time to get out of the water: not that cool.

For lunch, our captain/kidnapper took us to a little restaurant near our snorkeling spot that was in a hut on stilts right on the water. Most of the other passengers ordered food, but since we had our own cooler packed with sandwiches, we were already taken care of. Eating a picnic especially prepared for us on a tiki hut with a view of the Bocas bay: cool.

Sitting out in the heat for half an hour after eating our sandwiches waiting for everyone else to finish their meals so we could move on to the next spot: not as cool.

We moved on to the Red Frog Beach refuge for a few hours of uninterrupted beach time. The boat captain/kidnapper dropped us off at a dock and pointed straight ahead in the direction of the beach. At this point in this "boat trip gone wrong," Maribeth and I were so tired and so slap happy, the ten minute walk to the beach along a gravel road (not cool) turned out to be one of the most hilarious walks in the history of my life (super cool). I think I may have wet myself a little (not cool, embarrassing) at some point along the way. The fact that we missed the boat we were supposed to be on, Maribeth's mispronunciation of the boat captain's name, our antics the night before suddenly all became overwhelmingly hilarious. I hadn't laughed that hard in a long time and it was not just cool. It was awesome. 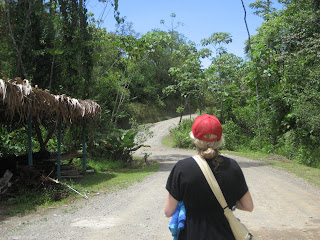 After a handful of wrong turns along the not cool road to the beach we arrived at our destination and we were greeted by four super cute Panamanian kids holding folded palm leaves in their hands.

"Do you want to see a red tree frog?" they all asked us at once.

"Hell yes I do," I responded, enthusiastically. That's pretty cool.

They all unfolded the Palm leaves, each revealing the smallest, brightly colored red frog I'd ever seen. Maribeth and I reached for our cameras and each snapped a photograph.

After we took a picture of the tree frog, all of the kids immediately held out their little hands and asked for $5. Five dollars to take a picture of their tree frogs? For $5 I want my own tree frog as a souvenir, kids! Though I always feel bad for children in any country forced to beg for money, this little stunt was not cool with me at all. I gave them cookies instead.

Maribeth and I found a place under a tree to lay our towels down and try and take a nap. Red Frog Beach was gorgeous and I was glad to have more of a typical beach experience on sand that I was used to. Slowing the tour down for a couple hours so that we could relax for a little while: cool.

The sun chasing me down despite my desperate attempts to escape it to take a nap in the shade: Not. Cool. At. All. 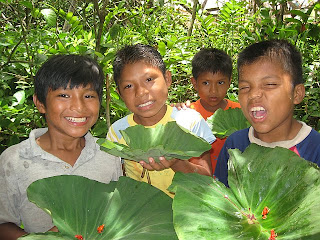 Despite our bad attitudes from the start, we did manage to have a good time and definitely made some hilarious memories in spite of ourselves. And overall, the tour was fine. Definitely not the coolest thing I've ever done, but we did get to see a lot of Bocas.

When we made it back to La Coralina, Erica said, “Hey what happened with Batcho?" We hung our heads in shame and told her that we were stolen by a renegade boat captain and forced to endure hours at sea on a crowded boat with strangers.

The silver lining, and Erica agreed, was that the entire day's events only cost us $20.

Because of the night before, and an exhausting day out on the boat with all the randoms, we opted to eat dinner at La Coralina and put our Panama-sized hangovers to bed.
Posted by Stephanie Gallman at 6:25 AM