One of the first things I learned in Senora Melo's Spanish class in 9th grade was how to order drinks and food in a restaurant.

"Psssst...Camarera! Quisiera una agua, por favor."
"Perdon, Quiero un taco con pollo, por favor.
"Necesitamos dos cervezas. Gracias."
Senora Melo was an excellent teacher and because of my affinity for eating, I'm thankful that she taught me how to order food first. I may not be able to read a map, or apply for a job, or introduce myself to anyone, but as long as I'm standing in a restaurant, I'll never go hungry. 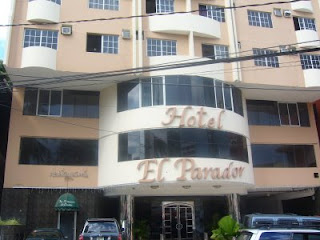 Thanks to her, and all of my other Spanish teachers over the years, I was feeling good about my ability to communicate in Panama, but I'm well aware that what made me successful was as much non-verbal as it was anything else. Between pointing at things, miming, and nodding my head, speaking Spanish for me is like a game of charades.
Talking on the phone in a different language is a completely different animal, however, because you can't motion to anything, or see the other person's expressions. All you have is words. And as I learned in Spanish IV my senior year of high school, this makes communicating extremely challenging, especially if the person the other end of the phone isn't Irmo High School's Senora Stafford, but a 16-year old Panamanian waitress talking your room service order.
Day 219's thing I've never done before was to order room service in Spanish.
To understand why we were ordering room service at all, I'm going to have to go back to the start of the day.
When Maribeth and I boarded the plane from Bocas del Toro to Panama City, we looked like death and we felt worse. The sun, the sand, the rum, it had taken its toll in a big way and all we wanted to do was sleep. In an air-conditioned room.
So back in Panama City for less than a day and one night, we opted, instead of more sightseeing, to hibernate, literally, in our hotel room.
These plans to camp inside our air-conditioned room had been hatched long before we ever even arrived at our hotel, and were almost derailed when we got our room key, walked into a room that was so hot, we might as well have still been on the beach in Bocas.
At that moment I wished that the first thing Senora Melo had taught me in Spanish class was how to say, "It's far too warm in here and all my friend and I want to do today is lay around in air conditioning and watch old American sitcoms. Isn't there anything you can do to make the air colder? Please? Now? Please!"
I did the best I could with the bellman, who was extremely accommodating. We moved to another room, which felt slighty less like hell in the summertime, but not by much. I kept repeating, "Hace calor," until he fiddled with the vent on the window unit and got some air flowing.

We drew the blinds, crawled into our beds, too tired to care about the heat anymore and slept. I'm not sure how long we slept, but we woke up starving. We went back and forth from our beds, about whether or not we should go out to lunch, and enjoy one last afternoon in Panama City. 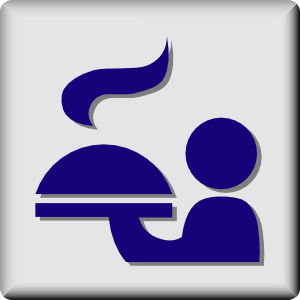 And then an advertisement for an episode of Felicity came on the American television channel, and the decision was made. We looked at each other, our eyes wide with excitement like we'd won the lottery. Room service it is.

Thankfully Maribeth and I wanted more or less the same thing, which made ordering somewhat easy. Grilled cheese, french fries (patatas fritas) for her, plaintains (platanos fritos) for me. I also wanted a fruit salad (ensalada con frutas) and she wanted a Crunch bar, which they didn't have, so we ordered chocolate cookies (oreos) instead. I had to repeat myself several times and I often found myself still pointing at the menu item as if the girl could see what I was referencing. But when I was done she repeated the order back to me and it sounded right.

I hung up the phone, turned to Maribeth and said, "I'll be very interested to see what they bring us."

Within a half hour, we heard a knock at the door and we nearly tripped over each other trying to get there, we were both so hungry.

I was elated at the sight of food, but even more elated that everything I intended to order was there on the room service tray. We dove into the food, spreading it out on our beds so we wouldn't have to sit upright for very long. Gross, I know. The only mishap seemed to be the sandwiches, but when we went back to the menu, we realized that the order wasn't lost in translation, we simply ordered incorrectly. Instead of a grilled cheese sandwich, I ordered us a cheese sandwich with lettuce and tomato. I did not care. It was tasty.

After we ate, we laid back down to watch some more mindless television. For those of you who are curious, this episode of Felicity was the one when Ben's father is ill and his mother opts to give him a kidney or some organ to help save his life, which upsets Ben because his father is abusive and not a very nice man. His dad ends up doing fine with the surgery, but of course his mother does not, so Ben and Felicity stay at the hospital and talk about how much they love each other and how love is blind. Solid. Gold.

We did not leave our hotel room the entire day. Actually, I did leave to go to the computer lab to post a blog (you're welcome) and walked briefly out on the roof to look at the pool. But when I walked outside the sun nearly blinded me and the heat on my over sunned skin was almost more than I could stand. I quickly returned to the room for more air-conditioned napping.

Maribeth and I finally rose from our comas in the early evening, but only long enough to go to dinner at a restaurant that looked like it was decorated with the Love Boat in mind (the food was excellent, the decor was just a little dated) and then to the grocery store so I could get some aloe for my burnt backside.

We are old and lame.
Posted by Stephanie Gallman at 9:00 AM