Still banned from watching television and home alone on a Friday night, I found another way to entertain myself on Day 306. I had no other choice than listen to talk radio on my computer.

Actually there were a lot of other choices of things that I could do. But by choice, I opted to make Day 306's thing I've never done before listen to an entire episode of A Prairie Home Companion.

A Prairie Home Companion is a live radio variety show created and hosted by Garrison Keillor. The show runs two hours on Saturdays and usually originates from the Fitzgerald Theater in Saint Paul, Minnesota, although it is frequently taken on the road. 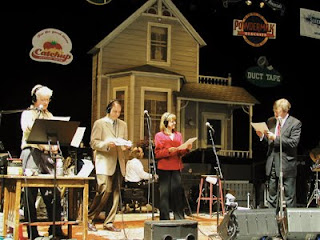 Because it was a Friday during the summer, I listened to the July 24th archived broadcast, which was a mix of several shows over the past few years from the historic State Theater on in Minneapolis, Minnesota.

I can appreciate good talk radio (This American Life is my favorite; Ira Glass is a genius), and I know that by most people's accounts, A Prairie Home Companion is one of the best, but I didn't love it. I did like the music, which included performances by Ricky Skaggs and Wilco, but the comedy sketches were a little hokey for my tastes. Maybe I'm too young to appreciate Garrison Keillor's sense of humor or maybe I'm just stupid and this program is over my head, but I was bored most of the time.

Plus, I felt like a first-class loser listening to a radio program on a Friday night at my house by myself.

I'm not arguing the quality of the program; I mean, I know it's good. The show has been on since 1978 (minus a few years off the air). It's a classic.

Here's to never spending another Friday night like this again.
Posted by Stephanie Gallman at 3:28 PM