Day 307: Quick! Do Something Young and Awesome!

Day 307 was a Saturday, and the same day as my friend Katy's birthday celebration, so after spending the day at my landlord's pool reading (no TV f 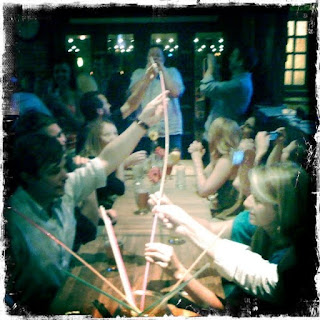 or me), I planned to make the thing I've never done before another "birthday girl's choice."
Katy said I had to swim in the fountain in front of her house.

But I will celebrate your birthday as if it was my own. Because that's what good friends do.
Starting, of course, at the Nook, where I shared my first fish bowl beverage with at least eight other people, six of whom I really didn't know.

One of whom is now my worst enemy. She was blonde and cute and young, three traits I despise in other women. My friend Jeff introduced me to her and said, "This is Awesome Girl! She went to Georgia! She was in your sorority!"

She was super sweet, and told me that she had just graduated in May. She was adorable. I was happy that she seemed normal and cool; clearly she was representing my Alma mater and my sorority well. 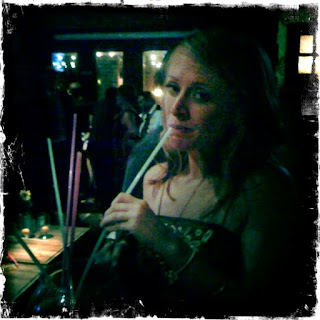 Then she told me she was absolutely "freaking" because she was just about to turn 24. Twenty-freaking-four.

Then I decided that I hated her.

How do I remember college so well when it was so long ago? Was I ever as cute as this girl? Am I still now?

"Quick, Stephanie! Do something that makes you feel young and awesome," I must've told myself later when I remembered my conversation with the younger version of myself.

Katy suggested dancing on a bar.

"Yes!" I said. I've always wanted to do it. I dance everywhere I go. I can't believe I haven't done this yet.

Katy grabbed my arm, and we marched up to the bar. Before I could muster the nerve to crawl up on the bar, Katy was asking the bartender if we could. 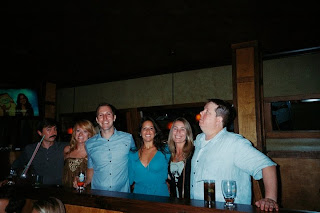 The bartender didn't waste anytime with her answer.

Katy turned to me, and shrugged her shoulders. "I'm sorry," she said. She really felt badly, but I wasn't really that surprised.

"You can't ask a bartender if you can dance on their bar," I said. "You just have to do it."

Not to be defeated, when we went to Smith's Olde Bar, Katy modified her desire to dance on a bar, and instead climbed up on a booth to dance. I joined her without hesitation. We laughed and danced, but I couldn't help but r 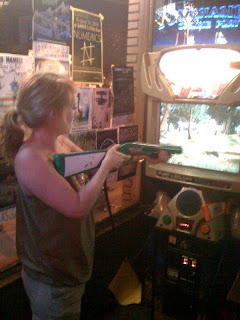 emember thinking that dancing on a bar always looked like fun. And the people doing it looked young and carefree.

Only I didn't feel young or carefree. I felt like an idiot.

I climbed down and snapped back into reality.

Later, Justin suggested that I play a round of Buck Hunter as Day 307's thing I've never done before. And before long, he shoved a gun into my hands, and I did.

And I played a mean round of Buck Hunter, a game much like Duck Hunt on Nintendo, only with a larger gun and cartoon deer instead of ducks. I wasn't very good, but I had a good time shooting all over the screen. If memory serves, and it was very late that night so it probably doesn't, I don't think I killed a single deer. But I made a mental note to tell my hunter friend John, who had taken me hunting back in December that this was the kind of hunting I could get into. Loud, fast, no loss of life and no blood.
So Katy's birthday party turned into a mini-celebration for me. A celebration that I'm not 24. I can't play video games and I have no business dancing on bars. Sometimes celebrating hurts.
Posted by Stephanie Gallman at 4:49 PM