On Day 305 I was supposed to drink a non-alcoholic beer with my then-pregnant friend Trish as the thing I've never done before.

But Gallas, the restaurant that we went to for dinner, did not serve 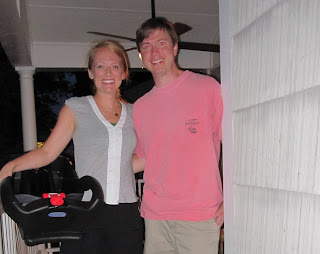 non-alcoholic beers. I feel this is discrimination against pregnant people, and I told the woman who took our order. She agreed, and promised to have the problem rectified immediately.

Pregnant women need beer too. Is it so hard to provide them with what they need?

With no other ideas, and not really wanting to make my eating at this restaurant for the first time the only thing I'd do that day, Trish came up with several other plans, all of which involved putting something together for the baby.

Her final suggestion: "Why don't you help us install Will's car seat?"

Done. A winner for us both: Trish can check it off her pre-baby checklist, and I can do something I've never done before.

I paused momentarily, however, considering Trish's husband Mark, who is fabulous in many ways, but most of all in his desire to be completely involved in his son's life from the start. I always thought to myself that if Mark could've, he 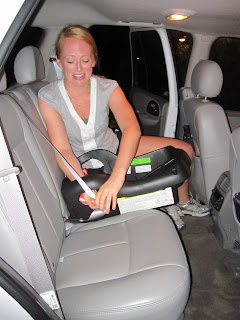 would've carried the baby himself so that Trish didn't have to. But he even said so himself on the car ride home. He even said that he would've given up drinking altogether. Trish responded, "bull shit," to his remark, and we all laughed.

My concern was that maybe Mark would want to install his child's car seat. What if he felt like doing so was his dadly duty? I certainly didn't want to take that away from him.

When we got back to their house, I asked Trish if she thought Mark would feel slighted if I installed the seat. She gave me a look like, "Are you crazy?," and said, "Whatever! He doesn't care!"

I was, of course, also concerned that we're dealing with a very important task here--their soon-to-be-born baby's safety was at stake here. This wasn't some meaningless fun thing for the blog. This was life or death.

For those two reasons, I requested that both Mark and Trish both be present for the entire process. I wanted as many people involved as possible to supervise my work and give me step by step instructions. Not surprising, they both agreed. What was surprising, though, was how easy installing the car seat was. 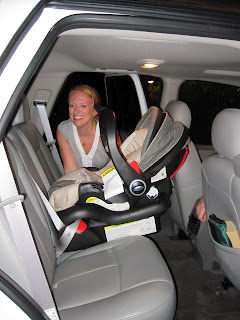 In fact, the hardest part about the installation was accepting the fact that I was installing a car seat in Trish's car. Trish, my group's social director is going to be a mother? The girl that I back-packed across Europe with and the one who performs "Proud Mary," with the band at every wedding reception she ever goes to. She's having a baby? How did this happen? Weren't we just short sheeting each other's beds in college?

Luckily, the car seat companies recognize that most first-time parents are like Trish and me: completely clueless, and they make installing the device pretty easy and pretty much idiot-proof. In fact, Trish told me cars made after 2003 are required to come equipped with a LATCH system that makes car seat installation almost automatic. She opted to put her car seat in the middle of the backseat, so we used the old seat belt method, securing the base into the car. We threaded it through, checked the balance, gave it a shake test, and we were all set. That was it. The entire process took less than 8 minutes.
Trish and Mark, ready for baby. Trish and Mark's car, now (thanks to me) also ready for baby.
Me, on the other hand, not as ready. But I'm getting there.
Posted by Stephanie Gallman at 3:50 PM

Email ThisBlogThis!Share to TwitterShare to FacebookShare to Pinterest
Labels: Mark I., Trish