The good (and sometimes bad) thing about telling others that you're on a quest to try 365 things you've never done before is that when anyone else is scared to try something, they'll ask me to test it out first. 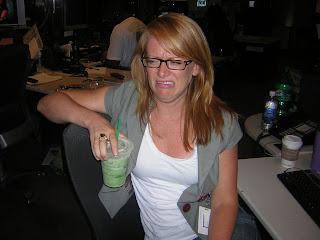 That's what happened on Day 299, when I saw a very determined-looking Amanda approaching my desk at work.
"Stephanie," she said, "Have you ever had a Green Tea latte from Starbucks?"

"No," I said, and while answering the phone with my left hand, I held out my right hand and she handed the mint green frothy-looking drink to me.
After I hung up the phone, Amanda explained to me that the store's baristas had messed up her manager's order and accidentally made a latte instead of the iced green tea she had ordered. The staff at Starbucks corrected their mistake, and gave her the latte to give away to a friend.
Luckily the "friend" in this case was me, and trying a Starbucks Green Tea Latte became the first Day 299 thing I'd never done before.
The drink looked tasty. Like mint ice cream. I started to take a sip and then Amanda stopped me.
"Wait! Where's your camera?!" she shouted, "We need a picture." 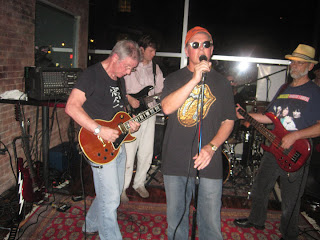 Her commitment to this project is truly something to behold.
While she got the camera ready to go, I looked again at the creamy, pretty drink before taking a drink. I cannot explain how misleading the looks of this drink are because it tastes terrible. I took one sip to taste it, and another just to verify that it's gross. There may have been a third sip for good measure, but that was it.
And then I threw the drink away.
The second thing I'd ever done before on Day 299 was to go see The Psychics, an Atlanta cover band, featuring my friend Shelley's father-in-law on lead vocals. She informed the group at the Wine Party on Day 247 that she and her husband would all be at Friday's performance.
"They're a lot of fun," she said, "I mean, they're our parents' age, but I always have fun when I see them play."
Shelley, like my sister-in-law Katie, can have fun in a paper bag, so I knew even if the band was awful, the night would still be a blast. 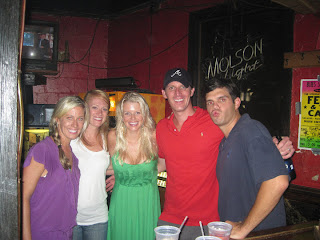 The night was a blast. And the band wasn't awful at all. In fact, they were pretty great.

Ahead of going, all I knew about The Psychics was what I had heard from Shelley and Kyle, who told me the band has been around for more than 30 years. Shelley's father-in-law is a doctor and the thought of him holding band practice at his house with his rocker friends is amusing to me, only because when I try to picture my own dad and two of his buddies getting together to start a band, I can't. I laugh hysterically at the very thought.

So I went, expecting to have a good time with Shelley and Kyle and crew, but not really expecting to enter the bar to an absolute dance party, led by three men my dad's age in rock star t-shirts and John Lennon sunglasses. This will sound cheesy, and Shelley will completely roll her eyes, but The Psychics are proof that age really is just a number, and who says doctors and architects can't moonlight as rock stars into their 60's? Who says?

So, the day started with something that looked good that ended up tasting pretty bad, and ended with a band I wasn't expecting to really care for, bringing the house down. I love it when that happens.
Posted by Stephanie Gallman at 11:30 AM