When people ask me if I like my job, my answer is usually the same:

"Yeah, I like my job. And I really love the people that I work with."

My co-workers have, over the years, become like a second family to me. They've appeared countless times in my blog, fully supportive of me completing 365 things I've never done before. They also see me everyday, so sometimes they know more about me than my real family and my closest friends. And following recent disappointing events, I was relying on them more 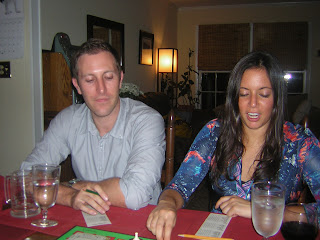 On Day 289, Deer Hunting John invited me over to his house, along with two of my other work brothers (Black Friday Mo and Kick Boxing Justin) and my work sister (Pillow Fight Katy) for dinner. It was my first work dinner party, so technically that was the thing I'd never done before. And as usual, one new thing led to several others that evening.

Ahead of the party, John emailed some of us to let us know what time we needed to come over. He also mentioned what was on the menu.

"I'm making steaks," he said. "I hope that's okay with everyone."
When someone invites me over to their house for dinner, I generally accept that I'm going to eat whatever the host is serving. An easy task for me most of the time, since I don't have any food allergies or diet restrictions. I'm more of a go-with-the-flow, eat-what-is-put-in-front-of-me kind of girl. Only I hadn't, by choice, eaten a full steak since I was in the 9th grade. I'm not a strict white-meat only eater, but I just choose not to eat red meat. There was a part of me, then, that was nervous about the meal. I knew I'd probably like the taste of it (since beets are now the only food that I do not like.) I was concerned, however, about how my body would respond to it. I had eaten a hamburger a few years ago and it didn't go well. But in the spirit of Project 29 to 30, I made the decision to eat the steak.

The fact that I don't eat red meat came up in a conversation John and I had at work ahead of the dinner party. John, ever the gracious host, offered to make alternate plans for me, and throw a chicken breast on the grill. 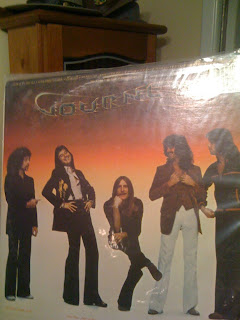 First of all, I find it terribly depressing that it was 17 years ago that I was in 8th grade. Secondly, and I'm getting ahead of myself here only because I hate to leave you in suspense, I ate John's steak. Under the watchful eyes of everyone at the table wanting to see my reaction to my first bite in almost two decades, I ate it up. And I completely understand what all the fuss is about. Steak is tasty.

Like the hamburger, the steak unfortunately made me terribly sick the next day, but I'm not sure if I can blame that on the steak or the several bottles of delicious red wine we consumed. I think, at least for me, that red meat is a lot like alcohol and serious exercise, and something I need to develop a tolerance to. Maybe eating all of the steak was a mistake.

A grown-up dinner party and my decision to eat whatever John and Ana were serving may sound mature, but have no fear, blog fans, the rest of the night was on the opposite end of mature.

Starting first in John's man room, where Katy and I picked through nearly every single record that John owns (and there were a lot), disrupting the alphabetic order to select just the right play list for the evening. The Beatles White album was first, followed by The Rolling Stones and Michael Jackson. 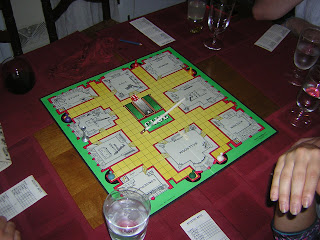 There is just something about the crackle and pop of vinyl that is so amazingly cool to me and it made me want to own a turn table and a vintage record collection immediately.

I thoroughly researched dinner party games that the group could play as a post-dinner activity that I'd never done before. The results on the Internet were somewhat disappointing and I only had a couple of suggestions. Charades was a possibility and a personal questions game ala "Never Have I Ever," was also on the table. In the end, we opted for a board game, John's first edition game of Clue gaining support of nearly everyone.

I point out "first edition" because I seriously think John's version of Clue was one of the first one's ever made. Everything about it screamed, "classic," from the old game pieces to the yellowed board. Despite its age, I was impressed with the condition the game was in and thought about how all of the games my brother and I owned as kids were all missing some game piece. Not John's Clue game. It may have been from 1942, but all the pieces were accounted for.

After a rousing game of Clue, that Mo won, of course, because he always wins stuff, we moved onto another familiar game with an unfamiliar twist.

Yes, we are all tax-paying, contributing members of society who played Dirty Jenga on a Tuesday as Day 289's other thing I'd never done before. Jenga, of course, is the game where players remove wooden bricks one at a time from a tall stack, placing them on top until a player (usually me) removes a block that upsets the structure and causes it to crash. Dirty Jenga is the same thing, only every wooden block has a personal question or task that the player has to complete. I didn't know, until this night, that a party game that already gives me copious amounts of anxiety was capable of bringing more anxiety and possible embarrassment, but it can. 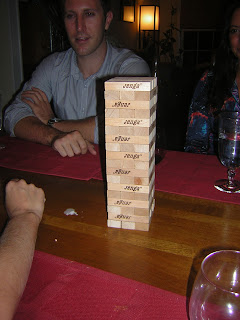 There was a lot of sharing after that. Most embarrassing moment (when I fainted at Bath and Body Works and had to be wheeled through the mall on a stretcher), and the last time I cried (at Kroger on Day 283). Because we all feel like we're related, we skipped over the blocks that told us to kiss the person next to us, but when it was my turn and I pulled the block said, "Perform a dance for the group;" that just so happened to also be the time that the record player started playing, "Working Day and Night," by Michael Jackson.

So what else could I do then but get up and perform a dance, circa 1999, for my work brothers and sister? A dance that thankfully was not caught on film. I think everyone was so surprised at my willingness to perform such a routine, they wouldn't have been able to take pictures if they wanted to. What can I say? Sometimes the music moves me.

And sometimes family, I learned, this cobbled together work family that knows me better than I thought, is there for me, right when I need them the most.
Posted by Stephanie Gallman at 12:15 PM