On Day 291 I attempted to do a one-armed push-up as the thing I've never done before. 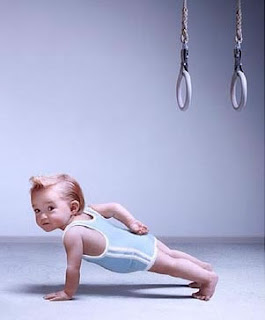 I really thought that this would be something I could do. I'm in shape, and I consider myself fairly strong for a woman; plus anyone that I've ever seen successfully do this before makes it look easy.

So down I went, in the middle of my living room floor, with only one worry: how I would effectively capture my completion of this task on film.

I panted, I grunted, I gasped for air as I desparately tried to lower myself on one arm. I don't care how it looks on television. One-armed push-ups are not easy.

Justin, who works out a lot and who has probably done a few one-armed push-ups in his day tells me that I must be doing it wrong because according to him, I "can definitely do it." I'm not convinced. I've tried it several times since Day 291 and I still can't do it. Not even girl-style.

I'm not sure if I'm not doing it correctly, or if I need to log some more hours in the gym.

Probably both.
Posted by Stephanie Gallman at 5:43 PM