If the last few days of blog entries have felt lame, uninspired and lacking motivation, it's because that's how I was feeling mid-July. The heat was stifling my excitement for trying new things. 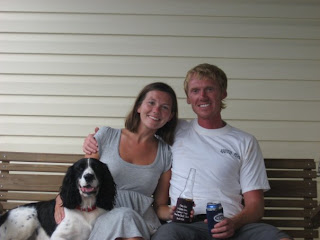 I chalked it up to the dog days of summer and feeling landlocked; and I knew whatever was ailing me was nothing that a trip to the beach couldn't cure. So I took a couple of days off from work and planned a long weekend getaway to Charleston, my most favorite place to go to escape my real life. In my mind, I would lie by the ocean, sip cold drinks at beach bars, catch up with family and friends with the salt on my skin and everything would be summertime awesome once again.

Only, I forgot to tell anyone about these plans that I had so carefully planned in my head. And when I called my brother Jeff to tell him to get his guest room ready, he surprised me with, "Katie and I are going to the mountains this weekend."

Whoops. That's not really what I was expecting him to say, but he and Katie not being in Charleston was a slight disappointment, not a trip-ending crisis. There are plenty of other people in town to warrant a visit.

My conversation with Jeff continued for a little while before he made me a very generous offer, "Do you need to stay at our house? Do you want me to leave you a key?"

My own Charleston house for the weekend and no worry over about which friend to stay with? Yes, please. I'd be on neutral ground without getting in other people's personal space. Again, I 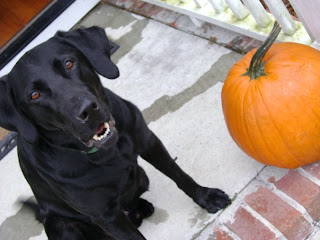 was sad Jeff and Katie wouldn't be around, but everything was start to take shape up for a great weekend.

I took Jeff up on his offer (before he could change his mind) and thanked him. Then I thought about my second favorite thing about Jeff's house (besides hanging out with him and Katie).

"What are you doing with Ron and Penny?," I asked.

Ron and Penny are Jeff and Katie's dogs. And I love them dearly (remember when I put them on my list of things I'm most thankful for back in November?). This is going to sound nuts, but I love them the way that I imagine I will love my nieces and nephews one day. I want to make them happy and keep them safe and ensure that their needs are met above mine. Weird, I know, but I love them a lot and I can't really explain why. I just do.

"Why are you taking them to mom and dad's house?," I asked. "Let me take care of them!" I was almost shouting into the phone, this possibility excited me so much.

Jeff was silent on the other end, and I knew he was now contemplating my generous offer.

"Are you sure you want to do it? I mean, these dogs are crazy."

I was sure. But his reluctance to take me up on it immediately gave me pause. But I was so excited about the possibility of playing, "house plus dogs," my hesitance only lasted a moment.
"Yes! I'm defnitely sure! Let me dog-sit!," my enthusiasm was pouring out of me.
The rest of our conversation went back and forth for a few minutes, sort of like this: 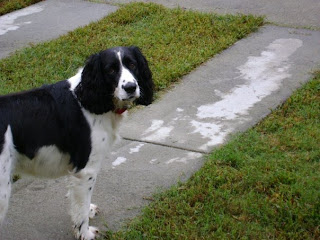 Jeff: Are you sure?

Jeff's concern didn't seem to stem from him not trusting me. The very last thing my brother ever wants in life is to become a burden for anyone else. But when he considered how my taking care of the dogs would save him some trouble on both legs of the trip, he was grateful for my offer and agreed I could dog sit for Ron and Penny as Day 292's (and 293, 294 and 295) thing I've never done before.

I arrived at Jeff and Katie's on Day 292 so that Katie could give me the instructions on the ins and outs of dog care.

She showed me their food and water bowls and explained how I needed to shut the doors to all of the rooms before leaving. The dogs stay outside during the day, but sleep inside at night.

"Do you want me to take them on a walk?" I asked, "Where are their leashes?"

"Um, yeah . . .," she sound enthusiastic at first, but then her voice trailed off. She turned to show me where the leashes are and then stopped herself.

"You know, maybe you should just hang out with them in the backyard? They're a little . . .much. They're just not good on a leash. They're just too much."

I shrugged my shoulders, taking her word for it. I still wasn't particularly nervous, but so far Ron and Penny's owners had described them as, "crazy," and "a little much, "so maybe I should've been? I had to face the fact that I'd signed on to take care of two rambunctious dogs for the weekend for the first time ever and I might've been in over my head.

Once I felt like I had a handle on what I was supposed to do to keep the animals alive, Katie and I went to grab lunch on her way out of town. When we were done, I headed back to the house to start my dog-sitting.

When I got back to the house, I started to understand what Jeff and Katie had been warning me about. As soon as I walked towards the fence in the backyard, Ron and Penny were barking and jumping up and down like they were on a trampoline. I knew they were spirited dogs but I'd never seen them freak out this much.

I figured I'd go into the backyard, throw them a tennis ball for a little bit, and tire them out. Only when I opened the back gate ever so slightly, they almost knocked me over, breaking free and running wildly through the fence into the front yard.

Penny went straight for one of the big trees in the front yard; she put her front legs on the tree, 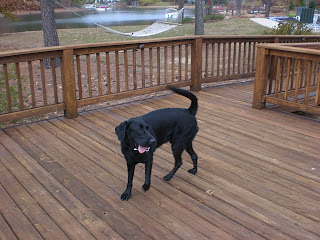 and looked up as if she was going to climb it, all while barking at nothing in particular. I've seen her do this before at my parents' house, so I wasn't overly concerned. Ron was even more insane, running full speed into the street, like he was chasing something; once he realized there was nothing to chase, he paused, looked around, and then began trotting down the road with no clear destination. I ran after them, yelling both of their names trying to feel, and give anyone passing by the impression, that I knew what I was doing.

The dogs were not listening to me at all, and they acted as if they'd been cooped up in a pen that was too small for them for months. Though I was nervous to leave them out there, I gave up quickly on trying to wrangle them in through the fence they broke out of. They weren't even turning their heads when I called after them. I opted insted to get them in through the front door.

Thank goodness, it worked. I'm assuming the only reason is because they knew I was the keeper of the food, the water, and the air conditioning, but I didn't care. They were finally inside where I could keep an eye on them.

They came in the house and went straight for their water bowl that I had already filled with fresh water and ice cubes (best dog-sitter ever, right?). I left them for a bit while I moved my suitcase into the guest room and then to check my email.

When I returned to the living room, I noticed both dogs were lying down, but that Ron was furiously licking both of his front paws. I went over to see what he was licking at and when I looked closely, I saw that he had cuts on both of his legs, and they were bleeding slightly. He didn't seem to be in distress at all, but I immediately panicked. I laid down beside him to comfort him, and to inspect the cuts, which were strange, almost like a shaving cut on a human. I felt terrible. I was also completely in shock that he managed to cut himself while in the front yard for a maximum of 20 minutes.

I texted my brother right away to tell him. He was only 30 minutes outside of town at that point. He didn't seem too concerned, and told me to keep an eye on it.

I looked around to see which one of these dogs made the carpet their dumping ground, but as Katie has explained to me before, when there are two pets, sometimes it's hard to tell who is responsible for bad behavior. And this mess didn't look like a punishable offense, it looked like one of the dogs was sick. I tried my best to clean up the mess and put carpet cleaner on it, but I could still see a stain. Again, another text to Jeff. This one went unanswered.

I realize that none of these things were 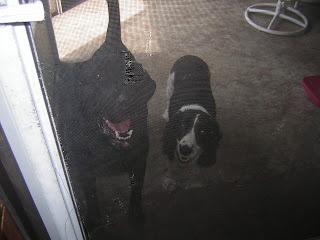 completely my fault, but I had been dog-sitting for less than an hour, and so far both dogs had escaped, one had cuts on his paws and one made a mess on the carpet, and I wasn't sure which one. So far, not so good. Thank God these were just dogs we were dealing with and not children.

In addition to these three mishaps, the dogs were moping around the house with sad eyes and they looked at me like their parents had abandoned them for the weekend with their irresponsible aunt who doesn't know much about taking care of dogs. I texted both Jeff and Katie at various points during the weekend saying, "Your dogs miss you," and, "I think the dogs are depressed." Jeff was not really helpful responding once with, "Yeah, they probably are." I tried to spend as much time with Ron and Penny as I could, but they seemed uninterested in me.

Luckily, all of the messes and injuries, and their subsequent sadness only lasted the first few hours I was there. The dogs perked up, and rest of the weekend was fun, full of hilarious moments with me and my favorite pooches. I chased them through the backyard and let them sleep in the bed with me. I even introduced them to my friend Will's brand new puppy. The puppy will never be the same, but Ron and Penny had a blast.

Friends who feel sorry for me that I live alone have been advising me to just, "Get a dog," for years. I've always put them off, explaining that I love animals, dogs especially, but at this point in my life, I'm not sure I'd be a good dog owner. No poor, unfortunate animal should be subjected to my long days at work, tendency to be forgetful, and constant need for spontanaeity.

But based on my weekend with my two favorite four-legged pals, the first half-hour excluded, I know that I will make a great mommy to a dog one day. I liked being depended on and liked having a reason to return to my brother's house and having two excited pets there to greet me when I arrived. Just like the movie Marley and Me, (that that I have a difficult time even typing without crying), dogs don't care how pretty you are or how much money you make. They love you just they way you are.

And though I have a feeling they'll never feel about me the way they feel about their parents, there is nothing like feeling the love of a pet.
Posted by Stephanie Gallman at 11:15 AM