Day 303 had been in the works for a while, and the idea came courtesy of my friend Amanda (of walk the mall, workplace romance, and online dating fame).

"Have you ever run through the rings at Centennial Olympic Park?" 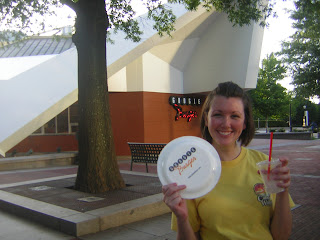 "No," I said, and I'm sure I made a face too. She asked me this question in the middle of winter and the idea sounded terrible.

"Well when the weather warms up, we should do it."

I agreed. It's cheap, it's fun, it's something every Atlantan must do.

And on Day 303, the weather was plenty warm enough. It was downright hot. Time to put Amanda's idea to the test. Only thanks to her work schedule and a mid-summer sinus infection, she couldn't actually join in the fun.

Emily and Mo could, though. Day 303's thing I've never done before was to eat at Googie Burger, drink a spiked milkshake, and run through the rings at Centennial Olympic Park.

After some discussion at work ahead of the trip, we decided that we'd eat first and then run through the fountain. Emily and I met Mo at Googie Burger, a new walk-up burger joint inside the park. We stood back from the ordering counter and eyed the menu, which was short and sweet: Classic Googie Burger (Cheeseburger), Beefy Pig Burger (Bacon Cheeseburger), Flying South Sandwich (Fried Chicken Sandwich), Veg-Out Burger (Black Bean Burger). They offered a Kids Meal and fresh-cut French Fries. 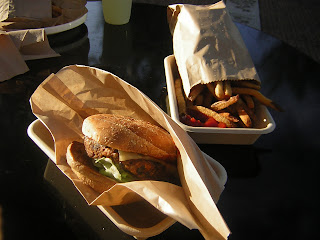 Emily got a kids meal, Mo went for the Classic, and I opted for the Veg-Out.

I paid for my meal and the attendant slid me my receipt.

"You're Googie number 69," she said with a smile. I turned and looked at Emily and Mo and we all burst out laughing, proving that though our birth certificates say we're adults, our sense of humors still rival teen aged boys.

My Googie number was the number that they shouted down at the loud speaker when my order was ready, so we got to hear them say, "69," several other times. And we laughed every time.

I swear the teenagers in the back were making up excuses to say it on the intercom, I felt like they said it so many times. The almost-30 year old in me wanted to march up to the counter and tell them to stop, reminding them that there are kids in this park. 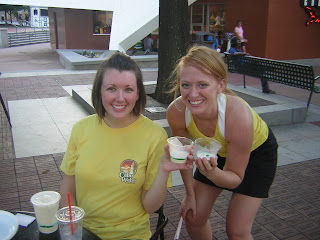 When I did my retrieve my food and walked it to our table, I was completely overwhelmed. The portions were huge. Not too huge that I didn't wolf it all down, but I probably would've been equally satisfied with Emily's Kids Meal portion. And her meal was served in a frisbee!

I honestly cannot say enough wonderful things about Googie Burger; their black bean burger is one of the best I've ever had. Their fries are perfection. The flies were all over us and our food while we ate (there are only outside tables at Googie Burger) and that was annoying, but a small price to pay for the delicious meal.

Admittedly, a milkshake with alcohol was a definitely the reason we went to Googie Burger in the first place, and had the food been terrible I would've still said good things about it for having come up with a concoction so ingenious. But the food really is good. And the milkshakes are so good.

Emily and I went for the Twinkie and Mo got the Red Devil. 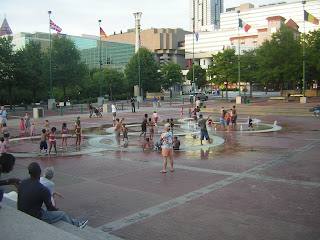 When I went to retrieve my shake, (again, after they called "69" loud and proud over the intercom), I saw two regular cups full of milkshake, and two smaller cups half full of milkshake. I was confused. The guy behind the counter could tell, so he explained.

"That's the leftover," he said, "I just wanted to make sure you got all your vodka."

I love you, 16-year old kid behind the counter. I love you, Googie Burger.

Benjamin Franklin said, "Beer is living proof that God loves us and wants us to be happy." Spiked milkshakes are also proof of God's love, and could serve as evidence that God is probably a woman.

We walked our shakes over to the fountain and surveyed the very large, very lively, very young crowd. That's pretty standard for summertime. Centennial Olympic Park is a popular tourist attraction as it is, but the Fountain of Rings, a water exhibit in the shape of the Olympic rings, draws a crowd of locals all summer long.

After watching the pure joy on the faces of the children frolicking in the fountain, there was nothing left to do but get out there and do it ourselves. But I knew the "run through the fountain" I had imagined and that Amanda had suggested was not going to happen. There was just too much going on, too many people to do so without seriously injuring ourselves or the little kids.

We took our shoes and socks off and set some ground rules. We'd go in pairs, each of us had to go 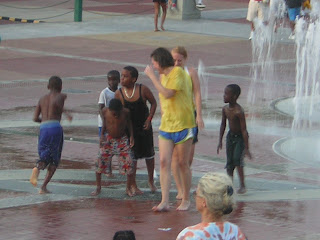 twice, and each pair had to walk (not run) through each of the five rings. The person not walking through the fountain would take pictures with my horrible camera that had a five second delay and took terrible pictures, few of which turned out.

Who makes up rules for running through a fountain? We're lame.


I should've guessed by the children wearing just bathing suits who had come there seeking relief from the dog days of summer that the potential for getting soaked was high. It's why Emily and I didn't change out of our workout clothes and why Mo was wearing a t-shirt and shorts. I didn't quite understand, however, just how completely drenched we would get.


Granted, we could've avoided it, by timing the bursts of water and only running to the next ring afer they went off. But what's the fun in that?

On our last run, Mo even ordered me to stand over one of the water jets until it went off and I was completely drenched. This decision helped turn, "running through the Fountain of Rings," into a Tuesday afternoon wet t-shirt contest for all of downtown Atlanta. Seriously. It was embarrassing. And no, I do not have pictures of that, dirtbags. 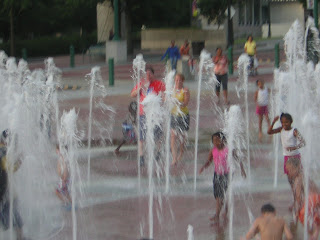 Before we left the park (to get towels at Mo's house), we took one last look at the group of kids still playing and saw some funny stuff. Lots of pushing, lots of standing over the water and getting sprayed directly in the face, and one girl who was doing some pretty provacative dance moves that she probably saw in a rap video.

I hate to be a downer, but watching the little kids splash though the fountain was way more entertaining than doing it myself. I think this might be one of the few activities not suitable for adults.

But alcoholic milkshakes, on the other hand, I'm definitely young enough (and old enough) for that.
Posted by Stephanie Gallman at 7:25 PM