Day 300. A truly momentous day! Or at least, like Days 100 and 200, one that I thought would be full of big activity. There was absolutely no reason why it shouldn't have been, since Day 300 fell on a Saturday; even work couldn't get in the way.
I begged for help with this day, trying to organize a white water rafting trip or a hang gliding excursion. But I couldn't get any takers. My friends either had plans, weren't interested in any of those activities, or were, by Day 300, over the blog and helping me try new things. Increasingly aware that I'd be solo on the big day, I asked for suggestions from you, the blog readers. 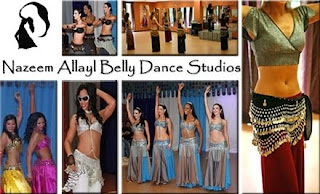 There were some good ones: flotation therapy (unfortunately NOT available in Atlanta), pre-qualify for a home loan (I'd actually done this before), write 5 blogs in one day (that coming from my mother, who was desperate for me to catch up on writing), sing to a nursing home (great idea, if I was a good singer, but as we all saw on Day 242, I am not, so singing just seemed cruel to the old folks).
I went rogue, ignored everyone's suggestions, and went out on my own. Day 300's thing I've never done before was to take a belly dancing class.
Once I had a plan, (a less expensive, not very much commitment involved plan), I asked others to come along, but for various reasons no one was able to. All of their excuses seemed believable, but I had to wonder if they chose not to come because belly dancing sounded weird and not at all how anyone wanted to spend their Saturday. Regardless, I was on my own.

I headed over to the Nazeem Allayl Bellydance Studio in Little 5 Points, stopping first at Chevron to pick up a bottle of water. I wasn't really expecting the class to be terribly strenuous, but I decided it better to be safe than sorry. And I was thirsty.

When I took my water to the counter to purchase, the guy behind the counter paid me a compliment.

"I love your hair," he said.
I was looking down at my money when he said it, but since I'd already noticed I was the only one in the store, I assumed he was talking to me. When I looked up to say, "Thanks," I saw that his hair was exactly the same color as mine.

I smiled, and thanked him.
"You know in another 40 years we're going to be extinct," he said, as if that was information I probably already knew.

"I'm sorry?," I said, still fumbling with my change, and now feeling terribly confused and kind of creeped out.

He went on to explain that when he said, "we," he meant, "redheads," and he referenced an article that he read explaining that scientists had proven that the redhead gene was dying out. Less than two percent of the world's population has red hair right now, and in less than 100 years, we will cease to exist.

This was a lot of information at 10am. This was a lot of information, period. And though I appreciated the trivia, I couldn't fake caring about possible redhead extinction despite the clear evidence that this news was obviously upsetting him. I simply nodded and smiled as he kept going on about what a crying shame it would be if gingers like us weren't around anymore. He even showed me pictures of his kids, as if to say, "I'm doing my part!"; one was a brunette, the other, a redhead. Both kids were cute, but I found myself drawn to the brunette, only because I wasn't confident that his dad loved him as much as he did the redheaded child.
Then, when he could tell I was ready to leave, he gave me a wink and said, "So, you and I need to get out there and make some babies."

Though I'm pretty sure he didn't mean he wanted us to make babies with each other, this guy had taken this conversation one sentence too far. I grabbed my water and said the first thing that came to me.
"You got it!," I said, as if I was on my way out the door to procreate with the first person I could find.

I don't know why I said that. Since then, I thought of all the things I could've said at that moment, and though, "You got it!" was a strange response, nothing quite seems appropriate when a complete stranger has urged me to make babies to keep my hair color going.
Later that day, I did some research. Remarkably, the Chevron guy was not completely crazy. There was a National Geographic article written by scientists who said gingers could be gone by year 2060. But another article written a month later by a different group of scientists that said it wasn't true. I'll be 80 in 2060, and I'll be 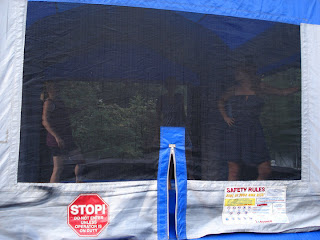 sure to let you know how it turns out.
After thanking him for the water, and the strange information, I hurried out the door and headed to the belly dancing class.
I parked my car and entered the studio, paying just $10 for the class. I noticed that everyone there was either barefoot or wearing socks, so I slipped off my shoes and put them in one of the cubbies on the wall, and secured a place to stand in the back.
The teacher was petite, and she had super long dark hair. Her pants were long and flowy and swung when she walked. She was extremely nice, and had a pleasant, but strange look on her face. Almost like she was stoned or something. I realize the phrase, "head in the clouds," is just a figure of speech, but it was as if her head was literally in the clouds.
She wore a short, tight t-shirt that showed her stomach, which was not the washboard, flat stomach I've seen on other fitness instructors. Belly dancing, I later read, is all about accepting the curves of a woman's body; judging by the pictures on the wall and the movements we learned, there is a sensuality involved that exists regardless of the dancer's size. Unfortunately, I never achieved this sensuality, but I had a hell of a time trying.
The instructor climbed up on a box in the front of the room and put some music on and we began the warm up. I used the time as an opportunity to take a look at the other students in the class and I could immediately tell which ones had taken these classes before. They were the ones wearing the super annoying coins around their waists that jingled and jangled with every single move that they made. You know how babies learning how to walk have little bells on their shoes and it's so cute? Well this was kind of like that, only on grown women trying to get their groove back. Eventually I got used to the constant sound of loose change, but it was a lot to take at first. 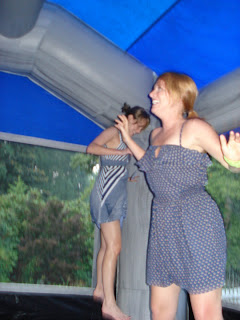 ear in my day, but there was one woman wearing one of the oddest ensembles I'd ever seen. She was herself a strange-looking person, with bright red lipstick and short black spiky hair. Her outfit was a one piece cat suit with tight chiffon sleeves and a chiffon back that dipped so low, when her coin skirt that she had tied around her waist fell off (which was often), I could see the top of her butt crack. I tried not to look, but how was I not supposed to look at that?

This woman's crack was distracting, but more distracting than that for me was that the moves never quite went with the music that was playing. I don't know if that was my teacher screwing up, or if she viewed music as simply background noise or if belly dancing doesn't require listening to music at all, but it really bothered me that our moves were almost never on beat.
After completing the warm up, we moved on to a series of belly dancing moves. For the most part, my feet stayed planted on the floor in first position (heels together, toes apart) and required only movement from my waist. Aside from a few step touches, and toe taps (still moving the belly) that was it. The class was like one continuous body roll.

There were times when just the repetition of the movement was tiring and therefore challenging, but I barely broke a sweat in the class and didn't really even feel like I raised my heart rate all that much. I don't know if that is standard for belly dancing, or if my stoned teacher was just unaware.

The one time she told us to shake our legs and stomachs uncontrollably, she shouted, "You want everything to jiggle!"

I paused for a moment looking around at my classmates to see if they were as alarmed by these words as I was.

I couldn't help but think to myself, "Noooooooooooooo, I don't waaaaaaaaaant anything to jiggle! That's why I'm here! To make the stuff that jiggles stop jiggling!"

The class ended the same way I would imagine all belly dancing classes to end: with doing football drills and Soul Train lines from side of the room to the other with Boyz II Men's, "Motown Philly" blaring through the speakers.

I left feeling pretty proud of myself for going solo, pretty sure that I'm going to leave belly dancing to the professionals, and really sorry that I didn't ask anyone to take my picture while I was there.
Later that afternoon, I went to 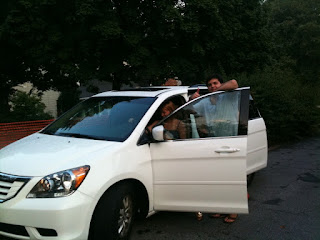 my friend Greg's son's 2nd birthday party. I knew it would be a fun time and a good chance to catch up with friends I had not seen in a while. I did not know that there was going to be a jump castle there, and Jessica (Greg's wife) didn't know, when she paid for it, that none of the children would be interested in it at all. The nice, generous friend that I am, wanting to see Greg and Jessica get their money's worth, I climbed inside and took a turn. My friend Karen joined me. And soon Jessica did too. And thanks to an afternoon summer thunderstorm, the jump castle was more like a slip and slide. We definitely weren't showing our "sensual" side like I had tried to do earlier in belly dancing class, but jump castles are so much more fun. So are child's birthday parties with cake and beer (and barbecue made on a Green Egg with homemade sauce.)
I also had fun touring Greg and Jessica's new mini-van. That's right, I said, "mini-van." And that's my friends Greg and Jessica who own one. I've long accepted that we are not kids anymore, and my friends having kids of their own doesn't freak me out at all the way it used to. But family cars? That's a new one for me. And it does slightly freak me out.

Day 300 didn't set out to be a terribly momentous day, but when I think about all that happened and all I learned, I can't help but be overwhelmed: i found out redheads are going extinct, I saw some girl's butt crack, I hate belly dancing but jump castles rule, and my friend Greg owns a mini-van.
What a weird day.
Posted by Stephanie Gallman at 4:00 PM