When I went to the pumpkin patch with my friend Trish, I bought a pumpkin in preparation for this day's task. An old high school friend who reads the blog had suggested this challenge, and I accepted, making Day 29's thing I've never done before to make a pumpkin pie from a real pumpkin.

I've made pumpkin pie before, from canned pumpkin, several Thanksgivings ago, but I liked the idea of doing it the hard way, and I thanked my friend Amy who suggested it. Seasonal, challenging, and potentially tasty. A true winner.

Because I knew that I would be cutting into the pumpkin and cooking with it, when I was at the pumpkin patch, I thoughtfully chose an oddly shaped, ugly pumpkin and left all of the nice, round, deep orange pumpkins for families wanting to carve and display theirs on their front steps. 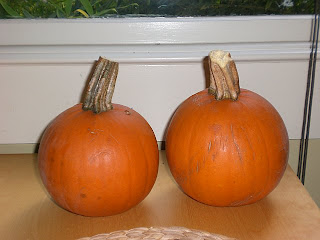 After reading recipes online, however, I soon discovered that the pumpkin I chose was far too big, and likely not sweet enough for pie. It turns out there is a special breed of pumpkins, sugar pumpkins, specifically for cooking. This was a couple of weeks ago, but there is still an over-sized misshaped pumpkin rolling around in the trunk of my car.

Before choosing my recipe, I also assumed that the pumpkin used for the pie filling was the gunk in the middle attached to the seeds that is cleaned out for carving. Wrong again. It's actually the part between the skin and the "guts" that makes the pumpkin.

I hadn't even started the cooking process, and I've already been really wrong about two major parts of this assignment. I was not feeling confident. Furthermore, the recipe called for 4 cups of pumpkin. Am I supposed to know how many cups of pumpkin one sugar pumpkin will yield? Are people born knowing these things? My mom used to be a home economics teacher and I would like to think that if anyone should be born knowing such facts, it would be me, her daughter. But I had no idea how many pumpkins to buy to pull this off.

The execution of this task happened in two parts. Part one happened in my own kitchen and involved gutting and roasting the pumpkins. For the second part, my friend Katy offered to let me use her kitchen and all of her fancy tools and appliances for the pie assembly and baking. On top of that, she also offered to cook dinner for another friend and me. Both extremely generous offers that I'm confident Katy regretted later that evening.

At my house, alone with the pumpkins, I realized just how long it had been since I'd carved a pumpkin. I'm not sure I'd ever actually done it as an adult. I also realized how pitiful my knife selection is and proceeded to hack into this pumpkin alternating between a butter knife and an over sized vegetable peeler. It wasn't pretty, but eventually it got the job done. 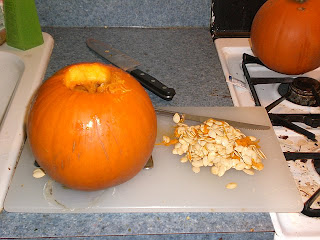 I decided while gutting the pumpkins that I would save the seeds for roasting because though I hadn't eaten them since I was a kid, I do remember enjoying them. Plus when I told everyone that making the pie from a real pumpkin was this day's challenge, that's what they all asked me, wide-eyed with excitement, "Are you gonna roast the seeds?! Oh I LOVE roasted pumpkin seeds!! YUM!!"

I didn't have the heart to tell them that I hadn't planned on it. So I did.

The gutting of the pumpkins was no surprise, a complete mess. There was, and still is, pumpkin everywhere. On my hands, in my hair, on my clothes, on the walls, on the floor...you get the idea. Gross. I did save the seeds though, have no fear! 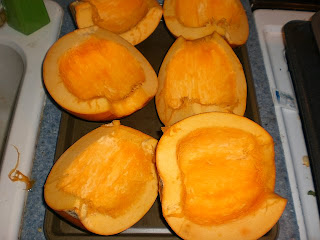 Because I was roasting the entire pumpkin, cleaning it out was much easier than had I been carving it for display. Instead of cutting a small hole at the top and reaching my hand inside to clean out whatever I could reach, I cut those suckers wide open and went to town.

And then it was time to roast them. I put them on a cookie sheet (I actually have one of those) and put them in the oven at 375 degrees. I had no idea how long such a task would take, but the plan was to roast the pumpkin and then pack it up and take it over to Katy's for the mixing, assembly, and of course, dinner.

So that's what I did, but not before nearly burning my fingers off trying to remove the warm pumpkin flesh from the skin and then pack it into every available piece of Tupperware I own. Remember when I said before I wasn't sure how many cups of pumpkin one sugar pumpkin would make? I still don't know, but two sugar pumpkins was far too many. I think I could've succeeded making a pie with a third of one pumpkin. Once again, there was pumpkin everywhere.

By the time I got to Katy's, I was sweating. Sweating from the pumpkin roasting, sweating because she had her oven turned on to cook the chicken and sweating because I was not confident that any of this was going to work. I set up shop in the corner of her kitchen and began stuffing the the warm, roasted, but still somewhat firm pumpkin into a blender. The recipe said "use a food processor or a blender to blend the pumpkin." It did NOT say, "a food processor is really the only way you're going to pull this off without giving yourself and those around you huge amounts of anxiety." I thought the blender would work to break up the pumpkin and give me the consistency I needed. I was wrong.

Less than ten minutes later, while fighting with the blender, I knocked the wine glass over, breaking it and causing wine to spill all over Katy's counter and some of the pumpkin. This little project was already taking far more time than I wanted to spend on it, and now I had to take a time out to clean up the huge mess that I just made. I was annoyed. And still sweating.

The moral of the story here: I did not cook the pumpkin long enough, forcing my dinner companions and I to take turns pressing every single button on the blender to try and get some movement between the blades and the pumpkin. Soon enough, we were all sweating. But there was minimal progress, and we began scooping and measuring the pumpkin. On our way to four cups.

While I was in the corner of the kitchen freaking about the pie and the spilled wine, there was still a very elaborate dinner being prepared just feet from me. Katy had prepared a chicken with lemon and herbs that smelled delicious. There was also a salad with homemade dressing and some of my favorite things: walnuts, goat cheese and dried cranberries. And then there was a platter full of sweet potatoes, cut into fries and baked with olive oil and rosemary. If you've been around this blog long enough you know that there are only two foods that I can't stand: sweet potatoes and beets.

Still, these orange sticks looked tasty, and Lauren and Katy couldn't stop eating them and commenting on how good they are. Dare I try sweet potatoes again?

I went for it.

I was not disappointed. That's right, amid the pumpkin pie insanity, I found a sweet potato that did not disgust me. A thinly sliced, slathered in olive oil and rosemary, sweet potato. Even if the pies were a disaster, and all evidence was leading me to think that they would be, I would at least count this day a success because of the sweet potatoes.

Miraculously we (and it was a group effort at this point) were able to get the pie filling incorporated and put into three pie crusts. That's right, with plenty of pumpkin to spare, the two sugar pumpkins made enough filling for THREE pies. Katy took the rest of the pumpkin that was leftover and made soup out of it. Amazing. 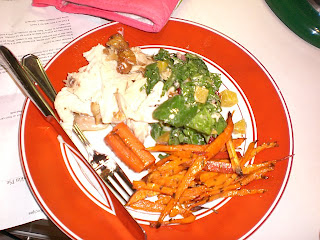 While the pies baked, we sat down to the delicious dinner that she had prepared. Baking pies definitely kick-started my appetite. I was starving. And everything was delicious. The chicken...the salad...the sweet potatoes.

Suddenly I noticed Lauren and Katy were looking at each other and then they looked at me. "Do you like that salad, Steph?" one of them asked me.

"Well that's interesting," Lauren said, "because it has beets in it!"

Wha??? I was tricked! They put yellow beets in the salad.

Lauren had threatened to force me to like beets when she came in from out of town, but I didn't think she'd actually pull it off. But she was right, beets with goat cheese and walnuts is pretty damn good. Could it be that now there is not a food out there that I don't like? Perhaps yes, when made in Katy's kitchen, with enough dressing and oil to disguise how they really taste.
So with this news, even if the pies didn't bake or wouldn't set, I was still going to make it through the day having done something I've never done before. I learned to like beets! And sweet potatoes!

After finishing the delicious meal, it was time to return our attention to the pies. I held my breath as Katy opened the oven. We were all stunned to see that they were actually setting! Still not ready, even though they had been in there for 45 minutes. We put them back in the oven. And we waited.

And waited. Fifteen more minutes. Still not done.
Lauren and Katy finished a movie they had been watching. I might've taken a nap or played Brickbeaker on my Blackberry.
And then we waited some more. 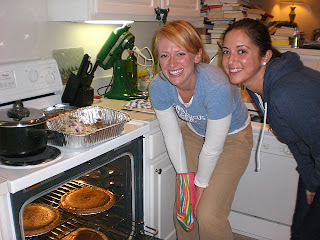 Finally, when we could not take anymore, we took the pies out. They were done, or as done as they would ever be. I was done. But I baked a pumpkin pie (three of them) from a real pumpkin!
Because they stayed in the oven for close to two hours, the crust on the pies was beyond dry. But the filling was good. It tasted like pumpkin pie.
Lauren and Katy agreed. They said the pies were good. But they are nice people and they weren't going to tell me they were bad, especially since they contributed their muscle and sweat (literally) to the process. The true test would be my co-workers the next day. On the other hand, I've seen my co-workers eat day-old pizza that sat out overnight because it was a.) free and b.) there, so maybe there willingness to eat the pie was simply because they could reach it. Like cheese and chocolate, Cool Whip seems to make everything taste better, so I was sure to pick up plenty and serve it with the pie. This trick seemed to work, too because everyone ate it, and said they liked it.

Still, pumpkin is a pain in my ass. Real pumpkin anyway. And as far as I can tell there is absolutely no advantage of using real pumpkin as opposed to canned. I found out later that week on vacation that my pal Julie at http://www.julieversusvegetables.wordpress.com/ was also tackling pumpkins, but she went for canned pumpkin. She also made pumpkin crisp and not pie. No dried out crust there. Smart move, Julie. Well done.
Posted by Stephanie Gallman at 8:25 AM