The first day of traveling with Mountain Man and California Kevin (CK) had been, in my opinion, a huge success. Everyone got along, there weren't too many unnecessary bathroom breaks (yeah me) and the conversation was flowing for most of the nine hour trip from Palm Springs to El Portal. Amazing all the things that I can talk about with an audience who had never heard my material before. Once we got to CK's house, however, we crashed. A full weekend of Phish had caught up to all of us and we were done.
I woke up in Yosemite completely in awe of the scenery around me. A far cry from the smog of Atlanta, looking out CK's living room window was like looking at a Bob Ross painting (happy trees and happy stream and happy mountains). Neither Mountain Man nor I had ever been to Yosemite, so we were both ready to see and do new things. Day 38's thing I have never done before: tour Yosemite National Park with a local. 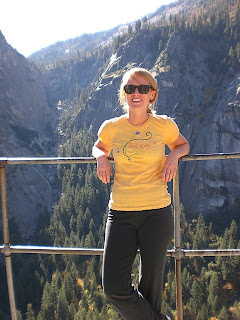 It did not take long for me to understand that CK was a pretty hard core outdoorsman. On the road trip we learned he had spent a large portion of his summer vacation camping in Alaska. Knowing this about him made me a little nervous to see what kind of activities he had planned for us. Mountain Man told me privately that he'd told CK to keep our hikes at the beginner level, since we were travelling and wouldn't be packing hiking gear. I did not have the heart to tell Mountain Man that I don't actually own real hiking gear. I've asked before, but I'll ask again, "Isn't hiking just walking on an incline?"

I may not have had "gear," but I did have running shoes and workout clothes. Oh, and a Patagonia fleece and a Marmot hip pack (hip pack = fanny pack with cool outdoor company logo on it). Bring it, Yosemite. I can look the part.

CK works for the Yosemite Institute, an organization that leads environmental education programs for school groups. He took the week off to hang out with us, but I wonder if he felt like he was still working because Mountain Man and I were hanging on his every word like students on one of his field trips. We asked questions about everything. 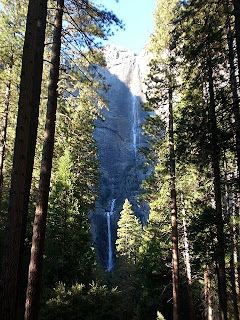 CK has lived in Yosemite for five years and knows a great deal about the geology, geography and ecology of the park. He is also patient, soft-spoken and easy-going, all great qualities for a tour guide. CK could've told me that the sun only shines five days out of the year in Yosemite and I would've believed him. But he didn't. He shared a wealth of knowledge, of which I remember about five percent. I hope that the kids he teaches do better than me.

CK first took us to Sierra Point, an unmarked hike. It used to be a trail, but a rockslide forced it's closure in the 1970s. One minute we were cruising along the paved walkway with all of the other tourists, and the next thing I know, ascending up rocks that didn't seem to go anywhere. Just the three of us. For the most part I was fine. I kept up with the boys and I didn't fall. There were times when the openness or steepness freaked me out, but I kept reminding myself, "This is just a walk, this is just a walk."

Only it's not just a walk. Here's what one website says about Sierra Point: "This hike should not be attempted by beginning hikers due to the difficulty of the missing portions of the trail. In fact, the National Park Service does not recommend that anyone take this trail."

Hiking is NOT just walking on an incline. Hiking is serious. I'm a hiker.

The view from Sierra Point was well worth the risk (easy for me to say now that I'm safe at sea level). We could see four waterfalls and CK used Mountain Man as a map to show us some of the other Yosemite highlights.

After lunch, we walked to the base of Yosemite Falls and sat for a bit watching the water hit the rocks. On our way back, we ran into some of CK's co-workers leading groups of kids from what he says is the ultimate destination of their trip, Spider Cave.

Whenever I think of caves, which is rarely, I think of them as I've seen them in movies. A damp, dark room with a low-ceiling that's accessible on foot by an archway style opening in the rock. This cave was nothing like that.

In fact, I had no idea we were getting ready to go through Spider Cave until CK was already inside and calling out for someone to follow him. He stepped down into an opening no more than three feet wide and within seconds I couldn't see him anymore. 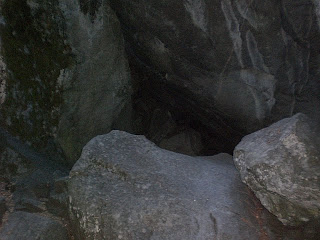 I could hear his voice, though, and he was giving me instructions on how to follow him into the cave. That is how the experience was meant to go. I would listen to his instructions, do what he said, and then turn around and give the same instructions to Mountain Man. CK said this was a team-building exercise. Go Team!

CK would tap the walls of the cave and say something to me like, "Hold your left hand out and you can feel that the cave is going to take a bit of a turn to the right. Leave your hand there for support and bring your left foot down about two feet and you'll feel the ground. Be careful though because the walls are going to get pretty narrow."

It was then my job to repeat those directions to Mountain Man. Only mine came out like this: "It's tricky here. Put your foot down carefully. Good luck."

Poor Mountain Man quickly learned that he was on his own in this dark cave.

Dark may be an understatement. I mean pitch-black. I couldn't see my hand in front of my face. CK assured us there were no spiders in Spider Cave, but honestly if there were, I wouldn't have ever known. I couldn't see anything. 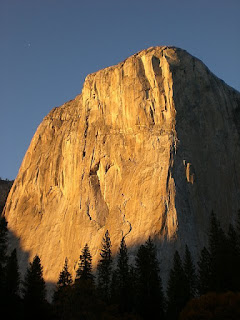 The craziest part of the cave came at about a third of the way in when the cave became so narrow that we literally had to lie on our backs and turn slightly to the left to squirm through. CK said they call this part of the cave the "birth canal" and though not pleasant to think about, I completely understand why.

Once we got to the end of the cave and were about to exit, CK stopped and said, in his best Yosemite guide voice, that this was the part of the trip where we talk about our feelings.

I said in my best eighth-grade voice, "This experience wasn't what I was expecting at all, but I thought it was awesome. I really felt like we communicated well and all learned to trust each other. However, I could've done without Mountain Man playing grab-ass the entire time in the dark."

Mountain Man said, "This was not what I was expecting either, and I almost lost it a few times back there. Oh, and Stephanie gives horrible directions." 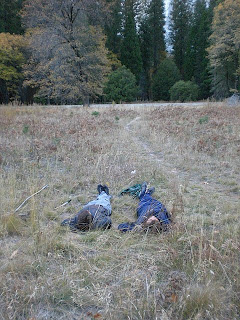 Clearly I made the right move electing to go first behind CK. I felt at ease with his expertise and explicit instructions. Mountain Man, on the other hand, was forced to go at it, with only me to help guide him. No wonder he had a mild freakout going through the birth canal. Before we climbed out of the cave, CK said usually for his school kids, he'll turn his head lamp on so they can see what they navigated through. Unfortunately he didn't have his lamp with him that day, so we have no idea what the space looked like.

Since I've returned, I tried to look up Spider Cave/Yosemite on the Internet to see if there is any picture of it, and so far, I haven't been able to find one. In fact, most of the entries about Spider Cave are from people who have heard about it but can't figure out how to find it. Like Sierra Point, Spider Cave is also something only the locals know about. Maybe it's the elitist in me, but I think this is so cool.

We finished the day watching the sunset in a meadow at the base of El Capitan (Mountain Man and CK engaging in some serious man talk and I engaged in a stare down with a deer). Then we headed back to CK's house for some homemade pizzas and microbrews. This Tuesday couldn't have been more different from any other normal Tuesday in my house. And I couldn't have loved it more.
Posted by Stephanie Gallman at 10:54 PM