Day 35: You Can Be the Strawberry

In preparation for Festival 8, there were massive amounts of emails circulating among Team Temecula about what everyone would dress up as for Halloween. I've mentioned before that I'm not a huge Halloween fan, and can count on one hand how many times I've dressed up as an adult. But I'm no party pooper, so I decided to play along and make Day 35's thing I've never done before, whether I wanted to or not, to participate in a group Halloween costume.
When I signed on for the trip, I sent Melanie an email: "Hey, what are we thinking about doing for costumes?" I suggested the Royal Tenenbaums cast. I was quickly shot down.
"We've already decided," she responded, "We're going as Ms. Pac-Man, the video game." 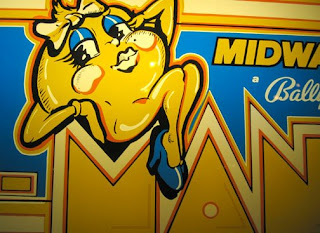 My mind went blank. There are characters in the video game? Wasn't it just Ms. Pac-Man eating some dots?
A quick Google search refreshed my memory and I remembered that yes, indeed, there were other characters in the video game. In addition to not really participating in Halloween activities, I also didn't spend a whole lot of time in arcades growing up.
Melanie and I's conversation continued. "So far, we have four ghosts (Randy, David, Zach and Jackie), a Power Pill (Joe), a Pretzel (Fais), Cherries (Laura and Julie--from http://www.julieversusvegetables.wordpress.com/-- Julie likes to dress up like produce, she just doesn't like to eat it) and I'm Ms. Pac-Man."
"Ok...so is there anything else you need?" I asked, not quite sure I wanted to know her response.
"Why don't you be the strawberry?"
A strawberry? That's not so bad. I'm a strawberry blonde, so it makes sense. A red dress, a green headband, some drawn on freckles for the seeds. Done.
I was curious to see if an actual strawberry costume existed. So I Googled "adult strawberry costume." Sure enough, there were several "strawberry-ish" costumes. Strawberry Shortcake, strawberry doll (what?), strawberry daiquiri. 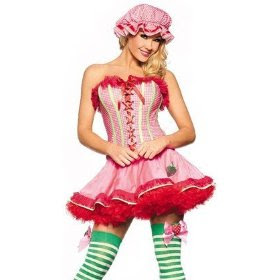 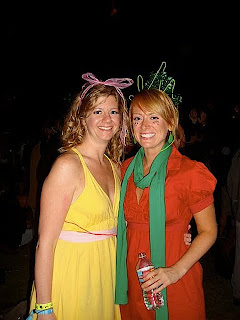 That's right, the fruit would wear white go-go boots and Ms. Pac-Man would wear pink ones. A short red dress and go-go boots and apparently even fruit can be risque.
I also learned in the email chatter that the reason the group decided to be the Ms. Pac-Man cast was chosen was because Randy wanted to have a costume that lit up. So there was a lot of discussion about ordering lights to attach to costumes. In fact, there is a website dedicated to helping us achieve our goal: http://www.flashyblinkylights.com/. Best. Website. Ever.

Honestly, I wasn't 100 percent on board with making fruit sexy, but making the costumes light up? Sold! 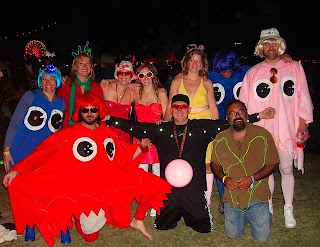 Right before I left for the trip, I had a friend in town and several busy days at work, so I put off shopping for this costume until the weekend before. But I wasn't concerned. It's a red dress. How hard could it be? And then I went out and actually tried to find one. And couldn't.
I started at American Apparel where I found an array of red dresses in a multitude of styles...that would all fit my Barbie. Interesting that the mecca for hipsters makes clothes for women without hips.

And then, as if I was still a child in need of a costume, my mom called and told me she found, and bought a red dress that looked like a strawberry. She continued to give me a five minute detailed explanation of what the dress looked like, stitch by stitch. It gave me a headache. I finally told her to put it in the mail and I would give it a try.

The night of Halloween finally arrived and after all of the stress and the search for the red dress, my costume came together. The group execution was a success. At least I thought it was. Until some guy dressed up like a monkey asked me if I was the Statue of Liberty.
"What? I'm a strawberry." 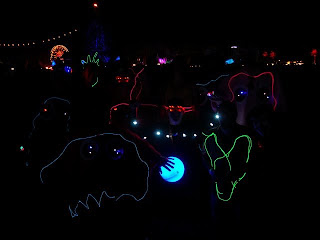 "I thought you were a Christmas tree," someone else piped in.
Looking at pictures, I can kinda see what they both meant. My light-up "stem" did look like the crown on the Statue of Liberty. And it was dark out there. Maybe they thought my red dress was green. Or maybe they had a few too many beers and/or psychedelic drugs.
No surprise, Team Temecula rocked Halloween as Ms. Pac-Man.
And I rocked it my first time a part of a group Halloween costume as a Strawberry/Statue of Liberty/Christmas tree.
Posted by Stephanie Gallman at 9:07 AM