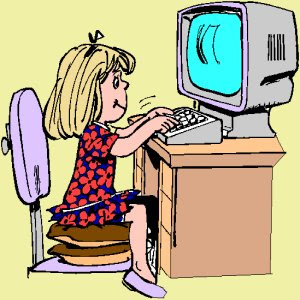 Day 27 was one of those days AND it had a theme, all focusing on computers.

Computer day got kicked off on accident when a co-worker rocked my world with some keyboard tricks. She saw my over reliance on the mouse and asked me if I ever used my keyboard to copy, cut and paste.

"No," I said reluctantly, embarrassed and mad at Mrs. Sligh for not teaching me such skills in my typing class at Irmo Middle School.

Katy then proceeded to show me how to hit Control and 'C' to copy, Control and 'X' to cut, and Control and 'V' to paste. My world will never be the same.
Since I met her two years ago, Katy has been shocked and amused by the fact that my non-work email account is set up through Hotmail. Every time she wants to send me something and asks for my address, she'll laugh when I respond, shake her head, and say, "I ALWAYS forget that you have Hotmail! Ha!" In my opinion, she is a little too amused. I mean, is Hotmail THAT BAD? It's an email server. I open my mail, read it, close it and move about my day.

I do agree that after having the Hotmail account for ten years and using it for nearly every log-in that I have, the spam has gotten a little out of control. But I don't think that's Hotmail's fault, and I'm convinced any account with any server would produce the same amount of junk mail.

So what's the big deal about Gmail? Katy's certainly not the only one who thinks I'm behind the times. I know several Gmail converts that constantly tell me how awesome it is and how far superior it is to all other email servers. All these Google devotees need to stop ridiculing me and take a good look at themselves, in my opinion. Tell me, why the obsession with Gmail? It's just email!

I feel like I'm on the verge of falling prey to the Apple world, but if I ever look at someone using a PC, throw my head back and laugh evilly at how sad and pathetic they are for not having switched over to a Mac, I give you permission to punch me in the face. Same goes for putting an Apple sticker on my car. Run me over with the car if I ever do that.

Anyway, I decided to see what all the fuss is about with Gmail. With all of the glowing recommendations and outright criticism of other email servers, I fully expected for my life to change upon joining. So I signed up, picked my username and began to navigate.

Gmail is nice. So is Hotmail.

So, I have a Gmail account. No one is actually aware of the account because until now, I hadn't really told anyone about it. I'm still a Hotmailer, until having the sun rise and set on my inbox becomes a priority to me. Right now, it's not. If I change my mind, however, and decide to fully embrace Gmail, I promise not to ever judge all of you Aol'ers, Yahoo'ers or my fellow Hotmailers.

Last on my list of computer fun was creating a fan page for "Project 29 to 30." Many of you already know about this one because you've already been suckered in to join. As if I didn't love this blog enough, now I'm asking everyone to express their love for it as well. 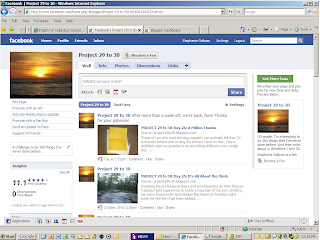 The fan page was suggested to me by a friend back when I started the blog, but it took me until now to fully understand what a fan page is for and how to set one up. A fan page, I learned, is that tricky "notification" that gets you all excited because you think some hot guy from your past just found you and wants to be your friend or that some book publisher just read your blog and wants to make a deal. But no, it's just some loser that wants you to become a fan of his band or start-up company or Sunny Days. "Sunny Days," as in, days when the sun shines. Whoever took the time to set this one up needs to get off facebook and get some fresh air.

Anyway, so now I'm that loser who made a fan page. For herself. On a Friday night. Alone. And then it was time to solicit fans.

I was freaking because I couldn't figure out if I should ask all 655 of my friends to be fans or not. I mean, we all know now how much I want people to read this blog, and how anxious I think people aren't. But I get annoyed when people ask me to become fans of their pages. I cannot tell you how many times I've hit "Ignore" only to be asked a month later to become a fan again. How many people did I want to bother and what circles of friends could I stand to bother the most? In the end, I hit up most of my Georgia and South Carolina network friends, but I feel like another round of "Become a Fan of Project 29 to 30" is coming, so watch out.

I thought that because I was asking others to become fans of my page, that it would only be appropriate to become a fan of the page myself. Sort of like when you cook something fattening for someone. It makes them feel better about eating it if you go ahead and take a bite first.

To all 234 of you that clicked "Become a Fan!" and not "Ignore," thank you! I can't say I would've done the same, but I really appreciate you. And so does my anxiety.
Posted by Stephanie Gallman at 6:34 PM