For the first time in my adult life, this blog has forced me to participate in seasonal activities that I had never done before. And I love it. That's not to say I loved all of the activities (corn maze = lame), but I'm glad I am embracing each holiday and not letting them just pass me by. When people say, "Can you believe it's already Thanksgiving?" I will now respond, "well, yes, actually, I can." 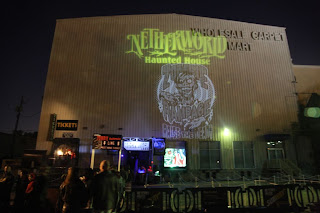 There was just one task left to complete ahead of Halloween and it was the one I dreaded the most. Luckily for me, I had full blog support from Lauren and Katy who were willing to help me complete Day 31's thing I've never done before: go to a Haunted House.

I'm really not much of a Halloween fan. When my brother and I were kids we always carved pumpkins, dressed up and went trick-or-treating, but that was really the extent of my family's involvement in the holiday. My dad's birthday is on Halloween, so as soon as we kids allowed it, our family tried to make the day more about his birthday and less about spooky stuff.

When you get down to it, I hate to be scared. I stay away from horror movies and television shows. I find everyday life frightening enough without ghosts, vampires and paranormal activity.
But it was Halloween. Time to get spooked for the sake of the blog.

A simple Internet search pointed me to the direction of several Haunted Houses in the Atlanta area. I chose one, but in my ignorance, quickly found out I had chosen incorrectly.

Netherworld, I was told, was THE Haunted House to go to Atlanta.

But when I told people that I was taking my out-of-town friend there, I was met with a lot of raised eyebrows and a lot of "Whoa...really? Have you been before?"

And I'd imagine that these people have a higher threshold for scary than I do. I knew already 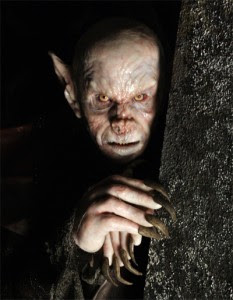 that this was a really bad idea.

The day of the haunted house was a rainy one in Atlanta. Really rainy. I emailed my friends, "Do you think we should do something else? It's raining pretty badly." I'm such a sissy!
"Well, it's indoors, right? We'll be fine," Katy responded.
Crap.

On my way out the door, my friends at work who had just gone to Netherworld gave me two pieces of advice, both of which I am forever grateful: the "experience" starts before you actually think it does and it's not over when you think it is.

The entire trip up to Norcross was spent in complete freak mode. All three of us blaming the other for choosing this as today's activity. "I gave you both an out!" I exclaimed, in reference to my email about the weather.
Regardless of who was to blame for this excursion (me), we had to go through with it. It was after 9pm, I had already planned on this being the thing I've never done before and I charged $69 worth of tickets on my credit card. We were going.
We pulled into the packed parking lot with our guards up, fully anticipating for characters to attack us immediately when we got out of the car. Apparently there are a lot of bloggers attempting things they've never done before or people actually like these scary activities. I saw people running, heard people screaming. I had a knot in my stomach. I was truly terrified of what was about to happen.
We tentatively walked up to the ticket counter, encountering a few scary figures along the way. The man selling tickets could see the fear on our faces and said, "oh you girls are gonna be fun."

When he said that, I wondered if there was some sort of communication device that he used to alert all of the actors when complete wusses are about to come through. If so, I think this guy would've used it. He could tell immediately that we were about to jump out of our skin.

I refused to let this get to me and proceeded to the start of the Haunted House ready to attack it. "It's mind over matter," I told myself. I could do this. It is all make believe. None of it is real. I was going to link arms with my friends, be brave and get through this maze with confidence and self-control. I would do what I always do, and internalize any anxiety or fear that I was feeling.

We walked ahead, slowly, but deliberately. And then, as if scripted for a bloopers show, a vampire/ghost/scary thing flew out from the ceiling right over our heads.

And we fell. On the ground.

None of us recalls who fell first, but the fact that we had linked arms so tightly caused a chain reaction. One person went down and we all went down.

Did I mention we were in the first room of the Haunted House? Like ten steps in.

So much for living the fear on the inside. My anxiety was right out there for everyone to see, lying on the floor in the first room of Netherworld. This experience had turned me into one of those excitable, wears-their-emotions-on-their-sleeve kinds of people that I hate. You know the people on game shows that scream, run around and fall on the ground when they win a prize? Or faint when they meet their favorite celebrity? Or shriek into the phone when they win movie passes from a radio station? I despise that behavior and those people.

Yet here I was, on the ground, screaming, gasping, laughing (at the fact that we fell) and truly scared. I also felt strangely and overwhelmingly exhausted.
We peeled ourselves off of the floor and proceeded through room after room of terribleness. Flashing lights, moving floors, eerie sounds and elaborate special effects contributed to the fright. Not to mention the horrifyingly detailed costumes on the characters jumping out at us at every turn.
About mid-way through Netherworld, a group of three other visitors, two large guys and one of their girlfriends, caught up to us. They seemed to be just as freaked out as we were. Our chain of three quickly turned into a mob of six. Complete strangers holding on to each other for dear life.
In fact, these guys were grabbing and touching us in ways that in a normal situation, would be completely inappropriate and unacceptable. But under the circumstances, none of us really cared.
In fact, haunted houses could be the answer to a lot of the world's problems. When you're in that vulnerable place and you're scared, you'll grab onto anyone for comfort.
Marriage on the rocks? Head to Netherworld and you'll find your way back into each other's arms. 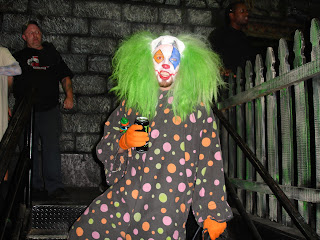 Kids not getting along? Take them to Netherworld and scare them into working it out.

Race relations tense in your community? Take your town to Netherworld. Everyone will quickly realize that when in the dark being chased around by spooky characters in costume, we're all the same.

We (all six of us) ran out of the haunted house and back to our cars. We were all sweating. I had a headache. Sure enough, the experience wasn't over and we were chased briefly by one of the parking lot creatures. Katy, who spent the latter part of the haunted house with her fingers in her ears and her eyes closed, politely, but firmly said to the creature, "Please stop. I've had enough!"

I imagine a "good day at the office" for actors at a haunted house would be to completely terrify their visitors and bring them to their knees. I'm happy that my friends and I were responsible for making their workday a success.

***Editor's Note: unfortunately there are no pictures to document this horrifying experience or the bruises incurred as a result. These images are taken from the http://www.fearworld.com/ website.***

Posted by Stephanie Gallman at 9:05 AM