Over the summer I met a guy, who for the sake of the blog I will call Mountain Man. He lives far away from me (in the mountains, get it?), but over time we gradually started talking, emailing and before long, had formed a pretty cool long distance friendship.

As we got to know each other, we discovered that among our many common interests, we were both going to California for the Phish festival. He was meeting some of his friends there to camp, but we made plans to hang out. About a month before the concert, Mountain Man upped the ante, "Hey, after Phish I'm headed up to Yosemite with my friend that lives there. You should come with us."

I considered his invitation. On paper, this was a crazy idea. I barely knew this guy. I couldn't go on vacation with him! On the other hand, he was cool, and Yosemite sounded cool. I had the time off, I was in need of a vacation, and I had never done anything like this before, so the possibilities for the blog were wide open. 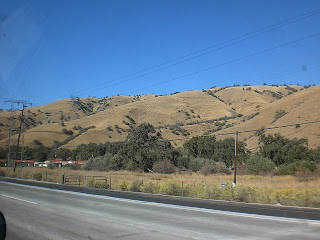 So completely abandoning reason and sanity, I made Day 37’s thing I’ve never done before: go on a vacation with someone I hardly know.

Ok, maybe that's not completely accurate, because I had actually gotten to know Mountain Man pretty well. We just hadn't spent that much time together. And by "that much," I mean, hardly at all. But for whatever reason, I wasn't really nervous at all. I was nervous, however, to tell anyone about it.

In fact, I shared the details of this trip with so few people before taking it, there is probably a good chance that some of you are finding out about it for the first time right now. I have been accused since returning of being secretive and downright shady. I cannot deny either of those accusations.

I decided for fear that something terrible would happen and my parents would have no idea where I was, that I had to fill them in on my post-Phish travels, albeit as generically as possible.

Then I had to decide which parent to tell. When it comes to family, I choose carefully who I talk to about certain subjects. Mom takes the friends/boys/emotional girly stuff and Dad takes the career/sports/money stuff.

Under these guidelines, mom was the obvious choice. I was concerned, however, as she can sometimes, without even realizing it, be a downer. I was excited, but I needed her support. Any bit of negativity could've sent me over the edge.

She called, and I went for it, trying not to let my own uncertainty about the trip to come through in our conversation.

“So…remember that guy from the Northeast that I had told you about? Well he’s going to Phish too, and I think we might extend our vacation and head up to Yosemite with a friend of his that lives there,” I told her on the phone hurriedly.

And then I waited for the aftermath, completely expecting her complete disapproval with such an insane idea. “You don’t even know this guy! Are you crazy?! I completely forbid this trip.”

This is not how it went down.

Whaaa? No disappointment? No forbidding me to go? The only thing that I ever got in trouble for in high school was being a bitch and talking back; I was kind of hoping this was going to be my chance to let her down with my complete irresponsibility. But she wasn’t upset about it all! She was excited for me, excited for the trip. 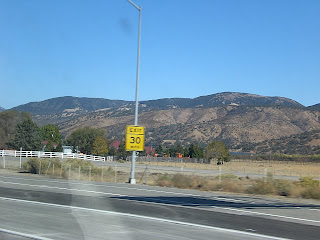 And then she hit me with, “So…this boy…is he a friend or more than a friend? You seem to have a lot of guy friends.”

I did not want to go down this road, so again, I kept it light, “Well, he is my friend. . .(my voice trailed off because while true, that wasn’t exactly the whole story but I didn’t even understand what was going on and I wasn’t about to try and explain it to her).

Luckily she saved the awkward silence with, “Well, can I see a picture of him?”

What? Apparently the idea of her daughter going on an extended trip with a complete stranger/possible weirdo/possible serial killer was easier to take if she could at least see what he looked like.

She must have approved because she told my dad and right before I left, I got an email from him that ended with, "P.S.S. Did your mother tell me you are meeting this dud from the northeast at this concert? Tell him to be careful. I’m watching him!!! "

I think he meant to say "dude." Amazing how one little letter can change a sentence's meaning entirely.

I went back and forth getting really excited and then getting terribly nervous. Mountain Man could sense my fear and the two of us decided that if our time together at Phish was a disaster, I could always go back to San Diego with Team Temecula and catch a flight to San Francisco and continue on my trip as scheduled. No need to stress, I was going to live in the moment, take it one day at a time. Well, at least I was going to try.

Sometimes my mind would go into overdrive and I would start to think about how horribly wrong this exerience could go.

"What if he acts weird when he drinks?" I said to my friend Maribeth days before I was supposed to leave. "I mean, I like what I know of him so far, but what if has a couple of beers and takes his shirt off or acts like a meathead?"

Maribeth laughed, "What if he thinks you act weird when you drink?"'

Team Temecula arrived in Palm Springs and Mountain Man and I were staying in constant communication. Until we weren't.

At some point during the weekend, he decided he was done with his cell phone and chose to leave it at his campsite for the rest of the time. So communication stopped. I guess he assumed we would just "bump into each other" eventually. There were 50,000 people at this festival. I wasn't convinced.

I was confused. And sad, as I had looked forward to hanging out with him. I was also freaked that this extended vacation was about to go up in smoke.

I talked to my parents during the weekend and my mom asked me, "How are things with Mountain Man?"

My mom was instantly worried and felt sorry for me. My dad was less concerned, "He's probably just getting rowdy with his buddies, don't worry about it!"

Those in Team Temecula that knew what was going on had mixed opinions too.

A lot were like my dad and assumed it was no big deal, "It's Phish! He's having a good time, relax!" 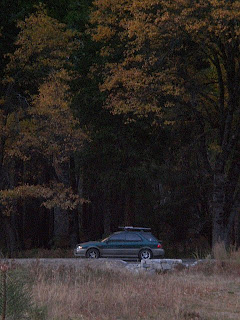 True. This trip was like a mini-high school reunion for him. He's drinking beers and having fun. I don't want to rain on anyone's parade. I just wanted to drink beer and have fun too.

There were those that thought Mountain Man was acting like an ass. "What's his deal? I'll kill him."

I was stuck somewhere in the middle, trying to navigate the reality that there was a good chance I was never going to see this guy. I needed to start figuring out how I was going to get to San Francisco, Boston and eventually back to Atlanta.

Fortunately, I didn't have to sort any of that out. Because early Sunday morning a very guilty Mountain Man called me to apologize. Rowdy boys weekend was just that, apparently: boys weekend. We arranged to meet at the venue and sort it all out. And we did.

Maybe I'm a fool, maybe I really wanted to go to Yosemite, or maybe I didn't want to believe that I made a mistake in going forward with such a crazy plan. Whatever the reason, I decided to accept his apology, which I did believe was sincere, and go forward with the trip.

So Monday morning, Mountain Man and his friends (California Kevin and North Carolina Dave) pulled their dusty Subaru Outback into my plush rental house on a golf course. They'd been camping for four days, eating burritos for most meals and had showered maybe twice the entire time, so I'm sure it was quite a shock to enter a house that looked like it could be in a rap video. Mountain Man knew me, but these guys did not at all, I can only imagine that they're probably thinking, "Who does this chick think she is?" 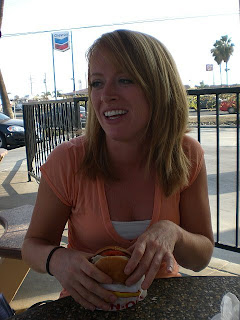 After some drama that involved us getting locked out of the house with all of my stuff inside, a call to the rental house place and finally finding a way back in (thank you North Carolina Dave a.k.a. Macgyver), we loaded up the car and headed on our way. Me, still wary of this dude who had so suddenly fallen off the radar, but excited for the adventure ahead.

Talk about worlds colliding: sorority girl who rents mansions for Phish concerts climbs into Mountain Man and friend's Subaru Outback wearing designer jeans and carrying an oversized suitcase? The comedy wasn't lost on me. And it continued as we made our way to Yosemite.

**Oh, and another thing I did Monday was to eat at an In-and-Out Burger, which despite having lived in California for a summer, was also something I had never done before.**
Posted by Stephanie Gallman at 9:08 AM