After a dramatic and stressful night in Katy's kitchen, I planned on making Monday's task easy. I also planned on making it involve someone else taking my order, cooking for me, and serving me my dinner. Having my friend Lauren in from out of town made this easy to accomplish because she loves eating out in Atlanta, and though I've lived here for five years, there are still so many restaurants that I haven't tried. She is also a fan of the show Top Chef, and to my surprise, Atlanta is full of current and former show contestants owning and working at restaurants here.
Day 30's thing I've never done before was to eat at a Top Chef contestant Richard Blais' restaurant, Flip. 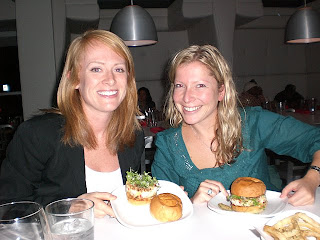 What's funny about the decision to take Lauren to Flip is that I don't really eat hamburgers. I don't really eat a lot of red meat, period. I stopped in the eighth grade because I wanted to be skinny and it was the cool thing to do and I just never started really eating it again. I'm not terribly strict about it, I just don't choose steaks or hamburgers at restaurants or cook with them at home. I did eat a hamburger at a cookout a few years ago, but that because I was trying to impress the guy that had invited me to the cookout. It did not work, and I've regretted that decision since.

But Flip isn't just any normal burger joint. It is a "Burger Boutique," that has, in addition to a wide assortment of beef burgers, burgers made out of salmon, falafel, lamb, crab, turkey. I knew after merely glancing at the menu ahead of our visit there that I would have no problem finding something to eat. "Burger Boutique," also suits Flip because of the restaurant's modern, swanky decor. Big white tables and booths are accompanied by stainless steel chairs and light fixtures. It's as if they are saying, "It may be hamburgers and french fries, but you don't have to eat like you're at McDonald's." I should totally be in advertising.
Regardless of having viewed the menu online (several times), I could not, for the life of me, decide what to order. Everything looked awesome. Plus, I fear food envy the way some people fear spiders or snakes. I'd rather go hungry than wish I had ordered something that someone else at my table ordered. 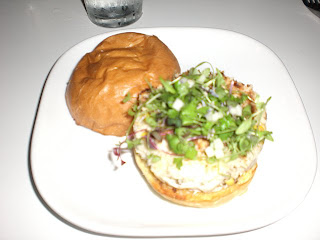 Food envy is real. And it is the worst.
Apparently my friends also have this fear. This poor waiter. First we come in late on a Monday night, and then we ask him to tell us about nearly every burger on the menu. "What about the turkey burger, do you like it?" "If you had to choose between the tuna burger and the lamb burger, what would you choose?" We all mulled over this decision as if our dinner selection was going to save or destroy the free world as we knew it.

When the waiter returned (likely to tell us that the kitchen was closing and we had to decide), Katy picked first, and put her menu down. Then Lauren picked the crab burger that the waiter had highly recommended. Then Katy changed her mind and also chose the crab. When it comes to ordering food at restaurants, I always elect to go last. That way, I can listen to what everyone else is ordering and place my order accordingly. Some call this sneaky, I call it smart.
In this instance, however, it backfired. Lauren and Katy had chosen the crab. Now, I could've gambled at that point, gone out on my own by choosing a different burger and possibly been victorious if my selection was the better of the two. If I chose poorly, however, I'd be forced to live with my decision, alone, while the only other two people at my table enjoy their waiter-recommended crab burger that I also considered. I'm not a gambler, especially when it comes to food, so I opted to go three for three and order the crab. "We're all in this together," I thought, good, bad, and hopefully tasty.

The crab burger consisted of lump crab, green curry coconut sauce, pickled apples and micro greens. The burger, in my opinion was good. I did think there was a little too much bread, and not enough crab or sauce. But overall, I like the concept. Wait, what? Who am I? I'm nobody worthy of critiquing anyone's food, but I know what I like, and while the crab burger was good, it wasn't amazing. And I really wanted it to be.
Since my own visit to Flip, I recently talked to someone else who just went and ate the lamb burger, which was what I had considered ordering instead of the crab. He said it was awesome. It was as if the Food Gods came to taunt me with this information (should've gone out on your own, idiot). 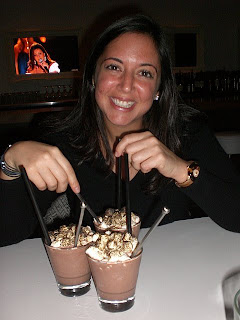 Wanting to get the full experience, when the meal was over, we ordered a milkshake for dessert. Which for the waiter, meant more torture as we went back and forth over which milkshake we should get, the Spicy Chocolate Mole or Nutella and Burnt Marshmallow. Seeing that we were headed nowhere fast, Katy reigned in the discussion and suggested we go with what Lauren wanted since she was in from out of town. I'm sure the waiter was relieved that we were able to nail this decision down without so much discussion. I know that I was. Nutella and Burnt Marshmallow. Done.
The milkshake was awesome. The whole night was, really. Good company, good food, and I wasn't tricked into eating things that I thought I hated or forced to stuff vegetables into a blender.

Posted by Stephanie Gallman at 8:51 AM