Day 28: High School Get Down

When I started this project, my friend Emily, a high school English teacher, was so excited to help me come up with ideas for the blog. She and her husband Scott immediately started brainstorming and sharing their ideas with me via text message, email, and one night, via drunk dial from a bar.

Wear your bra on the outside of your shirt.
Weird (and most likely all Scott).

I could hardly contain my excitement. Is it strange that I was this pumped about returning to high school to chaperone a dance? Probably. No, definitely.

I shared this blog possibility with some colleagues and they all erupted in laughter. "Do we think it's a good idea for Stephanie to chaperone a high school prom?" they all asked each other in front of me.

Without pausing, one of bosses replied, "Well I guess it depends on whether you're a parent or a student."

Admittedly, I'm a little wacky, and I like to have a good time, but I'm still responsible. I dare some high school kid to drink alcohol or smoke pot before coming to a dance that I'm chaperoning. I dare them. 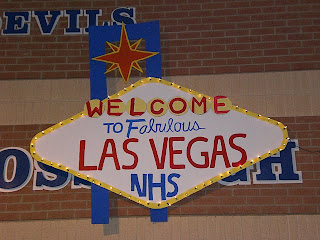 A couple of weeks ago, I got an email from Emily, "Interested in chaperoning the Homecoming Dance at my school this weekend?"

Prom isn't until the spring, so it was like Christmas came early. "I'm in," I replied.

That's right, friends, this former Homecoming Queen (yep, still living in the past) went back to high school and made Day 28's thing I've never done before: chaperone a Homecoming Dance.

Leading up to the dance, Emily and I exchanged text messages and emails about what we should wear, what time she wanted me to pick her up and what color corsages we would buy each other. While the conversations were all in jest, I truly wasn't sure what the attire for such an event was, especially for a chaperone. Emily assured me that whatever I wore would be far better looking than anything that I'd find at this dance.

We also confessed to each other on the way to the dance how hard it was not to have a drink while getting ready for the event. How sad. Out of habit, I actually went to my refrigerator to pull out a beer and then remembered I was going to a high school dance. Adults navigate through social anxiety with alcohol. High schoolers don't have that option, at least not out in public. No wonder high school sucks so bad!

When we arrived, I was immediately shocked at some of the outfits the girls were wearing. Shocked that their parents let them leave the house wearing such short, tight clothing, but more shocked that they felt comfortable enough to leave the house wearing dresses that barely covered their backsides with stripper shoes. By the time I got to high school, I was deep into a hate/hate relationship with my body and spent most of my time figuring out clever ways to cover it up. Not these girls. They were letting it all hang out.

The event was held in the school's cafeteria, which was huge and extremely dark, with the exception of two portable colorful strobe lights. There were a lot of kids there, and they could've spread out on the floor, but most of them huddled around the DJ table. And by DJ table, I mean a cafeteria table with a sound system on it. I followed Emily's lead and we stayed on the periphery, observing the dancing and daring each other to leave the outskirts to go into the dance mob to check things out.

For the most part, the kids were well behaved. There were some questionable moves on the dance floor, but that was to be expected. And there were a few groups who thought it would be a good idea to climb on each other's shoulders (Why? Why would they do this?). I even ventured through the crowd at one point just to get the full experience and the worst thing that happened to me was that I had to smell sweaty teenagers, which reminded me of my own prom date my senior year. He and I are still friends and I know he would agree that he was probably the sweatiest guy at our prom. Teenagers are stinky. But as far as I could tell, these students were following the rules. 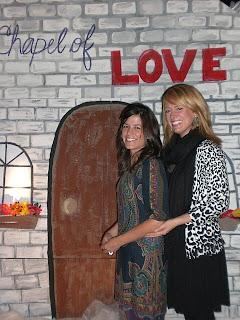 Sadly, in the two hours we were there, Emily and I only recognized about ten songs, including Usher's "Yeah," (major screams from the crowd), Michael Jackson's "Billie Jean," (we were pleasantly surprised and extremely pleased that they even knew this one), and the Cha Cha Slide (always a crowd favorite, even among my old friends).

Even though it has been more than ten years since I graduated, I still remember being in high school. Perhaps it's because I've remained friends with a lot of people that I went to high school with. I look at pictures of myself from that time and still think I could pass for being in high school, though I'm sure that ship has sailed. Whatever the reason, it doesn't feel like it was that long ago.

But this dance reminded me how long ago high school actually was for me. I felt old. A lot has changed since I was their age. This is the Internet, cell phone, Facebook generation(now I sound old too).

Periodically we'd see kids emerge from the crowd talking on cell phones, which I found odd. I wanted to run up to one of them and say, "You're 16. Everyone you know is out on that dance floor. Who could you possibly be calling?"

Still, despite all that is different about their high school experience and ours, Emily and I remarked about how much is still the same.

The same cliques of teens that existed when I was in high school still exist now. The smart kids, the jocks, the snobby girls all stuck together with their own group and it wasn't difficult to pick out who was who.

There are the awkward teens who couldn't dance, but really tried. My favorite part about these kids is that many of them came over to talk to Emily (Mrs. Russell), who in addition to being a great teacher is also a hottie. I imagine to them, the Van Halen song "Hot for Teacher" applies here.

There were the so-in-love-I-want-to-slow-dance-all-night-even-to-fast-songs couples that were holding on to one another as if it was their last night on earth.

There were the guys who were too cool to dance at all, who talked about how much the party sucked and how they couldn't wait to leave. I imagine a keg party at someone's house whose parents were out of town was in their future.

I didn't get to bust anyone making out, or break up any fights or even console a scorned teen-aged girl for getting burned by her two-timing boyfriend. But the night wasn't a complete loss...a teacher and one of my fellow chaperones walking through the crowd had her ass grabbed by a student.

It's still unclear whether or not the butt swipe was intentional or accidental, but it had us all laughing for a while.

High school can be fun, I guess. Even as an adult.
Posted by Stephanie Gallman at 12:38 PM