Despite the stressful drive and late arrival to Palm Springs/La Quinta the night before, several of us woke up early. 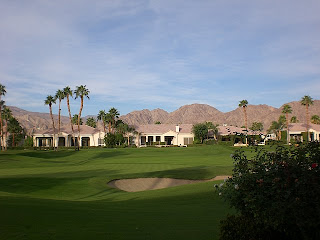 I say "stressful," but who am I kidding? The only person it was really stressful for was Randy, and that's because he was driving. I was in the backseat talking about blogging and thinking of new ways to use the word Temecula.

I can't speak for the others, but I was too excited to sleep. I was in California! And not at work! 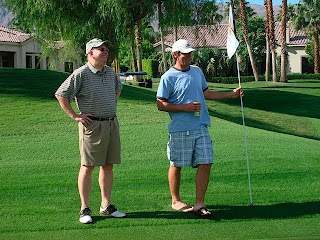 So when I saw my friend Zach, who is a caddy, head out to the PGA West green in our backyard, I followed to see what he was up to. Zach, who has never met a stranger, quickly befriended the golfer, who was alone and just practicing.
Several of us quickly joined him on the green.

And then Melanie suggested I may Day 34's thing I've never done before to sink a putt on a PGA golf course.
Once again, is there anything this woman doesn't think of?
Yes, of course that's what I should do!
If it wasn't for her, I probably would have been forced to hold hands with some dude with dread locks later that night. 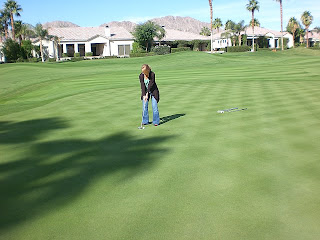 Besides the course itself and the beautiful blue skies above us, nothing about completing this task was pretty. My attire, my reaction, the three tries necessary to pull it off, none of them were ever a part of how I saw scenario playing out in my head. But I didn't care. The sound of that golf ball dropping into the cup was worth it, even if the circumstances weren't perfect. And it definitely confirmed that in addition to golfers and golf courses, I actually do enjoy golf.

The only let down was that my dad wasn't there to see it. I emailed him immediately afterwards to tell him about the thing I'd never done before. 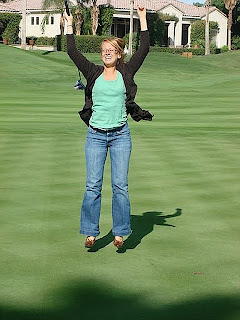 His response was quick, "Good for you. How many tries?"
He's my dad. He knows me, and my golf game, pretty well.
I couldn't lie, "Three tries. Got it in on the 3rd and sank 2 in a row. I need some more practice."
That's an understatement.
I planned then to call my golf instructor when I returned to Atlanta, or maybe add "Go to the driving range alone," to one of the things I've never done before.
Oh, and Dad, thanks to modern technology (and friends with nice cameras), you WILL get to see it. Just tilt your head to the left.

Posted by Stephanie Gallman at 9:06 AM