Day 26: A Million Thanks

Those of you who read the blog regularly can probably tell that I’m extremely behind with writing the entries. Have no fear, I have definitely kept my promise to do something different every single day. I promise. I just haven’t been able to find the time to write about it. I’m trying to stay dedicated, but I’m neglecting other things in my life. Like sleeping, working out, eating.

Actually, that’s not true. I am eating, which makes the fact that I’m not working out even worse. Is it possible to gain a pant size in one day? That's definitely something I've never done before, and I think I'm on my way.
More than one person has suggested not making each entry so long, so I can get caught up and not stress so much. I think this is a wonderful idea, and it is one that I have tried many times. I mean, honestly, how much is there to say about wearing red nail polish? However, even when I think I have nothing to say about something, I sit at my keyboard, start typing, and the nonsense just pours out of me. The next thing I know, surprise! Lookie there! I did have something to say!
So genius over here, who was headed on vacation in a matter of days and is already long-winded decided to add to the anxiety by making Day 26's thing I haven't ever done before: write a letter to the troops. 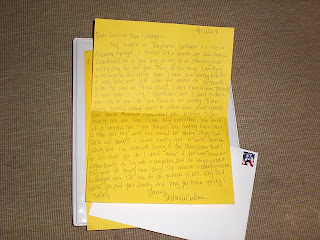 I currently know only two people serving in the Middle East, but my goal here was to contact someone I didn’t know. I logged on to the internet to see where I could do something like this and was pleasantly surprised at how many organizations have letter writing campaigns for the troops. I almost signed up for one that required at least one letter per week for a minimum of three months. A small commitment, but with the blog and trying something new everyday, I didn't think I would be able to pull it off. I decided to go with "A Million Thanks" http://www.amillionthanks.org/.

I started the letter just introducing myself and telling them where I lived. And then I paused, looked around for something else to say about my life.
Nothing.
More pausing. More looking around.
Wow, am I really this lame? I'm know that I'm not, but I had this blank sheet of paper staring back at me and nothing to put on it. It reminded me of the weeks leading up to my brother's wedding when people would ask me what I was up to. The only thing I could ever come up with was, "my brother's getting married in September to the greatest girl. We're all really excited!"
This response usually garnered approving nods, but it was pathetic. Definitely more upbeat than, "well, Monday I went to the gym and then to work...Tuesday I went to the gym and went to work...Wednesday, I went...," though. And it was true. I really was excited about my brother's wedding.
Still, I worried about what would happen if, in five years, I was still just getting up and going to work everyday if someone again asked me what I was up to, if my response would also be, "Well, my brother married to my sister-in-law back in September of 2009. It was a great time!"
So, after a lot of contemplation about what to say, I just went for it.
I thanked them. For what exactly, I don't know. I can't imagine the sacrifice they are making for me and for everyone else in this country and I said that. I tried my best to be sincere, and told them how much I appreciate them (which I do) and that I don't understand what it's like for them day-to-day (which I don't), and there isn't a day that goes by that I don't consider how lucky I am to be on this side of things. 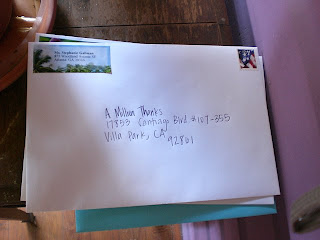 And then I told them about the blog.
Ugh...I hate myself. "Thanks for risking your life for me everyday. Here is my stupid blog?!" Who says that? Maybe I should've told them about my brother's wedding.
In my defense, the organization accepting the letters said on their website that letter writers should keep the letters positive, and keep them simple. "Tell them about your life, your family, what you do everyday," the website says. And though sad as it may be, the blog is, in fact, what is going on in my life right now. So I told them about it.

There are never enough words, or the right words, to thank anyone who risks their life for someone else, but if there were, I suspect "blog" wouldn't be among them. But if I could, I'll make this a public thank you to anyone who is currently serving or has ever served in the United States Armed Forces. Seldom am I at a loss for words, but there really is nothing else to say. THANK YOU. Thank you so very much.
And again, not trying to tell anyone what to do, but this is one thing I've never done before that felt pretty good. http://www.amillionthanks.org/
Posted by Stephanie Gallman at 9:43 PM