Day 36: I Called the Opener

My trip to Palm Springs and the Phish Festival 8 was drawing to a close. For those of you who are unfamiliar with, or do not enjoy the band Phish, I'm going to try and keep this entry brief for fear that I may have already bored or confused you. 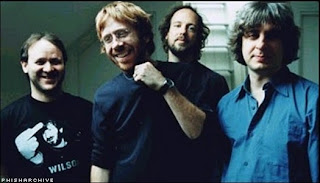 A little background here: Phish is a rock band that was formed at the University of Vermont in 1983. Everyone describes their music differently, but they are probably best known for long jams and their ability to improvise. They also have dedicated fans, who will spend lots of money and travel far distances to see them play, knowing that they're going to have a different experience every time. Phish never plays the same show twice. They've been around for a long time and have an arsenal of original and cover songs that they play, so the fun for me is the anticipation of what they'll play and what's coming next.

Thus, while seemingly ridiculous to some that I would travel to California to see a band I've seen several times before, this is "par for the course" Phish behavior. I've seen them play in Tennessee, Vermont, North Carolina, Georgia, Wisconsin, Virginia, and now California.

Impressed? Don't be. When it comes to Phish, I'm a rookie.

There is a reason why Team Temecula executed our trip to Palm Springs so successfully. Because between them, they've seen Phish hundreds of times (maybe thousands, seriously), in dozens of cities. They know what they're doing because they've done it before. A few times.

Their knowledge and experience with this band far surpasses mine.

In addition to renting fabulous houses on golf courses, orchestrating elaborate group costumes that light up, Team Temecula also plays a pre-show pick game. Everyone throws in cash, picks five songs that they think Phish might play. The person who picks the most songs, wins the cash. 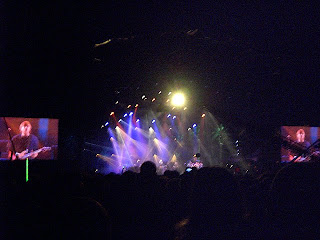 I hate this game for many reasons. First of all, when it comes around to me to pick a song, I can't ever think of one. My mind goes blank. And the picking is supposed to move quickly. Secondly, sometimes this game has the potential to become a "I know Phish better than you" contest, and I hate that too. And third, I never win.

But I played along, again, not wanting to be a party pooper. Friday and Saturday, Zach and I made our picks as a team. I think it's supposed to be an individual sport, but we didn't care. We also never won.

Sunday rolled around and I ended up hanging out with some other friends at their campsite (slumming it, I know). They had been playing their own, less organized, no money on the table version of the picks game. Just one song. Winner wins nothing, except the respect of the others.

I threw out one of my favorite songs, "AC/DC Bag." This was not a radical pick. They frequently play this one and hadn't yet since the festival began. But still, I called it. It was all mine.

And sure enough, as we are making our way to the field for the last night of the festival, Phish played the first notes of their first song. My friend stopped walking and said, "Wait, is that...? That's AC/DC Bag! Steph, you called the opener!"

Indeed, Day 36's thing I've never done before was to call the opener at at Phish concert.

And for your viewing pleasure, here it is:

Email ThisBlogThis!Share to TwitterShare to FacebookShare to Pinterest
Labels: Phish