I have been a bridesmaid 12 times.
That means that in my adult life, I've thrown at least 12 showers, walked down 12 aisles, and yes, I own 11 bridesmaid's dresses (11 because Danielle told me 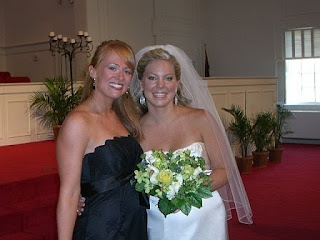 to wear whatever I wanted.)

I get teased relentlessly at work for having participated in, and attended, so many nuptials, and I am often the go-to girl for any wedding related questions.
"Don't you get sick of going to weddings?," I am often asked. Nope. I really don't. I still genuinely love them, and am actually quite sad that since most of my really close friends have already gotten hitched, my days of "bridesmaiding" are numbered.

"How much money have you spent over the years on all of these weddings?," they all want to know. Truthfully, I have no idea, and I'd really rather not think about it. I'm sure it's obscene, but I'm also confident that it was money well spent.

My favorite question, though, "Where do you keep all of the dresses from the weddings you've been in?" Most are hanging in my coat closet. Some are at my parents' house and a couple have 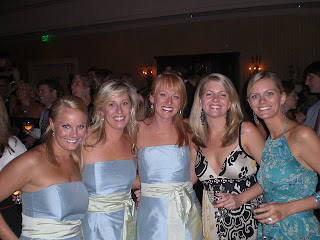 been misplaced (probably during a really fun wedding weekend) and were never spoken of again.

Since most of the brides I've walked down the aisle for have also been in their fair share of weddings, I have fortunately been spared the promise that their bridesmaid's dress choice will be the one that I can, and will, "totally wear again." My friends know that the likelihood of that ever happening is slim, because they have a closet full of never-to-be-worn-again bridesmaids dresses as well. So our conversations about the chosen wedding attire is much more direct, almost business like.

"Here is what I chose. No, you'll never wear it again. This is how much you owe."

Luckily my friends have excellent taste, and while the back of my closet compares slightly to Katherine Heigl's in the film, 27 Dresses, it does so in volume only, not in the ridiculous get ups her character was forced to wear. I've never truly hated anything that I was asked to wear, and even the dresses I questioned at first looked pretty good in pictures. 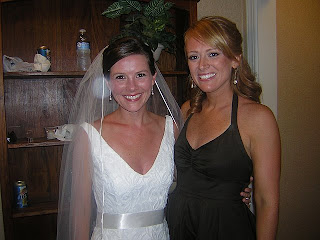 In two of the more recent weddings I'd been in, the dresses came directly from the pages of J.Crew magazine, making them perfectly acceptable frocks for something other than their initial purpose. But for whatever reason, I'd yet to overcome the fact that while it may look like a simple cocktail dress to everyone else, to me, it would always be Emily's bridesmaid's dress, or the dress I wore in my brother's wedding.

Until Dan and Karen's big day, I'd never worn any of these dresses again, but that's exactly what I intended to do as Day 251's thing I'd never done before.

The time had come for a bridesmaids dress redo.

I immediately narrowed down the choice to two possibilities, Emily's or Katie's. Both J. Crew, both brown (and therefore easy to accessorize), both had pockets (the greatest addition to a dress ever). Emily's dress was strapless and more of a satin material. Katie's was a halter-style, and a heavy linen.

Katie and I spoke on Friday over the phone and I told her my plan. She said she thought it was 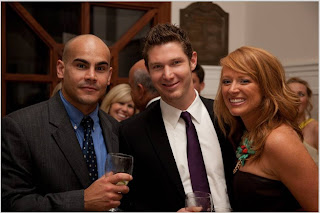 a great idea and was flattered that the dress I wore in her wedding was in the running for the dress I might wear to pull the challenge off. Then we discussed why re-wearing a perfectly normal looking bridesmaids dress is such a difficult thing to do.

"I feel about it the same way I think about turning 30," I told her. "I don't mind doing it, I just don't want anyone else to know."

The trick then to pulling off the redo was to change the look of the dress completely to make it more evening friendly and less "bridesmaidy."

On Saturday I went to a jewelry boutique in search of bold colors or big gemstones (or both) to achieve this tall order. 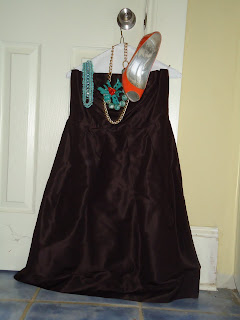 of something to turn an old bridesmaids dress into something special. I left an hour later with an enormous necklace, a cuff bracelet and a pair of earrings. I had no idea which of the three I'd wear, but they all matched each other, and I knew they'd match either Emily's dress or Katie's dress.

When I got home, I spent at least half an hour pairing different shoes and different accessories with each of the dresses. In the end, Emily's dress was the one I chose to wear a second time, with the necklace, bracelet, and a pair of bright orange shoes.

The outfit may have been a little loud, but there was no denying it did not look like a bridesmaids dress anymore.

"Wow," my friend Billy said as we were taking our seats for the wedding, "That is quite a necklace."

"Thanks," I said, touching the new purchase on my neck, ignoring the fact that what he said was likely not a compliment.

Another man commented on my outfit while I was standing in line for food.

"I just love what you're doing here," he said motioning with his hand at my ensemble. I smiled and thanked him. And then I looked at his wife and considered asking her if she was aware that her husband might be gay. 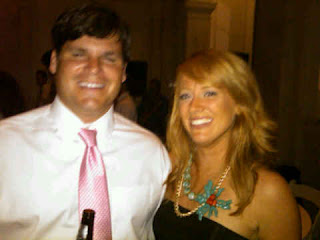 I received several other compliments and I could not help but feel that this was a great idea--a fiscally responsible decision and a creative masterpiece, if I do say so myself. Not one person asked if I was wearing a recycled bridesmaids dress, which makes me think that maybe it's time I cleaned out my closet and to give these dresses I've bought and worn only once a chance at a second life.

Probably what would best accompany a blog about an outfit that I wore would be a picture of me wearing the outfit, right? Well, yes, except genius over here completely forgot to take one, so I was forced to rip the only pictures I do have from my friend Billy, and also the wedding photographer.

Kudos to me for staying out of the photographer's line of fire, something that in the 60+ weddings I've attended, I've never been able to do. But stupid of me to not illustrate how a bridesmaids dress redo is completely doable. Hopefully you'll get the point by the pictures I do have. If not, you'll just have to take my word for it.
Posted by Stephanie Gallman at 12:00 PM