Like the Cooper River Bridge Run in Charleston every spring, the annual Gallman Beach trip to Oak Island, North Carolina (formerly Long Beach) is a part of who I am. My extended family has been coming to this beach for a week during the summer since 1982, when I wasn't even two-years old. 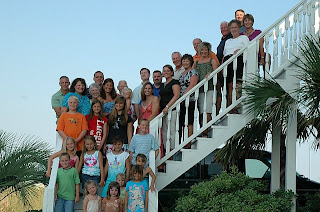 Not surprising, then, that Oak Island is the backdrop of so many of my childhood memories. Looking through my Aunt Margaret's photo albums is like looking through one big book of gross teeth, bad fashion decisions and terrible hair, but the pictures, good, bad, what the hell was I thinking, tell the story of my life.

To be at the beach and find something to do that I've never done before was going to be difficult. Not because there aren't always possibilities everywhere, but because I like this trip exactly the way that it is.

I mean, all we really ever do at Oak Island is sit on the beach, read books, and talk to each other. And then we take showers, go to dinner and go to bed. The next day we get up, and we do it all again. And in 28 years, that hasn't really changed. We've rented different houses, we've all reached the crucial age of 21 and exchanged sodas for beers, my cousins have added spouses and children, but overall, this beach trip remains the same.

And that is why I love it.

I also love it because it's usually the only time during the year that I ever see my aunts, uncles and cousins. Busy lives, hectic schedules, and geography prevent us from making visits during the other 51 weeks of the year. Luckily we're able to easily pick things up right where we left them the year before, regardless of what ups or downs the previous 365 might've given us. One summer I said goodbye to my newlywed cousin Andrea and the following summer, I said hello to her and her new baby girl. I never once saw her pregnant.

Because my stops at the beach lately have been brief, I often feel like the tornado of the group. I'm the wacky cousin from Atlanta who blows into town, tells a bunch of crazy stories about the last 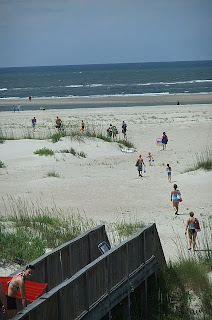 year of my life rapid-fire style, and then I leave. In 48 hours, I'll cover my job, any relationships, friends, successes, failures, hopes, dreams, throwing in random stories about funny things that happened to me (and as you know, there are a lot.) I don't know if they are just satisfying my affinity for story-telling, or if they truly enjoy my shenanigans, but they make me feel like a stand-up comedian.

That I, Stephanie, the youngest cousin, the baby who used to sleep in a crib at the beach and who used to follow them wherever they went is turning 30 this year might be even more of a trip for them than it is for me. Being the youngest has its advantages in that any milestones I reach aren't being held in comparison to anyone else. Of course I'll be the last to get married and have children and buy a house. I'm the baby! And even though I may be concerned that I haven't done any of those things, my family never makes me feel like I might not be living up to my full potential of a normal 30-year old. They take me just where I am, ridiculous stories and all.

There is always a little anxiety interacting with my cousins' kids, however. Not because they're not cool, sweet kids, but because they don't know me. And seeing each other once a year doesn't work for them the way it works for their parents and me. We don't have the history there, so there isn't the opportunity to simply pick things up where we left off the year before.

"Hey A.J., remember when we caught all of those minnows and put them in the bucket?," doesn't sound like distant relative trying to make conversation. It just sounds creepy.

So over the years I've been trying to manage these relationships a variety of ways. First, I tried to be their friend, meet them on their level, and talk about things that I thought kids liked. Maybe I came on to strong, because they were not impressed. I'm still not sure if I simply annoyed them, or actually scared them. Regardless, it was a rookie move and it didn't work.

One year I tried to take my dad's approach and simply do my own thing and ignore them. My dad is like the kid whisperer, though nobody really knows why because having no grandchildren of his own, he doesn't really know how to behave around little kids. So he just acts like he would if there weren't any kids around. And kids can't get enough of him. I tried this; I acted like I was too cool, and didn't really pay attention to what they were doing. The result: they ignored me right back.

This year, I wanted to strike a happy medium. Be nice, and be available, but play it cool, don't seem overeager to be their friend, and don't force conversation. Let it happen naturally. Recognize that not all of them are going to be interested in you. Just focus on the ones who are. Funny, I think I've been given that advice as it pertains to my dating life. I guess it works in a variety of different scenarios.

My Aunt Margaret suggested that I should act as the lifeguard for all 14 kids in the pool as Day 266's thing I've never done before. I immediately shot down the suggestion, explaining to her that I only put my own life in danger for this project, no one else's, especially children that I'm distantly related to. 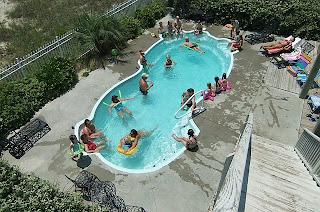 he water gun fight was a step in the right direction, but I still wasn't sure that they really know who I am, or if they understood how I fit in to the whole group. Again, the whole tornado metaphor applies here. I blow in, I blow out, and they don't see me again for a year. And I imagine they're all left wondering, but are too afraid to ask, "Who is that weird red-headed girl?"

The oldest generation (my dad and his siblings) was watching the pool pandemonium from the chairs on the patio. No one wanted to come near the water with so many young kids throwing Nerf balls and squirting each other with toy guns. There was a lot going on in that pool. But it was hot outside, so in search of some refreshment, my dad took matters into his own hands. He stood at the edge of the pool and yelled, "ADULT SWIM!," signaling it was time for all of the kids to get out of the pool and let the adults have a turn.

I laughed at my dad's clever maneuver, and stayed put in the deep end, quite pleased that by being 29, I've managed to earn a permanent spot in this pool; still young enough to squirt the little ones with water guns, and old enough to qualify for "Adult Swim."

But as the little ones swam to the side of the pool, my cousin Bethanne's daughter Tara looked at me and said, "You know, you're really not an adult."

Wow, I thought. All this time I thought these kids didn't really know me, but with those five words, I discovered, as Day 266's thing I've never done before, that Tara knows me a lot better than I thought. Maybe the other kids do too. Their parents' baby cousin is really just an adult-sized big kid.

After a full long day on the beach, we split up as a big group to celebrate Father's Day with our dads (not because we didn't want to hang out with each other, but because taking 33 people to a restaurant is a disaster.) Father's Day for me involved several more things that I'd never done before: asking my dad to edit my blog (about the NFL draft), drinking a Manhattan cocktail with him (disgusting, huge mistake), and watching the biggest choke in golf I've ever seen by Dustin Johnson at the U.S. Open.

And then, just to prove that we are either the most boring, or perhaps the most awesome family ever, we capped off the evening with some brownies, ice cream and home movies. First was the slideshow I made for my brother's wedding (followed by a reenactment of the toast I gave at his rehearsal dinner, which lacked in inspiration and authenticity considering it was a year later and Jeff wasn't even there. They didn't care, they ate it right up), and then a corporate "explainer" video all about my cousin Jason's wife Mindy's company. Apparently she was tired of explaining what she does for a living, and she preferred to have us watch for ourselves. I was actually into it, especially getting a kick out of all the different characters/employees they chose to narrate the film.

And that was it. A lot of ground to cover in two short days, but like always, I came, I shared, and I left. And I can't wait to do it again next year.

Oak Island on Dwellable
Posted by Stephanie Gallman at 11:35 AM