A last minute, going-away pot luck at work scheduled for Day 254 meant Day 253's thing I'd never done was going to involve making a food I’d never made before.

I considered a dessert, but didn’t really want to go to the store. I wanted to make something happen without leaving my house. I looked in my fridge and cabinets and only found orange juice, ketchup and tortillas. 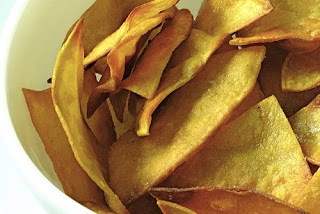 For the record, I'd like to point out if my mother found these same items in her cabinets, she would've been able to pull off a five-course meal. Her ability to make a meal out of nothing is not one of the traits I inherited from her, unfortunately.

For me, not having many options is a good thing. And on Day 253, as the thing I've never done before, I used what I already had to make homemade tortilla chips.

I filled a stockpot (I think this is what it's called, I had to consult the Bed, Bath and Beyond website on this one) with oil and let it heat up. I cut the tortillas and when the oil was hot, dropped them in one at a time.

The tortillas cooked happily on the top of the oil, and after a few minutes on each side, I removed them and put them on a paper towel, salting them immediately. Done. Easy.

There is a reason why chips taste good and it simple: Because they are cooked in oil and covered in salt.

There is also a reason why I won't be making my own chips at home very often and that's because it made my house smell like McDonald's.
Posted by Stephanie Gallman at 2:30 AM