When my brother and I played golf with my dad on Day 244, I noticed a new fluidity to my dad's swing that he credits to his new workout regimen that he isn't bashful talking about. He'd swing the club, and if he hit a good shot, he'd look at one of us, nod his head, and say, "Pilataaze."
My dad is a guy's guy, so the fact that he ever agreed to participate in workouts that included yoga and Pilates (or Pilataaze, as he likes to say) is amusing to me.

That he told me, or anyone, that he did is downright shocking.

But he not only tried both in an effort to get fit, strengthen and stretch his back, he credits yoga and Pilates with also improving his golf game and improving his flexibility. 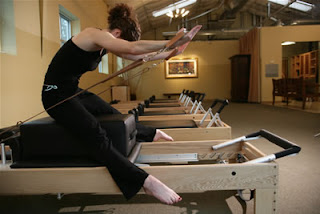 When he first told me he was taking Pilates, I assumed it was the mat classes that I'd taken before, but he said no, he was actually on the real deal machines, with an instructor's help, gliding his way to a stronger core and long, lean muscles. I was envious, and a bit surprised that my dad had tried it before me.

I arrived at Intown Pilates and met my instructor, Kathleen. She was everything I wanted in an exercise instructor: young and gorgeous without an ounce of fat on her anywhere. She led me to the room in the back, where there were four Pilates reformer machines, and three other students waiting.

The three other ladies were friends with each other, and also friends with Kathleen. They clearly had done this before, so I was slightly intimidated. Since I'd rocked it in Disco Jazz on Day 262, I was still confident in my abilities.

A Pilates reformer machine looks like it could be a variety of things: a torture device or an oversized sex toy. There is a seat that glides called the carriage, a foot bar, and a spring system used for resistance. There were four springs on my reformer (I'm not sure if that's standard), each color-coded red, blue, yellow, and green.

At the other side, there is a head rest, complete with shoulder blocks and two leather straps or ropes connected to a wooden frame. I told you, this machine is strange and it looks like it is anything but a piece of exercise equipment, and something far more kinky.

Kathleen led the class in a friendly manner, and she was extremely helpful to me, especially in helping change the resistance with the springs. But she announced to the four of us that she was in an exceptionally good mood. I thought this would translate to an easy 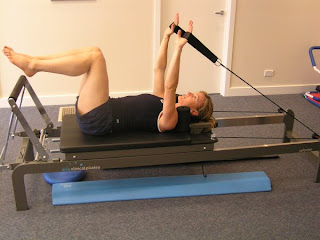 day, but when Kathleen is feeling upbeat, she likes to take it out on her students.

Most of the time we spent on the reformer, using our own body weight as resistance, gliding back and forth, pulling the leather straps back and forth with our arms and legs. Each movement is deliberate and controlled, engaging the core muscles.

A lot of the exercises we did while lying down, which makes the a case for Pilates being the greatest workout ever. But it's not easy. I learned pretty quickly that just because the movements are slow and there isn't a lot of jumping around, doesn't mean that it's not challenging. I could feel my muscles really elongating.

The only thing negative thing I can say about Pilates, and what might keep me from taking more classes in the future, is the price. The drop-in class that I did was $25. I pay $30 a month for a gym membership, so I don't know if I could swing these classes every week.

But since my Dad is such a fan, maybe when I'm back in South Carolina we can get our Pilataaze on.

P.S. When it comes to fitness, my weeks are four days long. This is where "Fitness Week" ends.
Posted by Stephanie Gallman at 12:45 PM