After such a lame at-home dance class on Day 261, I decided I really did want to dance for real. I wanted to take a dance class. In a dance studio. Just to prove to myself that I could still do it, and not just in the context of the spontaneous, sometimes inappropriate dance parties I always throw.

So Day 262's thing I've never done before was to take a Disco Jazz class at Dance 101studios.

I have taken classes at Dance 101 before, but the studio offers so

many different styles, I could've knocked out several blog entries in one day just there. I opted for Disco Jazz, Level One. Disco because it just sounded like fun, and who doesn't like disco? Level One because who am I kidding? Despite a class or two here and there, I haven't danced in a dance studio in probably ten years and I didn't want to make a fool of myself.

Plus, I've spent the last year being the worst participant in whatever I was doing (rock climbing, anyone?). I was hoping that if I aimed low with a Level One class, then maybe for one of first times this year, maybe I'd have a chance to be one of the best.

The first thing I did when I arrived at the class was secure a dance space in the back. The second thing I did was check out all of the other students in the class. Part of me, admittedly, was sizing them up, assessing their dance abilities based on their physique and attire.

But most of me was genuinely curious about what kinds of other people were attracted to a class called, "Disco Jazz." As you might imagine, it was a mixed bag. Lots of young people (I'm including myself in that category), some middle-aged moms, and at least one woman in her 60's or 70's wearing shiny leggings and a leotard. She looked like she hadn't eaten since Disco was popular, which made me sad. What made me happy was her over-processed, teased hair and full face of makeup complete with red lipstick. I appreciated that she was there, decades older than most of the others in the class, letting her hair down and helping to keep disco alive.

Bubba, our teacher, sauntered out to the middle of the dance floor and explained how the class was going to go. I was surprised that his name was Bubba, as nothing about him, except for his thick Alabama accent, fit that name. He was fabulously flamboyant and hysterically funny without meaning to be. Bubba, I later learned, is the Artistic Director of Dance 101, and has an impressive dance resume which includes choreography and performing gigs with Cher and Prince, just to name a couple. I loved him.

Bubba started us off with a warm-up and 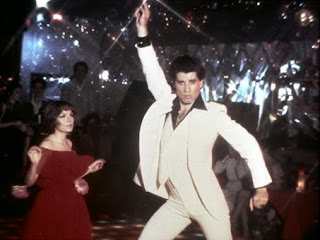 then instructed us to move to one side of the room so that we could, "go across he floor." I had to laugh, as, "going across the floor," has been, at different times in my life, my least favorite and my most favorite about the dance classes I've taken over the years. When I was younger, I hated going across the floor and hated people watching what I was doing for fear that I looked ridiculous and that they would make fun of me. Once I got better and more confident with myself and the other girls I danced with, "going across the floor," was the most fun exercise ever, the source of much laughter and immense joy. This time, I felt a little apprehensive, but definitely enjoyed myself, only wishing that my old dance buddies were there with me.

After we moved across the floor, Bubba moved us back to the center where he began teaching a combination, or a mini-dance routine. The moves were simple, but a lot of fun.

He was moving along with his instruction, and then he paused. He sort of stood there with a mischievous look on his face and then he turned around to face the class.

"I'm hesitating on this next move because it's just so . . . so gay," he said. And then he paused, grinned, looked at all of us in the mirror and said, "Eh, who cares? This is disco!"

And then smiling all the way, Bubba taught us a move straight out of Saturday Night Fever. It's hard for me to describe it, but the move is heavy on the arm movement. Left arm out, right arm does this kind of swing around pumping thing. Like I said, I can't really describe it, but I loved the move so much, I have now incorporated into my dance repertoire, and I cannot perform the move without smiling. I've since showed several of my friends, including Katy, who asks to see it often. I even showed it to FF, who seemed more amused than weirded out, which was a relief, as I'm sure it so easily could have gone another way. If you'd like to see the move, just ask me. I'll gladly show it to you. 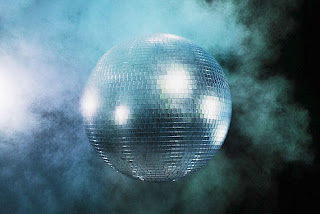 The class went by really quickly. Bubba taught fast, much faster than I would've thought for a beginner class. I suspect this was because he wanted to give us plenty of time to do the routine with the music. Once he turned it on, I understood why. The song was so much fun, and the class made It was so much fun. There was such a sense of camaraderie among the other dancers and me. None of us were trying to secure a spot on the front row, or battling for a solo; we weren't even rehearsing for a performance or a recital. This class was all about the childhood fun of dance that I remember, minus the stress of getting it perfect every single time.

But make no mistake, I came to prove that I've still got it. And I did just that. I mean, I wasn't busting out switch leaps or triple pirouettes or anything, but I nailed these moves just like I did in the 1990's.

Oh, and who said disco died? In Atlanta, thanks to Bubba, disco is alive and well!
Posted by Stephanie Gallman at 11:45 AM