I didn’t have the heart to mention in with Day 258, but the super cool, totally Euro World Cup party eventually turned into Kyle's Craft Hour late night after we (she, Elizabeth, Momo and I) realized there was still a great deal that needed to be done ahead of the baby shower we were 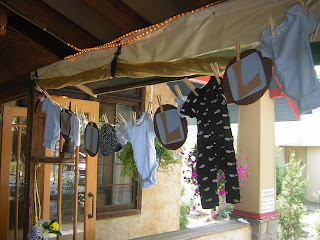 hosting for Trish the next day.

See how this blog sometimes builds on itself? I worked on crafts at Day 258’s World Cup party for Trish’s baby shower on Day 259. That shower was for Baby Will, who I just saw in 3D at Trish’s sonogram on Day 257. Get it?

Kyle set up an assembly line on her dining room table and we went to work on these beautiful crafts that she had envisioned for the shower. Menu cards tied with ribbon, mason jars full of cookie ingredients, a wish book. There was a lot of cutting, a lot of tying, a lot of me trying to make exact replicas of Kyle's prototypes and failing miserably.

True, I had never gone to such great lengths for a shower before, but that's not what Day 259's thing I've never done was. I'm simply telling you about the crafts to make the point that this 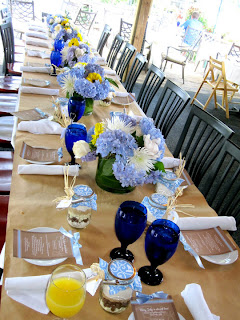 baby shower was No. Joke. Southern Living would have been impressed.

And though I technically was a "host," of this party, I am ashamed that because I lack the creative prowess of others, my responsibilities for the shower were limited to cut-outs of the name, “W-I-L-L,” that hung from a clothes line full of other baby clothes.

Kyle, Momo, Elizabeth, Chrissy, Heather, on the other hand, they pulled out all of the stops. This shower was top notch.

But all of the creative touches and hard work could've been for nothing as we all watched the shower come to an abrupt, potentially fatal, halt.

What happened was not what I could've predicted when I arrived at Basil's, a quaint Buckhead bistro where the shower was held, an hour before the party was supposed to start. I was the first one there, a fact I'd like to shout loud and proud because seldom am I the first one to arrive anywhere.

Guests trickled in, all impressed with how gorgeous everything looked. Trish was blown a 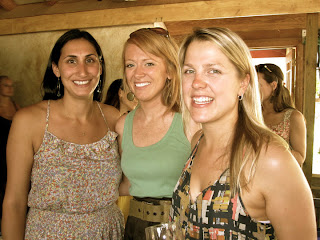 way, touched at the outpouring of love from her friends and probably still in disbelief that in a few short hours, she would become the owner of items with names like binkies and booties.

Day 259 was a hot day. By the time everyone arrived, we were all sweating, nearly melting. Thankfully, the staff at Basil's set up our table in the shade and right under an overhead ceiling fan. We took our seats and brunch was served.

Eating at Basil's was a first for me, and I was not disappointed. I thought the food was great, and the service was friendly. Despite the heat, everyone seemed to be having a great time. 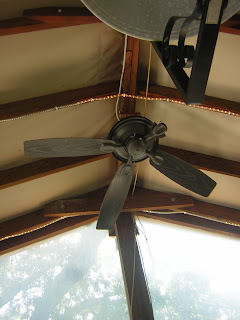 Everything was going along as planned, when out of nowhere . . . BANG! Everyone at our table, and likely other tables, gasped and screamed. It sounded like a gunshot went off.

Only it wasn't a gun that we heard, but instead, one of the blades of the ceiling fan we had been so thankful for had broken loose and propelled through the air to land mere feet from our mother-to-be.

Maybe I'm reaching here, but this little experience was Day 259's thing I'd never done before. My first meal at Basil's, followed by almost getting killed by an active ceiling fan.

The manager frantically ran over to the table where we were sitting.

"Did any of the pregnant women get hurt?!," the owner said.

An understandable question, as I'm sure beheading any pregnant woman is not the best wa 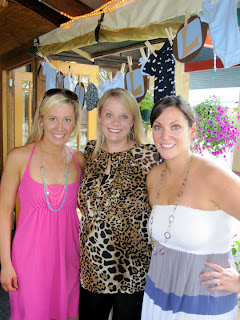 y to get chosen as Basil's "Employee of the Month." But is it wrong that in addition to the pregnant women, I was also concerned about myself and the women who weren't pregnant at all?

Not to mention, he's standing over us asking us if we're okay and the fan is still turned on, ready to shed another blade at any moment while we looked on with horror as it dipped and swayed in the stagnant air.

For the next minute and a half, all of the servers fumbled over themselves, trying to make sure we were okay, making sure the fan was turned off. And then turning it back on. And then off. It was a scene. I tried to just keep my head down and go back to eating but the little episode killed my appetite.

Brunch was over. Time for gifts.

The rest of the party went on without any more drama. I had to chuckle that all of this work for this beautiful shower, and it all could've ended tragically with one faulty fan.

Thankfully, though, it seemed the Crafty Gods were looking out for us.
Posted by Stephanie Gallman at 11:55 AM