I can't figure out a way to say this without offending my mother who hates when I talk about drinking, so I'm just going to come right out and say it: I drank too much on Day 269. On Day 270, like every "day after," I paid for my sins of the night before with an enormous headache and complete worthlessness. 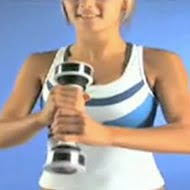 Just getting through the day was my main focus. Doing something new was the furthest thing from my mind.

Only I refused to let hitting a golf ball on Bobby Jones' grave be the reason I let this entire project go up in flames. I couldn't give up on Day 270 just because I don't feel well. So I called on the two men who got me into the previous night's shenanigans in the first place and demanded that they help me out.

"Let's go to Wal-Mart with Justin and buy him his birthday present," Mo said.

I had absolutely no idea how this was going to get me to the thing that I'd never done before. Hell, I didn't even know there was a Wal-Mart in Atlanta, but I figured with these two guys and a discount superstore, something new is bound to happen, right?

The Wal-Mart in Atlanta is tucked in the back of a large shopping center north of the city. I noticed when we pulled in front that just like every other Wal-Mart I've ever been to, this one was bustling with activity. Only I couldn't help but be surprised to see men, women, and children of all ages coming and going as if it was the most natural thing in the world to be buying cheap crap on a Thursday night at 9:30pm. 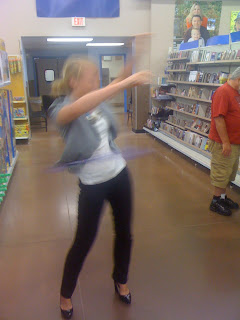 Shouldn't most of these people (especially the children) be in bed?

I do not have children of my own so I'm in no position to judge (wait, yes I am, it's my blog), but could someone please explain this to me? Again, these judgments are brought to you by the same girl who putted on a famous man's grave the night before, but still. What was so important that it warranted bringing entire families to a Wal-Mart Supercenter so late in the evening? I remember being angered at seeing young kids in line at Brandsmart USA on Black Friday and that happens once a year and the discounts really are substantial. This was Wal-Mart. I'm pretty sure that any deals these families were getting at this hour would still be available at 9am the next morning.

A lot of the families were dressed in pajamas, which tells me two things, 1. they are aware that it's late and they should be in bed and 2. they have horrible taste.

Along with providing an ample supply of characters for people watching, Wal-Mart really is a playground for someone like me, who is on a quest to do new things.

Within the first five minutes, we found Justin's birthday gift and I did the first thing of the night that I'd never done before, and that was to give the "As Seen on TV," Shake Weight a try. A Shake Weight is a weight you hold with two hands and shake back and forth like a maraca to tone your arms. You've probably seen the weight on late-night infomercials.

The Shake Weight couldn't have weighed more than 15 pounds, which I found humorous for Justin's sake because he works out a lot. In fact, he's stacked and likely wouldn't reap the benefits of an exercise bar intended for women. Oh well, Mo and I assumed, this present could simply be a conversation piece.

We mosied through the aisles, heading to the toy department where possibilities for fun would be endless. I hoped I might find the bouncy balls that you sit on so that I could recreate the scene from, Don't Tell Mom the Babysitter's Dead, when Christina Applegate's character and her boyfriend go to a toystore and bounce through the aisles. I'm not sure if they make them anymore, though, because I couln't find any. At least not at this Wal-Mart. 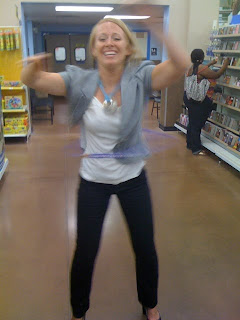 I did, however, stumble upon an entire shelf of hula-hoops. Jackpot.

Day 270's thing I've never done before was to hula-hoop in a Wal-Mart.

I did not hesitate throwing my purse down and reaching for hula-hoop, and I couldn't help but think while I repeatedly flung the hoop around me trying to keep it waist high, that this is what this blog, and this experience, is all about for me. Less about checking off a list of things I have to get done before I turn 30, more about seizing opportunities when they present themselves and living spontaneously.

Instead of saying, "No way! I can't hula-hoop in the aisle! What if someone sees me and thinks I'm ridiculous?," now I'm saying, "Yes, I'll hula-hoop right here, right now. Because it's awesome."

Guess what? People did watch me hula-hoop and they probably did think I was ridiculous. But who cares? I don't know any of those people and I wasn't hurting anyone. Plus, hula-hooping, even when you're bad at it (as I am), is so much fun. Seriously, try to frown while hula-hooping. It's impossible.

I was a little disappointed in my performance on the hoop, considering we all know what a good dancer I am. And I like Phish and those concerts are full of hippies with hula-hoops. But for some reason, I just couldn't keep the hoop circling around my waist, and had to pick it up off of the floor often. I had a couple of good runs, though, and Justin took some turns as well, before stacking the hoops back and moving on. 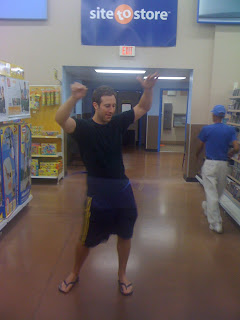 We wandered through sporting goods and tested baseball bats and tennis rackets. I decided that in my post-blog life, in addition to improving my golf game, I really want to play tennis again, after an 18-year hiatus.

In the camping equipment section, I announced to everyone that I'm not really a camper. I've been before, and I'd go again, but I likely wouldn't ever organize a camping trip. I picked up bags full of dehydrated camping meals that reminded me of space food I ate in a science class once. Mo suggested I buy one to try as something I'd never done before. He pointed out that camping food is something I could do when I didn't feel like doing anything else. This was a good idea, and I bought lasagna for two in a plastic bag.

When we made it to the pharmacy section, we each picked up some personal items that we needed (toothpaste for me), and I sat down at the blood pressure machine to get my blood pressure checked for free.

Never was the circus of people that hang out in Wal-Mart late on Thursday more apparent than when we were waiting in line to pay for the items we picked up along our Wal-Mart journey. The inefficiency of this Wal-Mart was also apparent, and we were forced to stand in disorganized lines behind the only three registers that were open for a while. 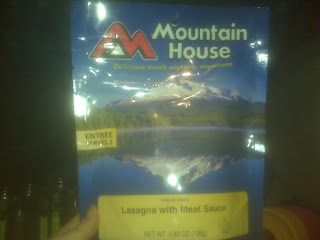 walk from one side of the store to the other. Many of them were yelling at their husbands and boyfriends. Probably because they were uncomfortable.

Ahead of us in line was a guy with six gallons of milk, ten cartons of eggs, and a watering hose in his cart.

He seemed a little shifty and I wondered if he was headed to play a fraternity prank, or if these seemingly unrelated items had anything to do with some insane terrorist attack. Sad, I thought that because of the times that we live in, these were the only two possible scenarios. Couldn't have been scrambled eggs and gardening, must be terrorism.

We finally made it to the front of the line to pay for our items and then all headed home to get the sleep we so desperately needed.

I left with a smile on my face, though. Happy that this was likely my last Thursday night trip to Wal-Mart, that my blood pressure is ok, and that when a hula-hoop beckons me from the aisles again, I'll know exactly what to do.
Posted by Stephanie Gallman at 9:35 AM