Day 255's thing I'd never done before was to see Blitzen Trapper and the Moondoggies at the Variety Playhouse.

That FF invited me to the concert was a relief on many levels. I said, "Yes," immediately, pleased that seeing live music was on his list of "likes."

We hadn't yet had the inevitable, "Defining your relationship with Nickelback," 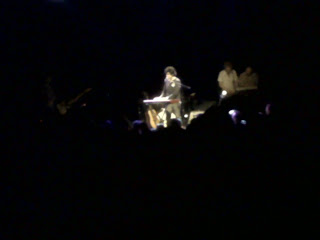 conversation either, and so I still wasn't sure if I was willing to take this relationship any further. His invitation to a concert gave me a perfect segue to talk about music.

Plus, I'd tapped into the fact that he was willing to leave his own neighborhood for the wilder side that is Little 5 Points, a trait that some of the other guys I've dated haven't always been so willing to do.

Before we went to the concert, I did some investigating on the band, and discovered that they're really cool.

So cool, in fact, that I wasn't the only person I knew with plans to see them that night. I ran into several friends, including my ex-boyfriend, that I hadn't expected to see. My complete shock and subsequent anxiety about these sightings was, now that I think about it, ridiculous. My friends like live music; of course they would be there! But still, I usually wait until much later for my world's collide, but here they were colliding, without my control, right at the Variety Playhouse.

I handled this unexpected run-in with all the grace and class of a bull in a china shop, vigorously drinking canned Pabst Blue Ribbons to quell my nerves and making hasty introductions and even hastier conversations with wild hand motions for the next couple of hours.

I later apologized to FF and explained why I was acting weirdly. He shrugged it off, and added, "Oh I wondered why it looked like you ran full speed into a screen door when we approached the stage."

But at least the bands were great. They really were. I think.
Posted by Stephanie Gallman at 8:28 PM