There is a sign taped to my computer at work that says, "29 to 30 Jackass." This is the story of how it got there. 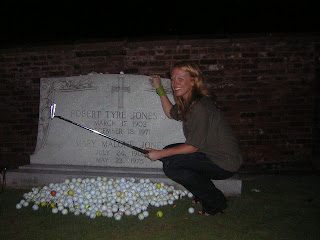 Mo had, during his last hours of work, recruited some of our colleagues to get together for dinner at Six Feet Under, a restaurant near my house. He tried to sweeten the deal by telling everyone on the email that my blog activity was to be determined, and that anyone who came along would most certainly be tagged.

That Mo used this tactic to get people to come to dinner was not surprising, because he and Justin love getting tagged in the blog. But considering the only other people to show up that night were Katy and Nick, I'm pretty sure they are the only ones who really care about winning the, "Let's see who can get the most tags in Stephanie's blog," game that they invented.

So there were just five people total in our party. Don't be fooled, though, where we lacked in numbers, we made up for in complete dedication to fun, and to the blog. 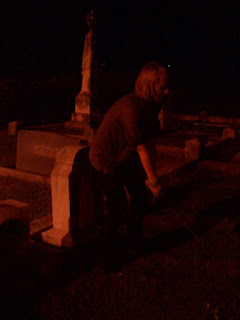 We sat on the deck at Six Feet Under overlooking Oakland Cemetery. After talking about work for the first few hours (which we always do), the conversation shifted to the blog, and what I would do, with their help, as the thing I've never done before.

Moon someone, play credit card roulette were some of the suggestions that were thrown out.

Or, Mo asked me, glancing over my right shoulder, "Have you ever been to Oakland Cemetery?"

"Yes," I said, "Remember on that cold, rainy day in January? That place is depressing."

"Have you ever snuck into Oakland Cemetery after dark? You should putt a golf ball on Bobby Jones' grave."

I don't remember who spoke these words, or how the entire group decided that this was the right thing to do, but the next think I knew, I had retrieved my putter from my golf bag in the trunk of my car, and with a boost from Mo, I was climbing over the brick wall that surrounds it.

Day 269's thing I've never done before was to sneak into a graveyard and putt on Bobby Jones' grave.

Before you stop reading, disgusted with the fact that I could've defaced someone's grave at night, 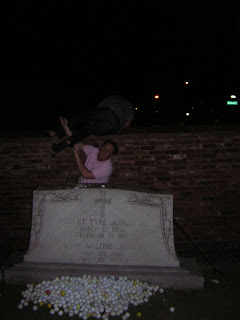 especially a member of Atlanta royalty like Bobby Jones, please understand that there is actually a cup on the grave and a pile of golf balls left by those paying their respects. I brought my own golf ball and club, but had I forgotten them, there were plenty of balls and clubs to choose from. We may committed some disrespect having snuck into the cemetery, but putting on this grave apparently isn't frowned upon it's encouraged.

Now, I haven't been shy throughout this project about the fact that my golf game needs a little work. When I sunk a putt on a PGA golf course, it took me four (err, maybe five) tries to get it in, and when I played a full round with my dad, I did a better job at swearing than I did at playing.

Not surprising then, that my golf game did not improve in the dark, after a few cocktails. in a graveyard we weren't supposed to be in. My game was downright terrible, as a matter of fact.

After several tries, too many to count, I finally got the ball in the cup and hit a couple more for good measure. And then it was time to go. Only making a clean getaway over the brick wall was completely impossible. There was absolutely no way to get out of here with any sort of finesse or grace. I heaved, clawed, grunted my way over, right onto Memorial Drive, a popular road, where cars are constantly whizzing by. I was bruised and sweaty. 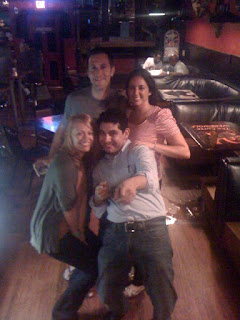 After finally sinking the putt and making it over the brick wall, two monumental tasks at that hour of the night, we probably should've called it a day and headed home. But we didn't. No, we were pretty proud of ourselves and our sneaky ways, so we continued the fun in East Atlanta (to the Graveyard Pub, no less).

When we arrived, eager to play some of our favorite hits on the jukebox, we were disappointed to find that the machine was "broke." Not "broken," but, according to whoever wrote the sign that was taped to the music box, "broke."

I stole the "broke" sign and taped it to my forehead, because Project 29 to 30 has made me just that: broke. Lucky for us, Katy came prepared with her iPod, hoping she could convince the bartender to play the oldies she was dying to hear. Whatever she said, worked, and we all got down to raging songs like, "Jimmy Mack," by Martha and the Vandellas.

After wearing out our welcome there, we took the party (read: the debauchery) to Mo's house for late-night, "Club Mo."

Did I mention that this was Wednesday? And that I'm 29?

Yep, I'd say that about sums it up.
Posted by Stephanie Gallman at 9:10 AM